My Weeks with The Jim Henson Hour, Part 4: Dog City 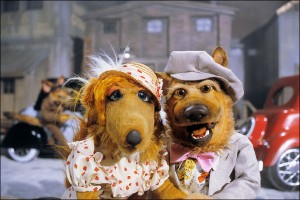 The 1980s and early 1990s saw a rash of mafia-based comedies, including Amy Heckerling’s Johnny Dangerously, Jonathan Demme’s Married to the Mob, Nora Ephron’s My Blue Heaven, and Andrew Bergman’s The Freshman. I mentioned them not because they are all masterpieces (although The Freshman is pretty great), but simply to point out that “Dog City” entered a crowded field. At first glance it might seem unusual that Jim Henson decided to make a gangster spoof in 1989. But for whatever reason, he was just one of a much larger pack.

Pack, get it? That’s a dog joke, son. Like Ryan mentioned in his previous review of this episode’s DVD release, the show is full of them. It’s positively overflowing with hairy, slobbering dog jokes. You can’t throw a stick without fetching one. I could go on like that all day, but I’ll stop there because “Dog City,” as hilarious as it is (and it’s plenty hilarious – I laughed loudly and frequently while watching it) is so much more impressive than a simple collection of puns.

The story is simple. Our hero is the altruistic Ace Yu (Kevin Clash). Ace inherits a tavern from his Uncle Harry, only to find out that the town is controlled by ruthless, senseless gangster Bugsy Them (Jim Henson). When Ace declares that he’ll use his earnings to start an orphanage rather than line Bugsy’s pockets, Bugsy gets real mad and swears revenge.

It’s a familiar story, straight out of a classic Warner Bros. gangster movie. But it works as a Muppet production because it’s emulating a particular kind of WB gangster film, and not the best kind. The best ones are those like Little Caesar and The Public Enemy where the gangster himself is the lead. “Dog City” is closer to something like Dead End where a law-abiding citizen is the hero and the gangster is relegated to playing the antagonist.

Like all fans of classic crime movies, I’d rather cheer for charismatic criminals played by Edward G. Robinson or James Cagney than watch boring old Joel McCrea get the best of Humphrey Bogart. But in the Muppet version, it’s key that Ace is the main character, because his status as an honest and decent person allows them to do all these weird, dark jokes.

And “Dog City” has an awful lot of weird, dark jokes. 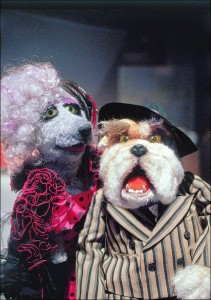 At heart, it’s one of the darkest things Jim Henson did in his entire career. The script never holds back from portraying Bugsy as a real criminal. He’s a ridiculous one, but everything about him – from his love of “senseless” violence to his insecurities over the handsomeness of his tail – is rooted in the kinds of problems that a live-action movie gangster might have. As a performer, Jim Henson really cuts loose, playing Bugsy as an unhinged maniac.

If Bugsy was the main character – if Henson the director asked us to take his side – it would be terrifying when he threatens to let his henchmen play with Ace’s bone structure, or when he beats Ace with a newspaper, Al-Capone-with-a-baseball-bat style. It would be too much for a Muppet production to handle. For all of Ace’s heroic qualities, though, his backstory is just as dramatic. He clearly suffers from PTSD, and his description of the “mean, evil laugh” of sheep and his descent into using ever-harsher punishments on them is genuinely heartbreaking.

Yet somehow, it’s okay to laugh at all of that, and not just because Ace overcomes his inner struggle and Bugsy gets defeated in the end. It’s because Dog City strikes the most astonishing balance between comedy and drama. It takes the stakes absolutely seriously at all times. The situations are all given the gravity they’d have if this story starred humans. But they’re also made into ridiculous jokes, with both tones often occurring at once.

Here’s a good example: When Ace’s girlfriend Colleen (a delightful Fran Brill) is kidnapped by Bugsy, Ace cries out “Colleen! Stay! Stay!” followed by a sorrowful “Dog-gone.” To the audience, those are silly dog jokes, but to Ace they’re just the cries of a desperate boyfriend. It’s funny and sad at exactly the same time, and the special strikes that tone over and over.

That tone is aided immensely the presence of Rowlf as the narrator. Even if Rowlf wasn’t the same species as the rest of the cast, he’d still be a better choice for that role than the usual Kermit. It’s hard to imagine Kermit (especially the stately Kermit of 1989) gleefully unleashing so many terrible Dr. Bob-style puns, but it’s even harder to imagine him wagging his eyebrows at all of the more adult jokes the way Rowlf does. And yet, it’s still good old Rowlf from The Muppet Show, assuring parents that it’s all right for their kids to watch this special that has winking nods to torture and prostitution. 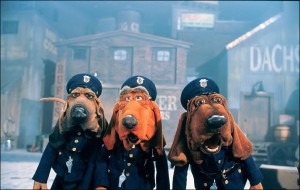 But the real key to the show’s success is Jim Henson’s dedication to making it feel an actual motion picture, not a TV special. The costumes are all wonderfully detailed, the lighting gives it a genuine noir atmosphere, and the sets are beautiful. Of course, after all this time we’ve spent staring at that same static shot of the Muppet Central control room, just about anything would look beautiful by comparison.

It’s more than that. The sets all looked lived in. This looks like a city that’s been through theringer, and that extends to the cast. This is a really well-populated city. Much of the time, a dozen or more dogs are on-screen at once, and they all have individual personalities. It’s easy to imagine the camera following any of the bar’s patrons home and showing their stories instead of Ace’s. It’s a universe of silly dog puns, yes, but it’s one you could get lost in.

Before we see a frame of “Dog City” proper, this episode of The Jim Henson Hour spends ten minutes building it up as “a movie.” Jim and Kermit both tell us that it’s “Muppet night at the movies,” and Jim’s intro consists of a fake theatrical trailer for the movie we’re about to watch. That’s a very shrewd move, and I’d read it as cynical if it were done for something that didn’t deserve the buildup (it also gives us some great new material from Jerry Nelson as the announcer, so that’s a nice bonus). 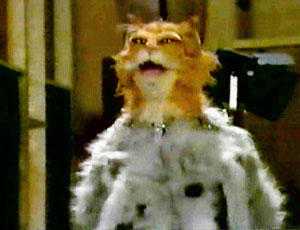 “Dog City” takes on an even more mythic quality over the next ten minutes, as various charactersrun around Muppet Central looking for the film. This pays off with a cheap joke (“It was in the film library under D”), but really it’s an excuse for the show to give its audience a much deeper experience. We get two more pre-show trailers (emulating a theatrical experience), an announcer on the All-Dog Network calling Dog City an all-time classic, and a special peek behind-the-scenes. I’m not going to claim that all of those things are successful as comedy, but they all contribute to sending the same message: “This is a movie. It isn’t some lukewarm TV special like Lighthouse Island.”

The finished product on screen lives up to that claim. Denying that would just be senseless. 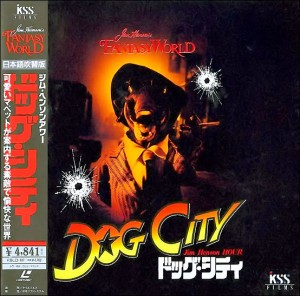 Click here to be laughed at by sheep on the Tough Pigs Forum.