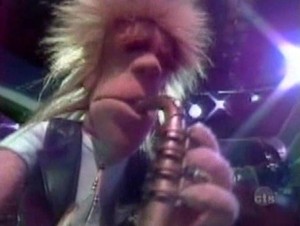 Last week, I mentioned that MuppeTelevision felt like it was falling back on things that had worked on The Muppet Show a decade earlier. With this episode, the show comes a lot closer to finding a voice of its own. I wouldn’t necessarily claim it’s more entertaining than “Fitness,” but it’s definitely a much better of example of the kind of show that The Jim Henson Hour wants to be.

And what kind of show is that? A show that makes the era’s technology an essential part of its humor. And finally, at long last, a show that lets the guest star effectively interact with Muppets. A show that both highlights fun new characters and finds interesting ways to use old ones. This episode does all of those things wonderfully.

The opening number, “The Music Just Keeps On Rolling Along,” is one of the catchiest songs they did in the series’ brief life. But more importantly, it’s nothing like the Electric Mayhem. They wouldn’t have been caught dead performing this synth-heavy 80s song, and that goes a long way towards making Solid Foam seem like a band with its own identity. It’s easy to imagine them coming back to perform more songs in this vein.

They also get a chance to shine as individuals. Beard, Clifford, and Flash all take turns singing lead, and they even get to star in the cold opener. The gags about Flash’s tardiness and his excessive groupies aren’t especially hilarious, but they are a step towards making him into a personality instead of just a puppet that kind of looks like Steve Whitmire. 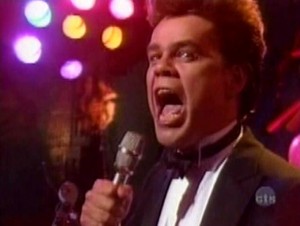 Even better, the opening number sets up the central conceit of the episode – that everything about it is completely fake. This has been obvious from the start, of course. The Muppet Central backdrop is bluescreen, and it has never seemed like a real environment for even a second. But by acknowledging it, the show turns it into an advantage. The Muppet Show was always presented as being spontaneous, and this episode insists over and over that MuppeTelevision is all trickery – as Digit puts it, “satellite feeds, prerecorded, special effects. You know how TV is.”

Digit offers those options when Kermit wonders how the band was able to be across town with Buster Poindexter (on “the guest star channel”) when they had just done the opening number (presumably near the control room). This is another step forward. One of the biggest problems with the show so far has been the lack of direct interaction with the guest star backstage. They talk to Kermit over a TV screen, and it’s awkward every single time. Here they finally solve that problem.

We see Poindexter on a screen twice. The first is the aforementioned appearance with Solid Foam, where they interact naturally and in person. The second is right before the closing number, when his awkward talking head on a TV screen tells Kermit “I wish you could be here.” Through the magic of tape edit, Kermit suddenly appears in the “prerecorded” closing number. It’s a delightful admission that guest stars and Muppets should be in the same room, and I like to think they would have remembered that lesson going forward.

It’s an unspoken part of the joke that Buster Poindexter (a persona of New York Dolls lead singer David Johansen) is as fake as everything else on screen, but that’s just one example of many. The episode is full of little touches that highly how constructed everything is. Kermit admonishes Bean Bunny for “breaking our reality” by leaning out of a TV screen. Beard does a double-take when he appears next to himself during the song. We get one reminder after another that it’s all a ruse. 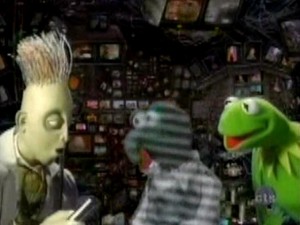 The funniest of these reminders is also the show’s best-ever use of an old Muppet Show character. While he’s away judging a poultry contest, Gonzo leaves a video tape recording of himself as a substitute. The recording is able to predict everything Digit and Gonzo are going to say, it reminds Kermit that he’s seeing some parts twice because he rewound, and it pleads with him not to fast-forward, ending with a forlorn “Now you’ve done it – I’ve come to the end of my tape!”

I can’t stress enough how perfect this is as a marriage between the character and the setting. Unlike the uses of Rowlf, Link, and some others last week, it doesn’t feel like a stretch. This is absolutely something Gonzo would do – he’s always up for finding new ways to alter his body, and removing it completely is a natural extension of that – but it wouldn’t have many sense in the context of a vaudeville theater. But the control room is presented as a place where technology allows any sort of visual trick, so it makes sense that Gonzo would jump on that and find new ways to stretch himself. 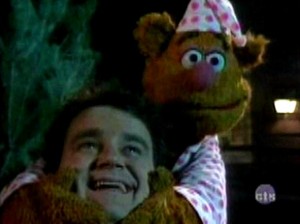 , who drops in to star in a ghost story sketch.

The question of how to integrate Frank Oz’s characters plagued the Muppets throughout the late ’80s and all of the ’90s. He was off directing moderately entertaining comedy films, and his absence left a big hole in the Muppet gang. The general solution to this was “mostly ignore his characters, but whenever Frank is available to perform, act like they’ve been there the whole time.” In later years, this led to awkward moments like the Whoopi Goldberg episode of Muppets Tonight!, where Fozzie frets about his act backstage even though he doesn’t have an act on that series.

This episode’s solution is so much better. He’s still just in that one sketch, but it works perfectly because of the control room gimmick. Kermit is pulling programming from various sources, so it plays like Fozzie is off working on his own career and sent one of his projects back to his old buddy Kermit. As with the “Power” episode, it’s a nice update on Fozzie’s whereabouts.

This is a show that’s doing pretty much everything right, and when it ends, I can’t wait to watch more of it. 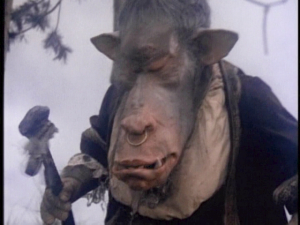 But I don’t get to watch more of it, because I have to watch The Storyteller. And after the high-spirited antics of Buster Poindexter singing “All-Night Party,” that’s the last thing I want to do.

When “The True Bride” started, my wife noted that she doesn’t like the way the show is split. She compared it to watching Labyrinth right after “Elmo Saves Christmas,” and that’s exactly what it feels like. Jim Henson might have felt the same way. He originally pitched the show as a series of rotating hour-long segments, and the show’s final format was mandated by the network. But however it happened, this is the show we ended up with, and this episode is a particular jarring example of the tones not meshing.

I want to watch the Muppets continue to sing and dance and have a good time. But instead I get John Hurt telling me about several instances where our hero Anja (Jane Horrocks) gets flogged by her troll master for doing what he tells her to do. It’s always nice to hear John Hurt say words, but this is resoundingly unpleasant.

It’s a shame too, because the Troll would be a reasonably fun character if it wasn’t for all of the savage beatings we’re told he administers. I like his design a lot, particularly the tiny human-sized eyes, and his speech patterns (“How abstractly infuriating!” and “I recur” when he returns) are memorably odd. But I just don’t care about that guy at all. I’m too busy watching the seconds tick by on my DVD player and wishing for the sweet release of even the worst MuppeTelevision sketch (Boostie and Brad, of course). 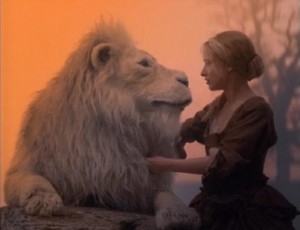 There are plenty of other things working against this episode. It’s the one with the white lion from Jim Henson’s intros in it. Here he’s called the Thought Lion, and he shows up periodically to serve as a deus ex machina and deliver long-winded speeches. The show also suffers from poor acting. Sean Bean and Jane Horrocks are both tremendous actors, but you’d never know it from their stiff work here. As the story rolled on, I started to wish I watching Bean in GoldenEye or Horrocks in Little Voice. It didn’t even have to be anything as good as those, as long as it didn’t have the stupid Thought Lion droning on about boring junk like feathers.

But then about nine minutes in, just at the point where the Troll falls through a doorway to nowhere, something snapped in my brain and I started to really get into it. From then on, I had a blast. The Thought Lion breaks a chain with his mouth! Anja rides through the air on his back! The Thought Lion has magic walnuts with wishes inside of them for some reason!

That’s when I remembered – when I’m in the mood for it, I love The Storyteller. No, the stories don’t make any sense, but they weren’t supposed to. They’re fairy tales, and the show’s appeal is in the weird little moments. This episode’s full of them, from a stream of gems flowing out of a magic walnut to the Troll’s daughter the Trollop having a near-orgasm over the silk she gets from a different magic walnut. It’s all bonkers, and I’m sad to see it end. 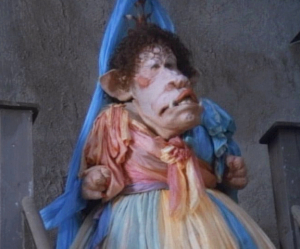 It also really helps that the Trollop doesn’t beat anyone.

On its own merits, The Storyteller is a really solid show. If you have 25 minutes to kill and want to hear a bizarre European fairy tale, you can’t beat it. But as a segment of The Jim Henson Hour, it’s considerably less successful. The tone of the show’s first half made me actively resist the tone of its second. My wife and I both spent the first 1/3 of the episode wishing we were watching something else, and that’s a big problem. Faced with that change in tone, I’m sure most viewers in 1989 didn’t stick around. I certainly wouldn’t have.

Click here to channel surf instead of watching The Storyteller on the Tough Pigs Forum.