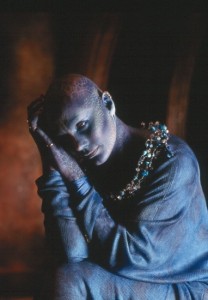 So now I think I’m ready for Friday’s episode, which jumps into the middle of the third season. The third season doesn’t seem that different from the first season, except that it’s COMPLETELY HORRIBLE.

To start with, Crichton, D’argo, Chiana and some Klingon lady land their shuttle pod on a diseased Leviathan prison ship. And oh yuck! This ship has saggy diapers that leak. It’s all dark and drippy, and there’s a bunch of dirty caveman hobo people who keep chewing on everything. Then D’argo meets up with a scary Hannibal Lecter zombie guy, who drills a needle right into his brain!

It just gets worse. Chiana freaks out and starts shooting everything, then lights D’argo’s corpse on fire and throws it off a balcony. Crichton finds a Pilot whose arms have been torn off. Turns out that the Hannibal Lecter guy “copied” D’argo before killing one, and now he’s going to breed the other D’argo to a white-haired dog girl. This is so gross.

God, yesterday, Farscape was all sexed-up and groovy. This is like watching someone pick at a scab.

Here’s the ultimate evidence that this episode isn’t any fun — Crichton gets “twinned” at the end, so now there are two identical Crichtons. And Aeryn looks worried about this, instead of thrilled.

I was actually considering watching more of this show. But is the whole third season all drippy and shouty and scary?

Horror shows are not my cup of tea. I don’t enjoy fiction that presents the marrow of the universe as filled with malice and general ickiness. The only thing of interest for me in the whole episode is the end, showing how the third season ends up with two Crichtons. That’s a plot twist that they do some interesting (and heartbreaking) things with. But the getting there was just too dark for me. I just chalked it up to the Halloween episode syndrome and moved on.

Farscape doesn’t stay confined to a particular genre, and sometimes they cross the border into others — so when someone tunes in, you never quite know what you’re going to see. This episode is their take on a horror story. If it scares you, that’s good. If it scares you away from watching any more of season three, that’s bad. It’s not by any means a representation, but rather a diversion.

Personally, I thought this episode was one of the season’s weaker ones — not necessarily because of the theme or tone, but because Ben Browder goes way overboard in his performance. He can be quite brilliant at times, but in this installment, the director needed to have Ben chained up, not D’argo! The guest characters looked like a comic book artist’s idea of horrifying. But I loved the little teases of the Moya/Crais/Talyn storyline in here.

And, as Rose said, the main function of the episode is to set up the twinned Crichton arc. A soap convention? Yeah. But one that they use to their favor and commit to — the twin isn’t killed in an episode or two. And ya gotta give Aeryn some slack — if my Romeo had been twinned, and all they wanted to do is play rock-paper-scissors with each other, I probably wouldn’t be too happy either. But trust me, Aeryn gets to have her share of fun with one of the Crichtons later… and so do the viewers!

Farscape‘s not for everyone, and what one gets out of the show can be influenced by how much the individual is willing to allow it. They take some chances (and, admittedly, the occasional cop-outs), but they always keep me guessing and interested. They’ve got some wonderful directors and actors, and when they’re given a chance to be an active part of the story, Rygel and Pilot can be as intriguing as anyone else on television. If ain’t your father’s Star Trek; it’s unique — and, as Scorpius would say, “unique is always valuable.”

I haven’t liked everything I’ve seen in this week of Farscape. I thought Monday’s episode was fairly pointless, and Tuesday’s was just straight-up annoying. Friday’s was kind of depressing and yucky, and it dragged a bit.

But I have to give DW and Rose credit for pointing me towards the continuing-arc aspects of the show, and Wednesday and Thursday proved them right. I love soap operas, and I love science fiction — so a sexy, sweaty, shouty sci-fi soap is actually really appealing for me. As much as I made fun of the show this week, I’m still wondering what happens next. How does Crichton get out of the big brain-sucking chair? Does he ever figure out the secrets of wormhole technology? What happens to Moya’s baby? Do the twin Crichtons ever have sex with each other? I have to admit it — I want to know.

If you’d asked me on Tuesday, I would have said that I hated the show. Three episodes later, I’m planning to ask DW to send me some more tapes of the first season.

So, the final score: Farscape Fans 1, Farscape Detractors 0. Good game, guys. Now where are those tapes?