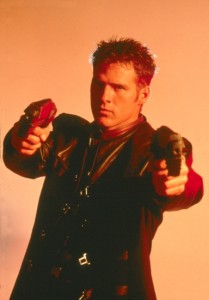 Forget everything I said about Farscape for the last two days.

In today’s episode, a Peacekeeper ship docks on Moya, and out comes a bunch of Australian soap stars, led by Simon from As the World Turns. Simon is one of the most devastatingly handsome men I’ve ever seen, all dark eyes and cheekbones, dressed in a tight black leather outfit and wielding a huge weapon. Then Crichton enters dressed in a black and red leather outfit of his own, with huge black leather boots. I think he’s pretending to be a Peacekeeper captain too, but for some reason, I’m finding it hard to concentrate. Simon gets real close, shoves his weapon in Crichton’s face, and murmurs, “I hereby command your ship, your crew… and YOU.”

Wow. All of a sudden I LOVE THIS SHOW.

Simon is sci-fi sex on a stick. He’s all sweaty and twitchy, and whenever he talks, he stares right into your eyes and talks really low. They keep mentioning exit shafts and infecting people through physical contact. I have no idea what they’re talking about at this point, but I can’t take my eyes away. Simon comes on to Crichton for a while, then moves on to Aeryn. Chiana spills a drink on another Peacekeeper’s crotch, and later on she’s kissing him. Crichton licks his lips and stares hungrily at another Peacekeeper. Everybody’s groping and pushing and at some point D’argo gets chained to a wall. They’re all pointing their guns and shouting at each other.

This is fantastic. Farscape is my new favorite show ever.

Ah yes — a very important turning point for Crichton here — his first attempt at impersonating a Peacekeeper. They say clothes make the man, and once John slips on the uniform, it becomes his regular mode of dress. Gone are the days of the geeky orange flight suit. Sure, there’s a lot of practicality — blending in with the locals, appearing as one of the hunters rather than the hunted, yada yada yada… but it’s also a physical representation in the change of his character. He’s turning away from the confused stranger in a strange land and gettin’ him some “lived here all mah life” attitude. We see that John is starting to pick up some of Aeryn’s toughness, while Aeryn discovers non-military “human” emotions.

But, bottom line… it just makes him look ultra super yummy. He’ll do some overcompensation with outer space hair mousse for a while at the beginning of Season Two, but hey — every Barbie and Ken make some early mistakes while they’re playing with all their fabulous new accessories!