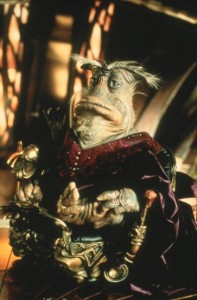 I’m finally starting to understand Farscape‘s appeal. DW suggested on Tuesday that I ignore the “science,” and he’s right. This isn’t a science-fiction show; it’s a soap opera dressed up in science-fiction drag. Although that can be distracting sometimes, viz: the following exchange at the start of today’s episode.

Crichton: “I did it before. I can do it again.”

Chiana: “Yeah. By the skin of your mibbogs.”

The episode jumps into soap mode right away, with Aeryn collapsing on the floor. In our last episode, Aeryn was stabbed by Simon — right in the mibbogs! — and now she needs a nerve transplant or she’ll DIE. Cue the organ music. Crichton puts on his leather-and-buckles outfit again to look for a tissue match at the secret Peacekeeper base.

Safely established at the Peacekeeper bar, Crichton gets his first look at Scorpius, who strikes a pose in the doorway in his big black plastic shoulder pads. In that outfit, Scorpius looks so much like Alexis Carrington from Dynasty that I wanted him to sashay up to Crichton and throw a drink in his face.

Anyway, before you know it, Crichton runs into — dramatic organ sting — his old girlfriend, played by Nicolette Sheridan from Knots Landing. They kiss, and then she gives him a tissue sample. (Although that makes it sound more exciting than it really is.) Her eyes fill with tears as she murmurs, “We always seem to be saying goodbye.” The music swells, it’s a hanky moment. Then Scorpius Carrington comes along, arrests Crichton, and sticks him in a big chair that steals his memories. Soap operas are always so complicated!

Thanks to the big brain-sucking chair, Scorpius catches up on the Farscape reruns in Crichton’s memory bank. Oddly, Crichton’s memories include both close-ups of himself and effects shots of Moya as seen from space. Apparently, they’re doing some nice editing work inside Crichton’s brain. Scorpius also watches some extra scenes from Monday’s episode that we didn’t see, like Crichton’s brain is a DVD packed with special features and audio commentaries. I wish we could watch the show in Crichton’s head instead of the real show; it seems more exciting, and he gets all the cool extras.

Anyway, Nicolette realizes that Crichton loves Aeryn and not her, and she gets all teary again. Crais arrives at the base, and immediately has a big catfight with Scorpius over who owns Crichton. Aeryn is cured, and she and D’Argo have a moment.

I have no idea why this show is on the Sci-Fi Channel, when it so obviously belongs on SoapNet. This is a direct descendant of The Colbys and Falcon Crest — all these pretty people with too many servants fighting like cats and dogs over nothing at all.

In my ideal Farscape, Scorpius would be played by Jane Wyman, sitting behind her big desk and barking: “Soon, I’ll know EVERYthing, and then the winery — I mean, the wormhole — will be MINE.” I’d go magra-farbot.

Yes, this was the episode that we begin to see a new side to Crichton… mmmmm, red and black leather. Oh, right. What was I saying? Yeah, he starts taking control of situations instead of reacting blindly, and in later episodes, he starts wearing this long black leather coat, and striding around purposefully, and then D’argo changes his outfit to one with leather shoulder pads, and he starts making eyes at Chiana, and…

Okay, it IS a soap opera. A big sweaty sci fi soap opera where people and puppets have longings and desires, and they yell at each other, and laugh, and make love, and have babies, and plot, and blow things up, and save each other from horrible icky creatures. The dialogue is fun. The characters grow and change, and damn if you don’t start caring about them. It’s like Buffy the Vampire Slayer, but instead of using a fantasy backdrop and demons as metaphors for life’s journeys and lessons, it uses Science Fiction and aliens and space ships and leather. Lots and lots of leather.

If one was to classify what genre Farscape falls in, the simple answer would be sci-fi… then, if you wanted to be more specific, would fall into the category of “space opera.”

Which is not at all a bad thing. Although the daytime soap industry has tended to sour people’s images of continuing drama, we’ve seen several prime-time drama shows over the last decade adapt more continuous story arcs — which I much prefer than to have everything nice and neatly wrapped up in 45 minutes every single week. Farscape does two things very distinctive to a lot of other sci-fi programs. The characters are allowed to be very “human” — they bicker, get jealous, have power plays, fights, and shifting loyalties. They also put a lot of faith in its audience to pay attention, so they can do a lot of rapid story and character development.

I love Wayne Pygram’s Scorpius because he IS campy but not completely over the top — he mixes just about the right amount of camp and serious menace. The design of the character is mostly great and serves a practical purpose which is explored later, except for those high shoulder pads which don’t serve any purpose than eye-candy. And worst of all… the “tail” in his leather catsuit! He’s a Sebacean/Scarren halfbreed. Neither race has tails. I doubt scorpions would be a known creature in this part of the universe, so to apply the concept so overtly to his name and his design doesn’t work. The tail is totally gratuitous — why have something that an enemy can use to grab onto in a fight? His nurses have it as well. Just silly.