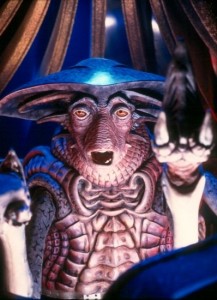 You guys, this is messing up my whole arc.

I had this whole week planned out already. I was supposed to hate Monday’s episode. (Check!) Then I’ll find something that I kind of liked about Tuesday’s episode. I start coming around on Thursday. By Friday, I’m a Farscape fan, we laugh, we sing, we learn an important lesson about life. It was supposed to be beautiful.

But I’m sorry, there’s just nothing to like about tonight’s episode. After a well-written opening scene with lots of character-based conflict — I am willing to concede the excellent opening scene — then all of a sudden everything gets shouty again. The ship splits into four parts; the cast is in crisis-mode. There’s about ten minutes of Aeryn and John running around in circles accompanied by an ear-splitting din.

They don’t know what to do, so they throw technobabble at it. It’s a parallel reality! No, it’s a dimensional schism! Not buying that? Would you believe a molecular diaspora?

How can I defend it? By not getting too caught up in the “science” and watching what the show does with the situation. This episode took some huge artistic risks which is something I admire — they aren’t afraid to push an envelope even if they fall flat on their face doing it. The first quarter, we have a drama where some of the basic elements of communication are stripped away — all of a sudden, the physical realities that the cast takes for granted is suddenly and dramatically changed, and they have to struggle to figure out what the heck happened, what to do about it, where to find everyone else, and how to accomplish this when they can’t hear each other. I like that they didn’t take the easy route and downplay the confusion. Would you rather they conveniently figure out what’s going on from the beginning?

Once you get past the weirdness of the first act, there’s some wonderful character stuff throughout the episode. This is where the crew becomes a bit more unified and bonded — the parallel between the sniping meal scene at the beginning and the jovial meal at the end!

Farscape doesn’t play things safe. One of its hallmarks is to take a sci-fi situation and turn it on its head or add a unique twist to it. It doesn’t always work. I admire that they aren’t afraid to fail. But when it succeeds, it succeeds brilliantly. Stick with it, and you’ll find yourself back on your script! Then later you can watch some of the episodes that bothered you earlier and pick up on some great stuff you missed the first viewing because you were so freaked out!