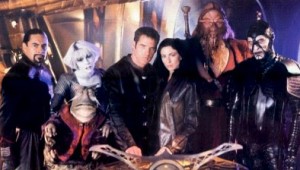 Listen, please! Can anyone hear me? My name is Danny; I’m a Muppet fan. I’m trapped in space and I have to watch Farscape all week. Luckily, I have two friends helping me out — DW McKim, who’s been a Farscape fanatic from the start, and Rose Sage, a recent convert. They’ll help me understand the strange things I find on my journey. I think I’m also being chased by an insane military commander, but it’s hard to tell. It’s really dark up here.

Okay, so let me get this straight. Crichton is in space, right? And he lives on this ship with all these aliens. At the beginning of the episode, they find a wormhole that leads back to Earth. Crichton goes through the tunnel, lands in Australia, and is instantly snatched up by the Bad Government Guys. He talks to his dad about fish, and then all his alien friends show up.

The Bad Government Guys play Alien Autopsy on Rygel, so Aeryn and Crichton beat up some soldiers and escape. Crichton finally figures out that this isn’t real when he notices that all the magazines are seven months old.

So, who knew, turns out that everything that’s happened in the whole episode is a physical creation built from Crichton’s memories to test how humans would respond to the idea of sharing their planet with a bunch of aliens that look like Jar Jar Binks. It wasn’t Earth, it wasn’t his dad, Bobby’s in the shower, Gilligan doesn’t get home. In fact, the whole episode doesn’t even exist. I call a do-over. Sci-Fi owes me one episode of Farscape.

My thoughts when I first saw this episode was that it couldn’t end up being Earth yet… not in episode 16… and that was pretty much confirmed when Rygel was killed… The fun is seeing what they do with it and how they resolve it. And yes, the end DOES feel like a cop-out and that this episode ultimately doesn’t matter. But it will later turn out that this episode ends up being of huge significance; several future plot developments stem from this episode… so you DO get the episode that you’re owed… many times over!

And not all of the episode is a throwaway by itself… that was the real Aeryn with John. She’s now seen a dark version of his world, and that might affect her willingness to go with him if he does find a way back to Earth. Moya’s fugitives now have a new food supply. And most importantly – Aeryn and John actually slept together! (The US version’s editing leaves it open to interpretation… but the extra UK scenes verify that they did indeed “recreate.”)

Damn! So you had to start watching Farscape with the one episode that made me stop watching Farscape back in Season One. Back in the Old Days (1999?), I eagerly waited for Farscape to debut, and then watched the premiere land with a thud in my living room. I watched several other episodes, thinking, “Ah, this is where the rejected Next Generation episodes went to,” before giving up on the series with this episode.

Yes, Danny, this is NOT a good episode. It has the patented Star Trek reset button – though, as my Farscape-loving spouse puts it, not really a reset, but an “exploration” of Crichton’s mind, showing how much the Farscape journey has changed him already. Yup, he’s changed all right. Enough to have a mild hissy fit when they dissect one of his companions. Mind you, it was one of his more annoying companions and a puppet at that, but I expected a little bit more from him than an indignant speech.

Which brings me to the main reason I stopped watching Farscape two years ago: Crichton. Not only did I find the actor playing him unconvincing (come on, this man’s a rocket scientist?), but I found Crichton to be one of the most annoying characters I’ve endured on TV.

Now, either the writing has gotten better, or the actor has, because the current season episodes I’ve watched have intrigued me. Crichton comes along as cranky, sure, but not as wooden, self-righteous and self-involved. Could it be character development? In episodic TV? So I’m determined to slog through these early episodes, bolstered by the current season episodes, the interesting secondary characters, and the assurances of loved ones that these forays do establish important groundwork for the more interesting things to come.