What Were We Talking About? The Answers!

So how do you think you did on the What Were We Talking About? match-’em-up game?  Check out the answers below, complete with links to the original reviews! 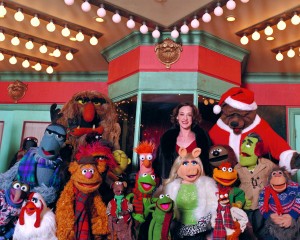 1. “A new Muppet production like this just fills Muppet fans up with energy. It makes us bounce around and hum. It makes us want to go and trade quotes back and forth, and argue about which cameos were good and which were bad. We make lists. We count characters. We generally get down and dirty with our Muppet-fan selves, and just enjoy.” From Danny Horn’s review of It’s a Very Merry Muppet Christmas Movie

2. “Like all good Christmas stories, it weaves together themes of commercialism, charity, and sacrifice. But unlike so many stories written for today’s children, its protagonists are passionate and reckless, sympathetic but tart. Its lessons are far from simple; the villains, after all, walk away with first prize.”  From Peter Papazoglu’s review of Emmett Otter’s Jugband Christmas (the stage musical)

3. “Who is the audience for these books? Joke book enthusiasts? Desperate self-help seekers? Or are we, the die-hard Muppet fans, this book’s core audience, and I just told you not to bother buying it?”  From Joe Hennes’ review of The Diva Code

4. “I wholeheartedly recommend this book to anyone who enjoys Sesame Street, puppets, television, monsters, America, bathrobes, spare keys, rectangles, gum, or none of the above. It’s a keeper… I give this book 5 Mr. Noodles out of 5. And now if you’ll excuse me, I’ve got many questions to ask to a baby.”  From Joe’s review of My Life as a Furry Red Monster

5. “In this one, they will find that the author’s rock-solid plotting has been replaced by tired office humor. Like the first two installments, this one is full of gags that exist only to say, ‘Look how out-of-place this is in a Victorian setting!’”  From Anthony Strand’s review of Sherlock Holmes #3 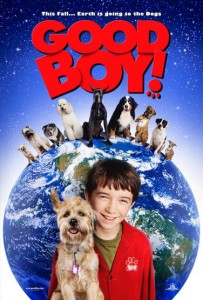 6. “Apparently the target audience for this movie is morons.  I don’t have a problem with that, actually. So it’s a movie for morons. At least it doesn’t pretend to be anything more than it is. Morons need movies too.”  From Danny’s review of Good Boy!

7. “…a fun trip through the smooth Sesame sounds of the 70s, and I really hope they keep releasing these things. But maybe next time around they should try spelling Caroll Spinney’s name right in the credits. It’s been spelled wrong on both volumes.”  From Ryan Roe’s review of the Sesame Street Old School Vol. 2 CD set

9. “Although you may look different, enjoy unusual talents and pastimes, and eat a diet that should almost certainly include your siblings, [title of production] promises that you and your natural enemies can live together in harmony.”  From Michal Richardon’s review of Dinosaur Train

10. “And consider the fact that by the halfway point of the book, Sesame camera operator Frank Biondo has already been mentioned, like, eight times. That’s right — cameraman Frank Biondo is a major character in the book, and that is awesome.”  From Ryan’s review of Sesame Street: A Celebration – 40 Years of Life on the Street 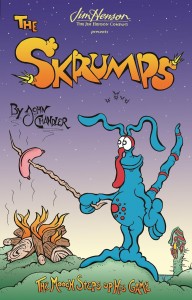 11. “It’s not pretty enough to be a piece of art, it’s not funny enough to be a great kids book, and it’s not clever enough to be a critically revered graphic novel. But more than anything, I’m left wondering what The Jim Henson Company ever saw in it.”  From Joe’s review of The Skrumps: The Mooch Steps Up His Game

12. “’Bullfrog belly breath!’ they say, and then they show me a picture of a bullfrog breathing. Then they cut to a kid moving her arms out and then towards her stomach. ‘Breathe in deep! Now let it go!’ That’s with a shot of a lion stretching on all fours. ‘Cow monkey neck roll! Roll, roll!’ That’s with a shot of a monkey doing a somersault. Then they show the kids rolling their heads around on their shoulders. This is all impossibly confusing.”  From Danny’s review of Animal Jam

13. “Over the course of these episodes, she sticks her face in pancake batter, gets pelted with spaghetti, and is splattered with pies. I look forward to seeing how the Muppets attack their co-star with food in future episodes.”  From Ryan’s review of The Muppets Kitchen with Cat Cora

14. “If you’re thinking, ack, phooey, talking to stars, how corny, then this movie is not for you. Put down the DVD and back away. But if it flickers across your brain, even for an instant, that that sounds kind of sweet, like maybe the movie has Heart, in a sort of ‘I did promise somebody, I promised me’ kind of way, then you’ve got the green light.”  From Danny’s review of Kermit’s Swamp Years

15. “Who else but a Muppet geek would even think to cast Spamela Hamderson, the Muppets Tonight airhead who possesses the most prodigious knockers in Muppet history, as a classic fairy tale princess?”  From Ryan’s review of Muppet Snow White #1

16. “The Muppets sounded and acted like Muppets. There was comedy and heart. And there were times when it really felt like it could have been from the era of the original Muppet movies.”  From Joe’s review of A Muppets Christmas: Letters to Santa

17. “Deep down, this is what fans want the show to be all the time — everybody we love is there, all together.  It also happens to be a perfect expression of what Sesame Street is doing well these days. Just having Grover front and center feels wonderful.” From Danny’s review of The Street We Live On

18. “The characters are cute, yet instantly recognizable, and they’re all-around fun, which is exactly how a Fraggle Rock comic book should feel. In just six pages, we get a glimpse at what makes both Gorgs and Fraggles happy, as well as the insecurities of most of the characters involved. If that doesn’t scream Fraggle Rock, I don’t know what does.”  From Joe’s review of Fraggle Rock #1

19. “I started to suspect that things were going downhill when I could actually understand something the Swedish Chef said. And the situation only got worse. Have you noticed that I’ve not mentioned the Muppets much? That’s because [title of production] didn’t either. Zac Efron got more play, and he wasn’t even there.”  From Leah Hooper’s review of Studio DC

20. “This is really the first Sesame app to make extensive use of both the touch screen and the accelerometer, which is nice because my #1 and #2 hobbies happen to be touching things and shaking things.”  From Ryan’s review of Bert’s Bag

Either way, thanks for playing!  As it turns out, we’ve written a lot of reviews in ten years, so I actually have enough quotes to do a sequel to this little article sometime in the near future.  So keep an eye out for that… and we’ll keep an eye out for new Muppet stuff, because without it we wouldn’t have anything to shoot our mouths off about.

Click here to be out of place in a Victorian setting on the Tough Pigs forum!