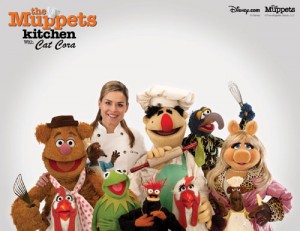 So, Disney’s been doing a pretty good job of keeping the Muppets in front of people’s eyeballs, and it seems to be working — I’ve lost track of how many Google alerts I’ve received over the past year for blog posts called “The Muppets are making a comeback!” with links to their YouTube videos. It seems like most of these people are folks in their 20s and 30s who grew up with The Muppet Show, and who would be likely to buy a ticket to the new Muppet movie when it finally arrives in 2011. These people love the Muppets doing funny music videos.

And now Disney brings us an online Muppet cooking show, and the obvious question is: Why a cooking show? The Muppets are good at comedy and musical numbers, but they’ve never been famous for making dinner. And can the Muppets really be themselves when they’re concentrating on recipes? 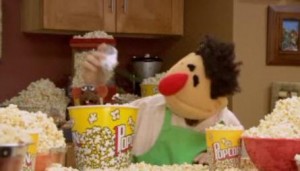 Actually, there are two new Muppet cooking shows. I’m going to focus on The Muppets Kitchen with Cat Cora, which has longer episodes and more Muppets than Hasty Tasty Cooking Tips with Cat Cora and the Muppets, which is shorter and only features Pepe (who is also short, and is apparently producing the show), Cat Cora, and Angelo.

But wait a minute, who’s Cat Cora? As it turns out, she is not a cat. Apparently she’s a lady who cooks things, she was on Iron Chef America, and Disney likes her enough to pair her with the Muppets. And who’s Angelo? He is not a cat either. Angelo is a new Muppet character, an Italian chef with a goofy accent and human hands like the Swedish Chef’s. Naturally, lots of fans have been complaining: Why not use the Swedish Chef? The answer to that question is that the nobody can understand anything the Swedish Chef says, which is why he’s hilarious, but which would also make him a terrible co-host for a cooking show, or any type of how-to show, unless it was about how to throw spoons.

These are the worst hair extensions ever.

Angelo can speak English, and he’s performed amusingly by the talented Muppeteer Tyler Bunch, but the weird thing about him is that he doesn’t really seem to know anything about cooking. As Tough Pigs’ own Evan pointed out on our forum, there’s really no reason for the new character to be a chef, because Cat Cora knows all the recipes, so Angelo ends up standing there and reacting to her explaining things. His design is also questionable… He’s just not that memorable-looking, and the eyebrows-with-no-eyes look hampers his expressiveness and only invites more comparisons to that Scandanavian guy.

When you go to the show’s website, the first episode that loads automatically is “Birthday Cat-astrophe.” In this episode, Angelo wants to surprise Cat with some food for her birthday, so he locks her in the pantry and gets Gonzo and Fozzie to help him. At first I thought this was an odd choice for a first episode, because a) Cat Cora is offscreen until the very end of the episode, and b) Angelo is in drag the whole time, because he’s trying to anticipate how Cat will react to the surprise. Isn’t it a strange choice to introduce your two stars that way? But then I realized that they did it because a) Cat Cora does not have mad comic skillz, so her acting actually seems better from behind a closed door, and b) Gonzo and Fozzie are familiar characters, so it’s best to start with an episode that features them heavily.

Aww, this would have been a great picture if Angelo hadn't blinked.

It’s no surprise that of the four episodes that have been posted so far, the weakest one is “Breakfast Isn’t Just for Breakfast Anymore,” the one that barely features any other Muppets besides Angelo — or maybe I should say it bearly features any other Muppets, because there’s a brief “Bear on Patrol” sketch starring Fozzie, which is fun. (Although I’m still getting used to the whole digital-removal-of-puppeteers thing… When a Muppet pumpkin rises above the bottom of the frame, I expect to see an arm-sock, but instead there’s just an empty void. Spooky.)

It’s also the opposite of surprising that the non-cooking portions of the show that are the most fun to watch, like the terrific “trailer” for a horror film starring Bunsen and Beaker in the episode “Movie Night.” The best episode of the four is definitely “Game Day,” and yep, it’s the one with the most Muppet characters. There’s some kind of cooking nonsense involved — something about a seven-layer dip — but the good stuff comes with seeing Kermit, Gonzo, the chickens, and even Rowlf in a brief cameo, presenting the Muppet Y Games, a sporting event whose opening ceremony includes a poultry orchestra and the March of the Penguin. The whole thing ends with Cat Cora participating in the pie-catching event. 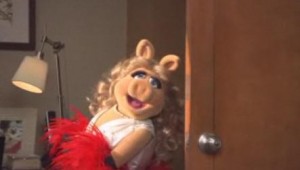 Piggy makes a grand entrance... from the pantry. Awesome.

You know, I dissed Cora earlier, but at the very least she’s a good sport. Over the course of these episodes, she sticks her face in pancake batter, gets pelted with spaghetti, and is splattered with pies. I look forward to seeing how the Muppets attack their co-star with food in future episodes. They could even solicit viewer suggestions. I want to see Cat Cora covered in orange Jell-O!

So it’s still strange that the Muppets are on a cooking show, but if they’re going to do it, I can’t really imagine it going any better than this. By pretty much ignoring the recipes, they manage to be themselves, mostly. Piggy’s too much the one-dimensional “What did you say? HI-YA!” version of herself, but Gonzo actually does a daredevil act, and I think we can all agree that that’s better by a heaping teaspoon than watching him sing about how sad he is that he’s not Kris Kringle.

I’m still not exactly sure who these are for, though. I guess moms can watch them with their children and then make the recipes together… and then maybe they’ll run out and buy a bunch of Muppet DVDs to watch together, but hopefully only after they turn off the stove. But now that we’ve seen what a Muppet cooking show looks like, I’d like to see some new, non-music video sketches with the whole gang, but minus the kitchen. And without Cat Cora. Sorry, Cat.

Oh, and one more thing: At the beginning of “Game Day,” a bunch of Muppets run around the kitchen to demonstrate that the Muppets don’t play normal sports. I would really love to know exactly what sport this purple Frackle is playing that involves chasing a chicken with a flyswatter. 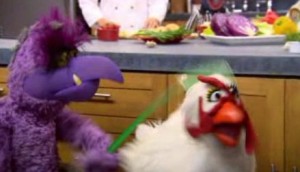 In five years this will be the national pastime.