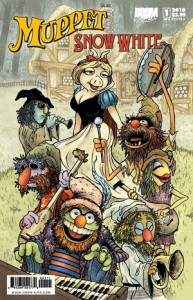 On Wednesday, May 19, Boom! Kids released Muppet Snow White #1, the first issue of the latest Muppet adaptation comic. It is an entertaining comic book.

You know, we’ve been speculating recently about Jason Segel’s exact level of Muppet fandom. Is he enough of a Muppet geek to be handed the awesome responsibility of writing the next Muppet movie? Should that be a prerequisite? It might seem like an obvious requirement to us, but to a nervous Disney executive, a screenwriter’s ability to identify Marvin Suggs is far less important than his ability to turn in a viable script that will sell movie tickets.

With Muppet comic books, though, the stakes are different, and it’s been pretty obvious that a most of the folks writing and drawing them are pretty darn geeky, with their callbacks to old Muppet jokes and their inclusion of super-obscure characters. And yet, being a Muppet-lovah is really not enough to be a good writer of Muppet stuff, so Boom’s responsibility is to find writers who are passionate about the characters and capable of assembling a good comic book. Jesse Blaze Snider and Patrick Storck are the dudes writing Muppet Snow White, and by every indication they’ve given us in various interviews, they rate pretty high on the Muppet Geek Scale. 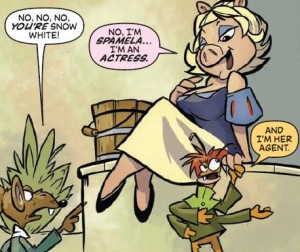 Who else but a Muppet geek would even think to cast Spamela Hamderson, the Muppets Tonight airhead who possesses the most prodigious knockers in Muppet history, as a classic fairy tale princess? Nobody’s ever heard of Spamela! In fact, I wonder how many people will see this book on the rack at the comic book store and assume that’s just a more shapely drawing of Miss Piggy on the cover.

But anyway, how’s the comic? As it turns out, Snider and Storck’s exact level of Muppet fandom works in the comic’s favor. Muppet Snow White #1 takes a few pages to get into a groove, but once it gets going it doesn’t stop grooving until the last page. Of the previous Muppet adaptation comics, the tone comes closest to King Arthur, as the writers’ goal seems to be a joke in every panel. More than any of the other adaptations, it aims for the classic formula of “The Muppets Put on a Show, But They Don’t Really Get It Right, and We Laugh Because Their Failure Is Funny,” and they pull if off pretty well.

Rizzo and Gonzo, as the Brothers Grimm, are our storytellers, but they never have control over the story because all the other characters — including Kermit as the prince, Piggy as the evil queen, and Fozzie as the magic mirror — pretty much do whatever they want. The members of the Electric Mayhem appear as the Seven Dwarfs, and Pepe’s in the story as Spamela’s agent, because why not?

Shelli Paroline’s art tends toward the expressive rather than the realistic, and it’s a good fit for the irreverent tone. Somehow I get the feeling this story would be hindered rather than helped if the illustrations were strict puppet likenesses.

I approve of the “Jokes first, story second” philosophy of the writing here. Seeing Muppets playing famous characters is nice, but what we really want to see is Muppets being funny. As long as Boom! keeps hiring creative teams who remember that, we’ll be in good shape. Maybe we’ll even live happily ever after.

Click here to complain about Spamela’s singing voice on the Tough Pigs forum!