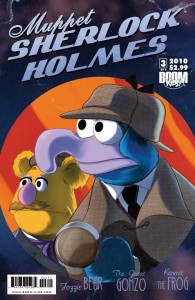 This week, BOOM! Studios released Muppet Sherlock Holmes #3, the penultimate issue of the fifth entry in the “Muppet Classics¨ series of adaptations. The comics so far have fallen prey to the same curse as the Star Trek films: the even-numbered installments are terrific (including the charming and exciting Muppet Peter Pan and the hilarious and unpredictable Muppet Snow White) while the odd-numbered series have been disappointing (including the mediocre Muppet Robin Hood and the unmemorable Muppet King Arthur).

It’s not that the latter have been unreadable. They just haven’t been up to the standards set by Peter Pan and Snow White. For its first two issues, Muppet Sherlock Holmes continued to follow the curse, delivering a modest level of entertainment.

Fearing I might end up rehashing the thoughts of my colleagues Ryan and Joe, I decided to approach the third issue in a different manner. Like the previous two, it loosely adapts an actual Sherlock Holmes story. In this case, that story is ¨The Red-Headed League.” I decided to read the original Arthur Conan Doyle story first. The comics haven’t worked as Muppet stories for me, so I wanted to see if they work better as adaptation of the tales.

For the most part, I shouldn’t have bothered. The two have little in common. The comic takes the story’s basic set-up, and eventually wanders back around to its resolution. But it disregards the actual detective work and most of the clues in favor of another undercover plot, this time an excuse to put all the characters in red wigs. On the one hand, artist Amy Mebberson is terrific as usual, and her rendition of Kermit in an afro is hilarious.

On the other hand, why bother adapting “The Red-Headed League” if you aren’t going to present that story? I understand that the Conan Doyle’s plots twists might be too complex for a 22-page Muppet comic. But so much has been changed that the story is unrecognizable. In a good adaptation, fans of the source material can have fun seeing how it compares, even if that involves noting the changes.

In this one, they will find that the author’s rock-solid plotting has been replaced by tired office humor. Like the first two installments, this one is full of gags that exist only to say “Look how out-of-place this is in a Victorian setting.” Holmes has a pizza at his house, for example, and a 19th-century businessman talks about 4th quarter projections. These jokes have nothing to do with Sherlock Holmes or the Muppets. They’re just lazy anachronisms, and the book is full of them. Rather than mining the situation for humor, writer Patrick Storck actively pushes against the situation. It almost seems like he would write about anything else in the world before he’d write about Sherlock Holmes.

That would be fine if he wrote the Muppets in a way that made them feel like themselves. Sherlock Holmes fans probably aren’t going to read these comics anyway, so it’s understandable that the focus is on Muppet-style wackiness. The real mystery of the comic, then, is ¨Why isn’t there very much Muppet-style wackiness?¨ Too many of the jokes are merely puns that could come out of anyone’s mouth and have little to do with the characters. 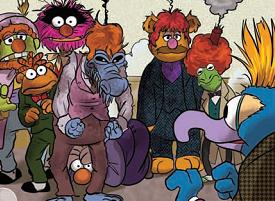 This is especially tragic because, as my reading of the original story convinced me, the two leads could be perfect for their roles. In the case of Watson, he writes while on a stakeout of his “ìnerves worked up to a pitch of expectancy” waiting for something to go wrong. If that doesn’t describe Fozzie Bear every time he’s about to do his act, I don’t know what does. Sadly, we see little of that side of the bear here, as he’s reduced to a simple joke machine.

Gonzo should be even better as Holmes. Watson writes at length about the dual nature of his friend’s personality. Specifically, while playing his violin, ‘his gently smiling face and languid, dreamy eyes were as unlike those of Holmes, the sleuth hound, Holmes the relentless, keen-witted, ready-handed criminal agent, as it was possible to conceive.” This, to my mind, is very similar to the difference between the hyperactive daredevil Gonzo and the dreamy, contemplative Gonzo of “I’m Going to Back There Someday.” At one point in the story, Holmes even sums himself up in a way that could absolutely also apply to everyone’s favorite Whatever: “My life is spent in one long effort to escape the commonplace of existence.”

Sadly, the character in this book is neither of those people. If he were the Holmes of the story, he would show up at his employer’s address and gather clues without the young assistant even remembering he had been there. If he were the Great Gonzo, he would thrill at the danger of the job’s every move. Instead, this is a third, unrelated character; one who makes a fool of himself in front of his colleagues not with an ambitious act, but by engaging in a parody of modern-day motivational speakers. Neither Sherlock Holmes nor Gonzo would ever do such a thing, so why does a supposed combination of the two?

So, in conclusion, the jokes aren’t funny, the story isn’t Sherlock Holmes, and the Muppets aren’t themselves. Who exactly is this comic book supposed to appeal to? I really, honestly do not know. Both properties have been much better served in the past, and undoubtedly will be in the future. Sherlock Holmes fans are currently getting their fix with Steven Moffat’s Sherlock, which just finished airing here in the United States on PBS. Here’s hoping that we Muppet fans will get something that great with the next volume of “Muppet Classics.” If all goes as planned, it should be as good as Star Trek VI: The Undiscovered Country. That will truly be a treat for us all.