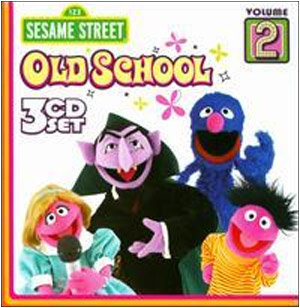 Good news for people who remember listening to Sesame Street records on vinyl: The three-disc CD set Sesame Street Old School Volume 2 is now available at your local record store (which no longer sells vinyl. And probably no longer exists).

This second volume contains three classic Sesame albums in their entirety, and it’s a highly enjoyable listening experience… In fact, my only complaint is with the packaging. The CD sleeves are nifty recreations of the original record sleeves, but the case is too big to hold all of them, so this happens every time you pick it up: 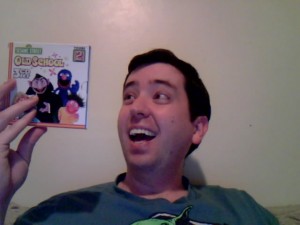 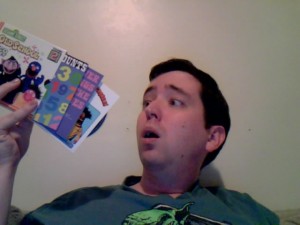 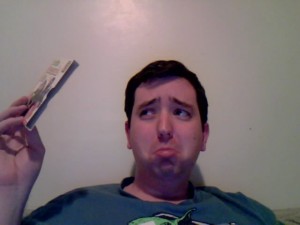 But other than it’s great. 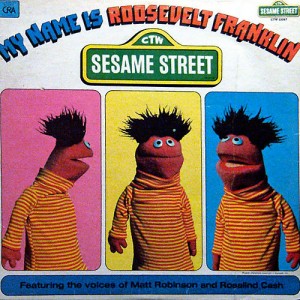 The first disc in the box set is My Name Is Roosevelt Franklin, originally released way back in 1971. This is the most unusual album in the set, and one of the more unusual Sesame Street albums overall. None of the human cast members appear, and the only Muppet characters from the show are Roosevelt and his mother. All the male characters are voiced by Matt Robinson, and none of them except Roosevelt were ever seen or heard from again. But it’s really funky, and many of the songs come with a message about tolerance or self-esteem or getting along. I can only assume this was pretty revolutionary stuff coming from a puppet in 1971.

From the opening notes, you can tell this is going to be a groovy record. Mr. Franklin introduces himself: “Peter Piper picked a peck of pickled pig feet. But my name is not Peter Piper. It’s Roosevelt Franklin, and I live on Sesame Street.”

The first song is “Roosevelt Franklin Counts,” sung by Roosevelt and his mother, who can’t find him no matter which way she looks with both eyes (the album is full of turns-of-phrase like that). In this song we hear that when Roosevelt turns six, he plans to get his first job, haulin’ bricks, which makes me question child labor laws on Sesame Street.

Then some kids learn the days of the week from Roosevelt, but only after they promise to make him some string beans. After that, Roosevelt’s pal Mobity Mosely sings the months of the year. But can kids learn from a character who’s so hard to understand? “Mobity-mo-mo-mo-mo-mo-me, March is the month that I must see,” he sings, and it’s hard not to wonder if Matt Robinson was making some of this stuff up as he went along.

• “A Bear Eats Bear Food,” which explains that that’s the food a bear eats, and that “no living things by any kind of name are the same.” I’m not sure what the message of this song is. It’s sort of about individuality, maybe? But then it seems to emphasize that all bears eat bear food, so all bears must be the same, right?

• “Old King Midas,” which sounds more like a traditional Joe Raposo song than any of the other tracks that Raposo receives musical composition credit for. Poor King Midas.

And then the Roosevelt and his mother review the alphabet, and he declares, somewhat pompously, “What Roosevelt Franklin does not know, nobody knows, and that’s how it goes!” And then he’s outta there.

The next album in the set is Grover Sings the Blues, originally released in 1974. It’s sort of Grover’s greatest hits record, and I was pretty happy to see it included here, as I listened to it a million times in my childhood.

One of the most notable tracks on this one is “Grover Takes a Walk,” in which Grover asks you to close your eyes and imagine that he’s very tiny and taking a stroll on your person, and then he narrates his journey. This is why Grover’s last girlfriend broke up with him, by the way; she felt like he was always walking all over her. Heh. Anyway, it’s an unusual concept, but when I was a kid I really loved the idea of having my own miniature Grover come visit me. It’s also the kind of thing that could really only exist on a record… TV is a visual medium, so it wouldn’t make sense to have Grover tell you to close your eyes for five minutes on the show.

This album also demonstrates Grover’s odd, previously unexplored affinity for cows. In “Name the Animal,” he plays a game with all the other Muppet characters where he tries to guess what animal they’re pretending to be, and he keeps guessing they’re cows. In “Has Anybody Seen My Dog?” he is certain at one point that he’s found the dog lost by his friend Marty,* but in fact it’s a cow. And in “The Question Song,” performed by Grover and “A Little Girl” who might as well be Prairie Dawn, he thinks all the answers to the titular questions are cow-related. It’s only fitting, I suppose, that Grover rode a cow in the recent “Smell Like a Monster” video.

(*By the way, how tragic is Marty? As far as I know, “Has Anybody Seen My Dog?” was his only appearance, which means he was created for the sole purpose of losing his beloved pet and being really, really sad about it.)

• “Four Furry Friends,” with Herry gathering Grover, Cookie Monster, and Oscar to sing a song about the letter F. This song is notable for two things: The hilariously bad singing, and the strange fact that while Oscar’s voice is nowhere to be found during the song itself, a monster voice by Joe Raposo is.

• “Still, We Like Each Other,” a live track with Grover and everyone’s favorite Sesame kid John-John. Grover likes to eat peanut butter. What does John-John like to eat? BUY THE CDs AND FIND OUT! But hey, why is the track credited to “Grover and Little Boy?” when John-John would be such a draw? If you got Beyonce to guest on your song you wouldn’t credit her as “A Woman.”

• “Over, Under, Around, and Through.” This one starts with Grover asking, “Do you know what goes around? This record goes around! So when I sing about around, look at the record.” I’m really glad they kept this stuff in, even if today’s kids have no idea what a record is, on account of they’re physically incapable of being aware of anything that happened before they were born. Grover gives it everything he’s got to make sure we understand the concepts here, and he’s exhausted by the end. I just now realized that he’s much more dedicated than most teachers I had in school.

• “Just Because.” This is a sketch about Grover trying to discern the identity of the letter Y. The writing credit for this one reads Henson-Juhl, and that’s really all you need to know.

So over the course of this album, Grover is playful, silly, funny, caring, imaginative, and educational. I challenge you to name one other artist with a greatest hits record that can be described using all those words. You can’t do it, can you? And that’s why Grover’s great.

And then there’s one more album in the box set… 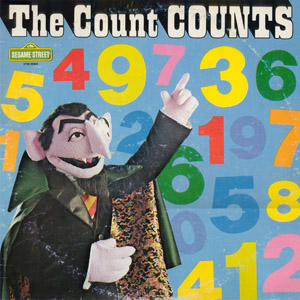 I don’t know if you realized this, but Sesame Street was doing concept albums way before they were cool, such as The Count Counts. Originally released in 1975, this one finds the Count hosting a countdown show on Radio 1-2-3, “from the Sesame Street Studios, high above Hooper’s Candy Store.” Who knew Sesame Street had a radio station? I wish I knew the number for their requests & dedications line. I really want them to play “Comb Your Face” for my friend’s birthday.

Anyway, the really interesting thing about this record, for Sesame Street fans, is that several of the songs were originally featured in animated segments on the show, but they’re sung here by the Muppet guys. So you have Jerry Nelson singing “Ladybug’s Picnic,” Jim Henson singing “The Snail Song,” and Richard Hunt singing “Martian Beauty.” Marilyn Sokol shows up too. So it’s both a concept album and a case of Sesame Street covering its own songs. Far out, man.

• Big Bird singing “I Just Adore Four” with the Tarnish Brothers. But what is that one lyric? It sounds like Big Bird says, “Even four crashing boars.” Do boars crash?

• “It’s Been a Long, Long Time.” This sounds like a very typical love song, with a woman asking her lover to kiss her once, kiss her twice, kiss her once again, but the Count goes nuts counting all the kisses, the dreams, the “longs,” and so on. It’s a fantastic idea, and it’s just short enough to be funny without overstaying its welcome.

• The Count’s weather report. Although I checked, and he was way off when he said it was 72 degrees outside.

• “The Subtraction Blues” by Sesame Street’s own David. A soulful, tragic tale of losing pieces of pizza, including one that “slipped into the goldfish bowl.” Note to self: Stop eating pizza directly over the goldfish bowl.

• “Numerical Correspondence.” A delightful light opera number in which Richard Hunt sounds like Placido Flamingo, so I decided to imagine Placido singing it even though he wasn’t invented yet. Also, this song makes me wonder exactly what the format of Radio 1-2-3 is supposed to be. They play blues, pop, country, Transylvanian music… and now opera? Who’s their audience?

The number one song on the count’s hit music countdown is (SPOILER ALERT!) “The Song of the Count” by the Count. Heyyy, wait a minute! The top song on the radio station just happens to be by the DJ? There must be a conflict of interest there, right? Eh, it doesn’t matter… This song is fun and a great showcase for Jerry Nelson, so I’ll hold off on calling the FCC for now.

Hey, here’s a question: What does “Gluster by Epstein of Forest Hills, NY” mean? It’s in the album credits, but I have no idea what gluster is or why Sesame needed to hire Epstein to provide it. Anyone?

To reiterate: Old School Volume 2 is a fun trip through the smooth Sesame sounds of the 70s, and I really hope they keep releasing these things. But maybe next time around they should try spelling Caroll Spinney’s name right in the credits. It’s been spelled wrong on both volumes. Whoops.

Click here to call Roosevelt Franklin by his first name first and his second name second on the Tough Pigs forum!