Not every Muppet character has staying power.  A lot of Muppets have been forgotten, for various reasons, since the Muppet Show family of characters first got things started in 1976.  But every once in a while, one of those doomed Muppets manages to score at least one memorable appearance before getting stuffed in a box forever, and in an amazing coincidence, both of the episodes I’m looking at today include examples of this.  Who could I possibly be talking about?  Read on! 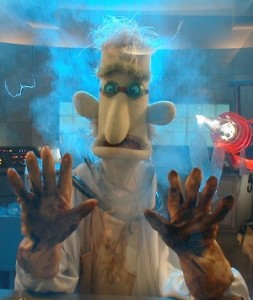 And so, after months of wondering whether we’d ever seen any more Muppets Tonight episodes, we finally got to see the second season.  Assuming we had the Disney Channel.

Are there any Muppet fans who would claim that they actively like Dr. Phil van Neuter, the host of the “Tales from the Vet” sketches?  Muppets Tonight’s crazed “friendly veterinarian” had a regular TV gig a few years before the other Dr. Phil, but his career was much shorter.

His design is pretty cool.  I mean, he looks completely insane, but if you need a mad scientist Muppet to host a twisted, animal-themed take on Tales from the Crypt, you’re going to want him to look insane.  I don’t have any official statistics, but I’m fairly certain Dr. van Neuter is in the 99th percentile for Muppet noses, and his ears are right there, keeping pace.  Some have suggested a resemblance to Andy Dick, which makes me wonder if the folks in the Muppet workshop were watching NewsRadio while they built him.  And to match the crazy-looking puppet, Brian Henson gave him an appropriately high-strung personality.

But I’ve never once seen Phil mentioned in fan discussions of the best aspects of Muppets Tonight.  I could only find a handful of mentions of him on this very website, and one of those was in the first installment of this My Weeks series.  He managed to make it into a movie, and competed against the Dixie Chicks on Family Feud.  He even got his own action figure, which seems really bizarre now that I think about it.  (It’s one of the few Palisades figures I don’t have.  Do you?)  But since the early 2000s, he’s evaporated from the Muppet troupe, just like his fellow Tonight Muppets Bill the Bubble Guy and Mr. Poodlepants. 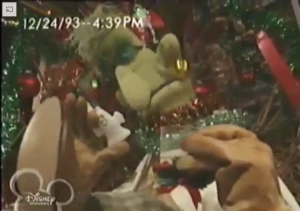 And yet, we’ll always have the Christmas party sketch from this episode.  The premise of “Tales from the Vet” would appear to hold a lot of potential for a recurring sketch: In each appearance, Dr. Phil van Neuter gets annoyed by his monstrous, growling assistant Mulch, and then they present a morbidly funny story about an animal.  But the writers got tired of the actual “Tales” part of that format in no time.  Out of six appearances of the sketch, only two stick to the original premise, and this is one of the ones that doesn’t.

Phil introduces “Stephen King’s Townhouse of Wax,” and instructs Mulch to run the film while he steps away.  Instead, Mulch plays a tape of the 1993 “Tales from the Vet” Christmas party, a recording that chronicles Phil’s gradual breakdown as he gets increasingly drunk on eggnog.

I know it doesn’t sound like awesome comedy from the description of it, and I know for a fact that not everyone will agree with me here, but it always makes me laugh.  The camcorder visuals add to a loose, genuinely spontaneous feel… Again, I know these things are tightly scripted, but it really feels like they just let the camera run while Brian Henson messed around.

Phil confesses his childhood insecurities to an ornament he addresses as “Ghosty,” he boasts loudly about the superiority of his platinum credit card, and he gets lost in his “eggy-noggy, eggy-noggy.”  It’s a little darker than we usually see the Muppets go (at least in 1997 it was), and while I wouldn’t want to see Kermit or Fozzie in a scene perched so precariously on the line between funny and painful, I don’t mind laughing at the expense of this freaky new character. 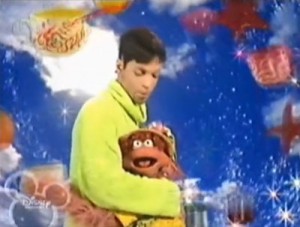 As for the guest star, Prince — sorry, I mean

— is not exactly a guy famous for his goofin’ around skills.  He takes himself seriously as an artist.  But this is a Muppet show, so the singer gets to do comedy, and

fits seamlessly into the Muppet world.  He interacts with his puppet hosts more convincingly than some guest stars known for acting, and he even effectively plays a silly hillbilly character in the “Hoo Haw” sketch.

There’s also the “Starfish and Coffee” number, another triumph of Muppets Tonight’s forays into staging songs as slick music videos.  I don’t know how they decided to feature that particular song, but I’m glad they did.  It’s whimsical enough that I would have believed you if you had told me in 1997 that it was written especially for the show.  How many Muppet fans saw this and ran out to buy the CD it’s featured on?  At least five, I bet. 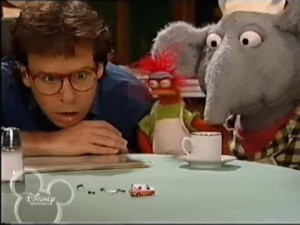 Rick Moranis was one of the stars of SCTV, and he’s great at playing the kinds of eccentric characters that thrive in sketch comedy.  But other than one underwhelming sketch I’ll get to later, he’s just regular guy Rick Moranis in this episode, often sharing the screen with Seymour and Pepe.

There’s a lot of Seymour and Pepe in this one.  After the first season, the duo ceased working as elevator operators, for reasons they never articulate, although I know it’s a job that has its ups and downs.  In season two, they’re working in the studio commissary.  That’s right, there’s a full-service dining area in the KMUP studio, which means the Muppets must still be running an entire TV network, like they talked about in the first episode.  And yet, they never talk about any of the other shows.

Seymour is another long-lost character, having vanished from the Muppet lineup even faster than Dr. Phil.  I was pretty surprised when Muppets From Space came out and Pepe’s pachyderm partner was not present, but I can see why they did it.  The best new Muppets from the show, and even some of the not-so-best, have easily defined characteristics.  You can tell what their thing is.  Johnny Fiama’s thing is that he’s an old-fashioned, somewhat egotistical crooner.  Sal’s thing is that he’s Johnny’s fiercely loyal sidekick.  Andy and Randy’s thing is that they’re incredibly, unbelievably, unfathomably stupid.  Bill even tells us what his thing is: bubbles come out of his head.  And so on. 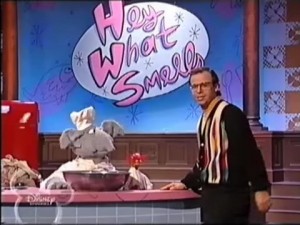 Pepe’s character wasn’t 100% there by the time Muppets Tonight ended, but you still get the sense that he’s a sassy, scrappy little guy.  And that he says “okey” a lot.  That part was there early on, okey.  But what’s Seymour’s thing?  He’s an elephant… and he works with Pepe… and… that’s about it.  The biggest loss to come from his retirement is that we stopped getting variations on the “I’m Seymour/I’m Pepe” theme song.

Fortunately for Seymour, he got to be featured prominently in one of the better storylines on Muppets Tonight.

There are three things happening simultaneously throughout this episode: 1. Seymour and Pepe aspire to be TV stars, which leads to them hosting a cooking show called “Hey, What Smells.”  2. Rick Moranis is preparing a Salute to Late ‘50s Crooners, Obscure British Bands, and Bill Withers.  Because this is a Muppet show, so the comedian gets to sing.  3. Bunsen and Beaker, inspired by the Moranis’s movie Honey, I Shrunk the Kids, attempt to perfect their malfunctioning shrinking machine. 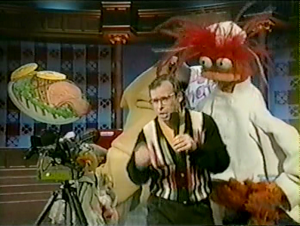 There are funny developments in all three stories, but they when they all collide, they make for a chaotic finale that’s worthy of a successor to The Muppet Show.  Seymour and Pepe’s battle against an enormous dough monster is made funnier by the fact that so much of it happens in the background while Rick Moranis is earnestly singing his medley in the foreground.  And something about seeing Pepe grow to giant size cracks me up.  Maybe it’s just seeing those beady little prawn eyes take up so much space onstage.

Wherever Seymour is now — maybe he owns his own restaurant, where he also works the elevator — I hope he looks back fondly on this episode, and that magical time he made Muppet fans laugh by trying to shoot a mutant bread-monster in the face.

Click here to be unpronounceable on the Tough Pigs forum! 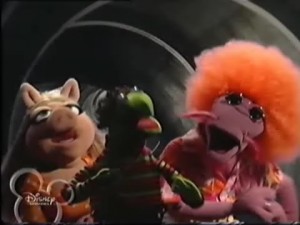