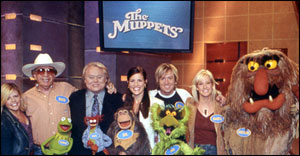 I am SUCH a Muppet fan.

My devotion to the Muppets is so deep that I’m actually going to spend the next week of my life watching Family Feud. I never thought it would come to this.

First, let’s get this out of the way — Louie Anderson. I just don’t get him. How is this man employed and put on public display? He’s not pleasant to look at. He’s not pleasant to listen to. He’s not charming or winning in any way. He doesn’t even do small talk that well — the best he can manage is, “So, Pepe. What ARE you?” He whines and spits and frightens the horses. The best thing I can say about him is that so far I haven’t seen him fall off the stage. Even by game show host standards, he’s just utterly repellent. It’s baffling.

Anyway, there are these Dixie Chicks. And they’ve brought along a couple of their Friends. I’m assuming that the girls are Dixie Chicks and the guys are Friends, although that isn’t made particularly clear. And then there are Muppets, and there isn’t a lot of explanation for them either.

But Louie has no time for nonsense. The fact that half the people on stage with him aren’t human gives him not a moment’s pause. He just barrels right into the game. “Look, there’s Dixie Chicks! And over there are Muppets! Let’s play FEUD!” He keeps referring to it as FEUD, as if he’s so insistent on playing the game that he doesn’t even have enough time to say the whole name of the show. Hey, Kermit! Hey, Emily! C’mon up and get your hands on the damn buzzers!

Kermit gets approximately six seconds of airtime before the Dixie Chicks take control of the game. Then he goes back to his little area and the Muppets aren’t mentioned again for about three minutes. No mention is made of the fact that Kermit is a frog, and that having a frog as a game show contestant is a little unusual. We don’t have TIME for that! We have to play FEUD!

And Feud they do. The first question is: “If Mr. Potato Head was served in a restaurant, how might he be served?” — which I personally found a little insensitive, given that some of the contestants are also fictional characters who could conceivably be served in restaurants.

Anyway, Dixie Chicks and Friends. Emily is a cross-eyed Sela Ward type. Keith is a blond surfer boy who is described as “a wonderful artist” in some unspecified medium, and he seems to be the only human on the show today who finds the Muppets even remotely funny. There’s also Buck Owens, who has apparently written forty Top Ten hits in his life, none of which are worth mentioning on the air. Louie approaches a Dixie Chick: “Not a lot of people know this… this is actually NEWS.” The Dixie Chick has recently eloped. An actual moment of real human drama on the show! They don’t discuss the matter any further. She thinks Mr. Potato Head could be Boiled.

When Pepe comes up to play, he announces that he will strike the button with his chin. Keith cracks up — and, in a gesture of good sportsmanship, he also puts his chin on the button. Louie graciously allows a moment of levity. Then it’s time to play FEUD! The Muppets get to play, and Kermit announces that they’re playing to raise money for “Save the Children.” Which children? What are we saving them from? There’s no time for such questions. We have more important things to think about, like which sport people who are afraid of heights should stay away from.

Also on the Muppets team: Dr. Phil van Neuter flutters around the whole time, acting jumpy. Both of his hands move, so apparently they flew in an extra puppeteer just to operate Dr. Phil’s hands. I find that admirable. Sweetums is also on the team. Sweetums looks great, but he doesn’t get much chance to shine in this episode. There’s also Mo the Frackle, who has a funny Brooklyn accent. (Mo is performed by Bruce Lanoil and sounds like Stevenson the Parrot from the Muppet Treasure Island CD-Rom game, if you recall that game, and you almost certainly don’t.) Mo tries to act up a little. “How ya doin’, Louie?” he snaps. “You seem to enjoy your work.” Louie doesn’t pause to chat. Louie wants to know what cats eat on their pizza.

Louie is desperately shrieking us into a commercial break. “Triple the points when we come back! FEUD!” he cries, as if his life has any meaning. The Dixie Chicks win and raise $20,000 for a children’s hospital, which is nice. Then they all run over and hug the Muppets. The credits roll and about fifteen seconds later the show is over.

So, did I miss something? Is this the game show version of Speed, where we have to get through a round of Family Feud or the bus blows up? They’re acting like they suddenly have to pack Family Feud into a half-hour, when it used to be an all-day event. If you’ve got Muppets on your stage, why not take a little time to interact with them, and let them be funny? What’s so all-fired important about playing this damn game? Couldn’t we just give the children their money, give the cats their pizza, and then take a second to breathe?

I guess what I’m afraid of is that watching this show seems to actually make time go faster. I’m concerned that by the end of the week, it’ll start going so fast that we’ll go backwards, and it’ll be Monday again.

My Week with Family Feud Part 3