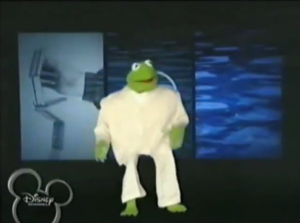 I’ve seen all these episodes multiple times before, but I had completely forgotten the backstage storyline of this episode: Clifford and Rizzo are increasingly anxious as the end of the show draws near, because Miss Piggy is on a flight back from the South Pole and might not make it in time for her closing number with Whoopi Goldberg.

But who cares about any of that?  The highlight of this episode is Kermit’s performance of Talking Heads’ “Once in a Lifetime,” and it’s one of those moments where you can see a lightbulb illuminate over the producers’ heads as they figure out what the show can be.  Until now, all the musical numbers on Muppets Tonight have been presented as onstage performances — even the fairly elaborate “Feelin’ Alright” number in the John Goodman episode (and “Opposites Attract” in the Paula Abdul episode, which was produced early on but not aired until the second season) were shot from the perspective of watching a live performance on the stage of the Muppet studio.  But “Once in a Lifetime” is the first one to be shot and edited like a music video.  In fact, it wouldn’t have been out of place on MTV at the time.  BACK WHEN THEY STILL SHOWED MUSIC VIDEOS, AM I RIGHT? 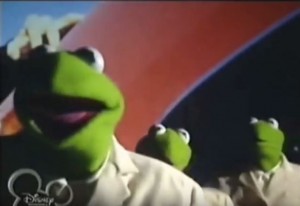 There are quick cuts and dissolves between different angles, while Kermit pops up in different places around the set, and the set is not even a strictly defined physical space like John Goodman’s hospital room in “Feelin’ Alright.”  It’s a black abyss where large video images loom in the background, and the band is glimpsed only fleetingly in the shadows.  And just to make things weirder, there are three Kermits, and one of them does some shaky dance moves, and they’re all wearing oversized David Byrne-style suits.  (The explanation that the big suit belongs to Giganticus, the world’s largest performer, who is indisposed because he got beaten up by Super-Giganticus, is completely unnecessary, but the absurdity of it pleases me.)

This video feels like it would have been right at home on The Jim Henson Hour, with only the addition of a few awesomely cheesy ‘80s video effects.  It also feels like a precursor to the music videos that have brought the Muppets so much attention in the YouTube age, like “Bohemian Rhapsody” and “Kodachrome.”  Muppets Tonight will experiment a bit more with the music-video-not-limited-to-the-stage form in later episodes, so stay tuned.  And watch out for Super-Giganticus. 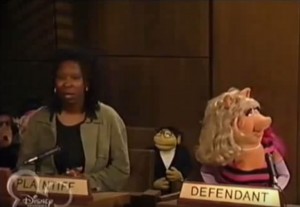 Elsewhere, the show continues the gag of showing clips of guest stars working with the Muppets before they were famous with a People’s Court sketch that finds aspiring actress “Goldie Whoopberg” suing hairdresser Miss Piggy for giving her too many braids.  It’s worth a smile seeing the real Judge Wapner blasting an air horn.  But man, the dramatic irony schtick is wearing thin.

Maybe you could be in a movie, Wapner tells Whoopi!  Maybe I could play a psychic who talks to the ghost of young Pat Swayze, Whoopi says!  Maybe you could win an Oscar, Piggy says!  It’s pretty much the exact same joke they did in the Cindy Crawford “Kermit the Frog Club” sketch.  I would have been really impressed, though, if they had continued the joke by speculating that Whoopi could later voice a goat in a movie about a racing zebra and an octopus in a Toy Story sequel, and eventually co-host a talk show with young Barb Walters and Mary Viera. 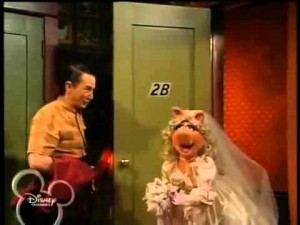 Martin Short is certainly the kind of performer you’d expect to work with the Muppets.  If the writers began every episode by asking, “What can we do with this guest star?”, this must have been an easy one.  The answer was, “We can have him play some of his eccentric characters, and make funny faces, and do some dancing that’s entertaining because it’s not actually very good.”

Short is a guest star capable of matching the Muppets when it comes to zaniness. (Note: I say this as a person who is a big enough Martin Short fan that an Ed Grimley doll is watching over me as I write this.) That also means he’s a great fit for a backstage “plot” in which he gets forcibly compressed by a wild ride in Seymour & Pepe’s elevator, then experiences remarkably fast weight gain after devouring Johnny’s ma’s delicious sauce.  Of which she has apparently made an unlimited amount, because folks eat a lot of sauce in this episode. 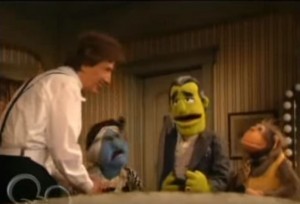 This was the second episode in production order, and as such it represents the scripted introduction of Johnny Fiama and Sal.  I remember reading a newspaper article way back when Muppets Tonight was first announced that quoted Brian Henson as saying that new characters were being “workshopped.”  I can only assume the workshopping process is how Johnny, the smooth, Sinatra-like crooner, ended up with a monkey sidekick.  Sal is especially loud and abrasive in this episode, but the producers managed to balance him out by the later-produced and previously-discussed Tony Bennett episode.

Elsewhere, the sketch highlights include another “Eagle’s Nest” with one of my favorite jokes of the series.  Sam presents the first topic: “The peace accord signed this week in Geneva.  Will the peace accord hold, Andy Pig?”  And then Randy ties up his brother to see “if the piece of cord will hold Andy Pig.”  Actually, now that I’ve typed that, I realize that spelling it out kind of ruins the joke.  But I’m still laughing!  Ha ha ha.  See?  And once again, Andy and Randy prove to be more than tolerable in small doses.  And it’s delightful that they’ve picked up Clifford’s “Yo yo yo!” 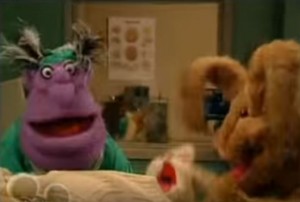 Then there’s “E-I-E-I-O-R.”  It’s kind of dumb that Fozzie punctuates all his jokes by honking a horn, but I admire this sketch for delivering “Veterinarian’s Hospital”-style jokes without being presented as “Vet’s Hospital Revisited,” in the manner of the ill-advised “Pigs in Space Deep Dish Nine: The Blah Blah Blah of Pigs in Blah.”  And even though the name spoofs ER and it has a shaky camera, it doesn’t really bother with being an ER parody. My favorite gag is the purple doctor delivering bunny babies and throwing them around the room.  Have we ever seen that puppet again?  I love the design on that guy.

Click here to try the sauce on the Tough Pigs forum!  Because when Johnny says, “When Ma says you eat, you eat, you hear,” YOU EAT, YOU HEAR? 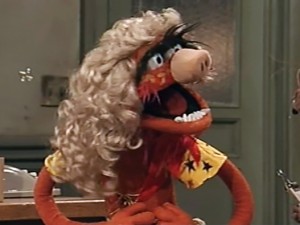