Remember when the Muppets made their much-ballyhooed return to network television with a primetime show on ABC?  No, my delightfully naïve friend, I’m not talking about The Muppets!  I’m talking about Muppets Tonight, which premiered on this date, March 8th (a Friday, that year) back in 1996.  To commemorate the show’s 20th anniversary, Tough Pigs’ own Matthew Soberman and I will be taking a look at each episode of this series and saying incredibly insightful things about them.  It’s My Weeks with Muppets Tonight!  (Note: For those of you wondering — and I know you’re out there — we will be going in broadcast order rather than production order.  Synchronize your watches accordingly.)

It’s the first episode of a new Muppet TV show!  Any TV show’s first episode has its work ahead of it, establishing the characters and setting and letting the audience know what to expect.  It’s like, “Here’s some bread, and here are some toppings, and here’s the kind of sandwich we’re going to make every week.”  But things were trickier for Muppets Tonight.  The audience already had preconceived notions about the toppings, and the bread might not have been exactly what they were expecting.  Plus, a few of the condiments were missing because the sandwich-makers ran out and they weren’t sure when they would be back in stock, and even though they had pickles, they couldn’t guarantee the pickles would be available for every sandwich.

So the creators of Muppets Tonight set out to make us the best sandwich they could with the materials they had available, and in this episode we’re taking our first bite, and they hope we like it.  (Perhaps you’ll want to take a break from reading this right now to take a trip to Subway.  Go ahead.)

The very first scene is super-promising: So many Muppets!  The Swedish Chef is there, and Floyd and Janice and Crazy Harry!  And Kermit’s leading them all in a meeting about their TV station!  And then Gonzo is talking!  It certainly smells like the sandwich we know and love.  But before two minutes have passed, Kermit declares that they need a host for their new variety show, and all the beloved Muppets run out of the room, whereupon Kermit places the show in the purple hands of Clifford.  In retrospect, it’s a sign of things to come: Don’t count on your old Muppet pals being around… but count of plenty of Clifford!

What?  Who’s Clifford?  I recall shaking my Muppet geek head at entertainment news reporters back in 1996 who referred to Clifford as a “new” Muppet.  He wasn’t new, he was a firmly established character!  From The Jim Henson Hour!  And The Muppets at Walt Disney World!  And… um… that one sing-along video.  But in reality, I imagine more than a few viewers had cartoon question marks over their heads when they realized that some guy not named Kermit would be the host of what they expected to be The Muppet Show Again.  And a lot of them were so confused by this strange, alternate Muppet reality that they switched over to Fox and watched Sliders instead. 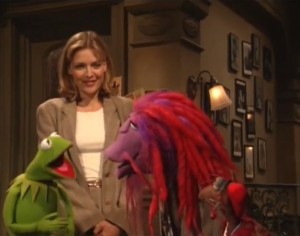 Then there’s the second most high-profile Muppet, Miss Piggy.  She’s here, but her role in this episode only emphasizes her irregular status in this era of the franchise.  After a disastrous first act by some dancing cheeses, the gang quickly realizes they’ll need a guest star to make the show work, and Clifford and Rizzo turn to Piggy.  But wait, why is she a guest star?  Isn’t she a part of the ensemble, albeit a very prominent part?  Not anymore. Miss Piggy is a sometime Muppet, just as Frank Oz is a sometime puppeteer.

Unbeknownst to Clifford and Rizzo, Kermit nabs Michelle Pfeiffer as a guest, and if you’re looking for a genuine celebrity in 1996, you could do a lot worse than the star of the hit Coolio music video “Gangsta’s Paradise.”  She’s a much more exciting get than The Jim Henson Hour‘s Louie Anderson, anyway — sorry, Louie!  Also, I just realized that Michelle Pfeiffer and Miss Piggy have the same initials and it’s blowing my mind. 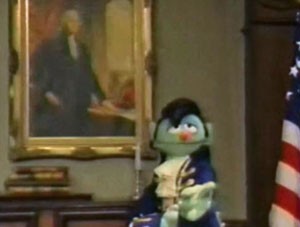 So far we’ve learned about various ways that Muppets Tonight will be new and different, and there are still a few more. There are the first new regulars, Andy and Randy Pig, who are apparently the result of the writers challenging themselves to create the stupidest fictional characters ever.  And there are new recurring sketches in “Bay of Pigs Watch” and “Great Moments in Elvis History,” the latter of which is a major highlight for me.  Featuring the three Elvises from the previous year’s Muppet Classic Theater, it’s a silly but tightly-written sketch imagining three Elvis Presleys as the Founding Fathers.  It’s quick enough not to overstay its welcome, almost every line is a joke, and it ends with Elvis and Elvis and Elvis using Ben Franklin’s newfound knowledge of electricity as a cue to play a rockin’ song on their electric guitars.  It feels like it could have come from any Jerry Juhl-era Muppet episode or special.

The episode ends with Piggy and Pfeiffer as dueling Maria von Trapps, which is fun enough.  For some reason, Lew Zealand is one of the children they sing to, but he doesn’t have any lines and he doesn’t do anything very Lew Zealand-y, so that’s a little bit frustrating.  Which may very well be the theme of all these reviews: Muppets Tonight as a show that’s fun enough, even if it’s a little bit frustrating.  Still, I’ve definitely had worse sandwiches.

Here’s a great example of how an especially game and talented guest star can make for a great show.  In 1996, Garth Brooks was the hugest country music star, but I don’t think he’d done much in the way of acting or comedy, so it was even more remarkable to see how decisively he nailed it here.

Intentionally or not, Muppets Tonight‘s storylines occasionally bore some resemblance to stories from The Muppet Show, and Garth Brooks’s refusal to do what he’s famous for is not unlike Christopher Reeve and Lynda Carter declining to put on their super-suits on the old series.  But Garth Brooks takes things a step further.  Not only does he refuse to sing his hit songs with Longhorn cheddar cheeses and the cactus barbershop quartet, he refuses to do anything the Muppets have written for him.

Instead of singing “Surrey with a Fringe on Top” with Miss Piggy, he ropes her into doing the balcony scene from Romeo and Juliet.  When Kermit convinces him to sing a song, he chooses “It’s Not Unusual” in a full-blown Tom Jones impression.  Even when he promises to deliver a country song, it turns out to be “If I Were a Rich Man,” with Brooks playing Tevye from Fiddler on the Roof out in the (Russian) countryside.  Brooks is genuinely funny in all of these, and he’s obviously having the time of his life.  Just think, if the ratings had been better for this episode, he might have been inspired to pursue a career in comedy, and he never would have taken on that ill-advised “Chris Gaines” project. 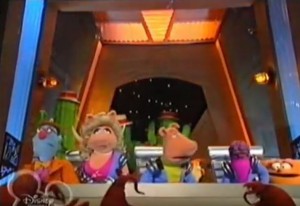 In fact, this might be my imagination, but it feels like Brooks even has more screen time than most guest stars.  Which is just as well, because the sketches in this episode are not among the show’s best.  There’s the debut of “Tales from the Vet” that takes forever to get to the gag (The Turkey Who Loved Thanksgiving, preceded by what feels like ten minutes of Dr. Phil van Neuter berating Mulch as they fail to find the case file), and a “Pigs in Space Deep Dish Nine: The Next Generation of Pigs in Space” that barely introduces the new Swinetrek crew before interrupting the sketch with the aforementioned cheeses and cacti.  Oh, and Bill.  Bubbles come out of his head.  I know this episode was actually filmed later in the production season, but man, it’s weird that the first “Deep Dish Nine” sketch breaks a pattern that hasn’t even been set.

Fortunately, Garth Brooks ends things on a high note by agreeing to do his song “We Shall Be Free,” surrounded by the whole Muppet cast.  And we even get to hear Rowlf say “Oh yeah” and “Heh heh,” his first spoken lines in six years.  I think we all rewound our VHS tapes a few dozen times to play that moment back. 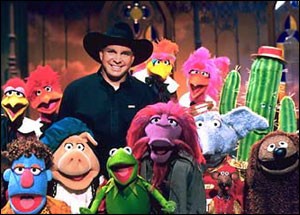 Now we’re two shows in, and Muppets Tonight is off to a good start.  It’s not The Muppet Show, but it’s funny, the guest stars are high-caliber, and it’s packed to the gills with Muppets.

Click here to throw your underwear at Garth Brooks on the Tough Pigs forum!