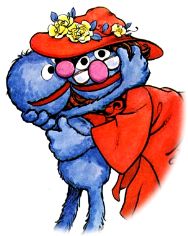 It feels like a lifetime. It’s hard to believe that it’s only been three months since GroversMom.com, the article in which Scott Hanson and I alerted the world to the mysterious variations in the depiction of Grover’s Mom in Sesame Street books. That preliminary survey inspired us to establish the GroversMomological Research Foundation, a think tank dedicated to solving the puzzle of Grover’s Mom.

It was immediately obvious to us that there was still a lot of work to be done in the field of GroversMomology. Over the long months, we’ve developed three theories to explain why there seem to be so many different Grover’s Moms.

The first is the Multiple Moms Theory, which holds that Grover is being raised by a series of Moms, either sequentially or simultaneously. There’s a surprising amount of evidence to back up this theory. The clinching evidence, of course, would be spotting two different Moms at the same time. We haven’t found evidence of a dual-Mom encounter yet, but we’ve come close, as you’ll see by the end of the week. 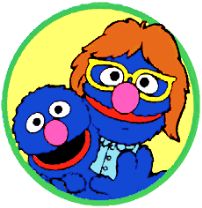 There’s also the Grover’s Mom Uncertainty Principle, which suggests that the very act of observing Grover’s Mom changes how she looks. This theory requires a background in quantum physics to explain, so we won’t go into detail on that.

The third theory — which we’ll take a crack at here — is the Lone Mom Theory, otherwise known as the Grand Unified Theory of Moms. This theory holds that, despite surface appearances, Grover has only one Mom, and the changes we see in her appearance and lifestyle are all part of her complicated personal evolution.

This week, we hope to piece together a life history of this remarkable woman, and shed some light on the complex pheMomenon that is Grover’s Mom.

[ Note : The acronyms mentioned in parentheses (WWW, etc) are footnotes to the books being cited; the complete list of references is on the Bibliography page. ] 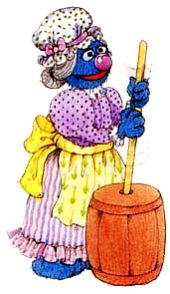 The historical record on Grover’s Mom is sometimes confusing and apparently contradictory, but the one solid fact we have to work with is that she grew up on a farm.

At least some of Grover’s family have lived on a farm for generations. Grover’s great-grandmother, his oldest known relative, “used to make butter in a wooden churn.” (WWW)

You can see in the picture that Grover’s great-grandmother didn’t wear shoes, which must mean that the family hit some hard times. Farming without footwear could be dangerous at worst, sticky at best. I have to assume that they didn’t have shoes because they couldn’t afford them. 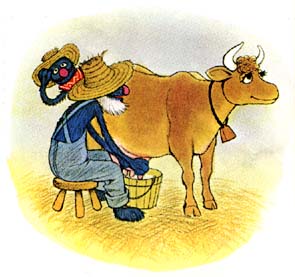 To this day, one of Grover’s (barefoot) uncles still lives on the family farm. Grover’s mother must have moved off the farm before Grover was born, because Grover himself has no experience with farm living. When he’s invited to take care of the family farm for the weekend, he declares bravely, “I am sure that being a farmer is easy,” but he quickly learns otherwise. He spends a whole day making mistakes — feeding pizza to the animals, cleaning the pig pen with a mop, and driving the tractor into the chicken coop — and he has to be rescued by his Sesame friends (DFG).

Grover’s uncle lives alone when he asks Grover to babysit the farm, but he later has children of his own. In another book, Grover mentions his farm cousins: “Grover told them about the library on wheels that he used when he visited his cousins in the country. ‘They live too far away from a library, so the library comes to them. It is called a bookmobile.'” (VSL) 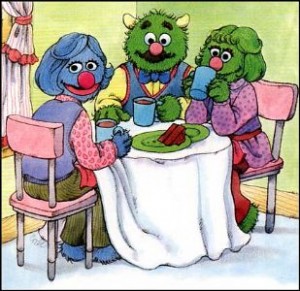 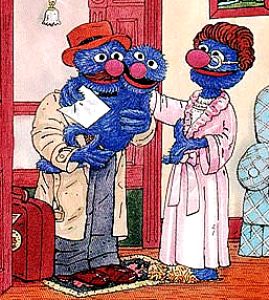 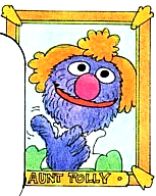 Besides the unnamed farmer uncle, Grover’s Mom may have as many as three other siblings. Other relatives in her generation include Uncle Ralph and Aunt Betsy (GTB), Uncle Georgie (WIS), and Aunt Polly (GRP). Grover’s Mom is not the only sibling to have left the farm; Grover also has a cousin Fred who lives in Florida (MCE).

Uncle Ralph and Aunt Betsy, by the way, are the only known members of Grover’s family who aren’t blue. Imagine what a surprise it must have been for Grover’s grandfather when his green child was born. It probably caused quite a stir in town.

Even after leaving the farm, Grover’s Mom still maintains a strong interest in plants. In Grover’s Mommy, we learn that “Grover’s Mommy is a marvelous farmer,” accompanied by a picture of Grover and Mom planting tomatos, lettuce and roses in their backyard garden (G’sM). Grover’s Mom can often be seen in the garden (MC), or gratefully receiving gifts of flowers (SSD, WWW). 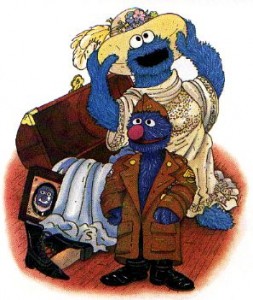 We get another clue to Grover’s Mom’s background when Grover and Cookie Monster play dress-up in When Is Saturday, in which “Grover’s mother let them play with some old clothes.” (WIS)

The clothes in the trunk must have belonged to someone close to her; there’s no other reason why she would store an enormous trunk of old clothes in what is apparently a four-room apartment. A plausible assumption is that her father was a soldier in World War II, and her mother was enormously overdressed.

Having a grandfather in WWII does fit Grover’s timeline. Working backwards: Grover first appeared on Sesame Street in 1969, and he’s “written to represent the psychological age of a four-year-old” (SSU). Let’s say that puts his birthdate in 1965.

If Grover’s Mom was a literal baby-boomer, with her soldier father coming home in 1945 to start a family, that means she gave birth to Grover when she was 20 years old.

There’s one last clue to Grover’s Mom’s upbringing in the Sesame Street Magazine story Don’t Worry, Grover. Grover is worried about his first day of school, so Mom tells him about her first day: 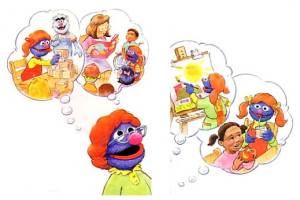 “Grover’s mommy told Grover about how she played with blocks, painted beautiful paintings, learned to count, and to make music on the xylophone. She even told him about the little milk cartons she had each day at snacktime and how she and her best friend sat together during lunch.” (DWG)

The thing that’s interesting about that is what an amazingly progressive school Grover’s Mom must have gone to in the early 50’s, when she started first grade. According to the illustration, the student body was white, black, green and two shades of blue, and her best friend was African-American. There’s also a student in a wheelchair in one of the thought bubbles; the school apparently operated on the principle of mainstreaming disabled students decades before the Americans with Disabilities Act.

These glimpses of a cheerfully integrated, inclusive school would seem progressive even today. For a 1951 farm community, it’s miraculous. Maybe they were Quakers.

My Week with Play With Me Sesame – Tuesday

My Week with Play With Me Sesame – Wednesday

My Week with Play With Me Sesame – Thursday