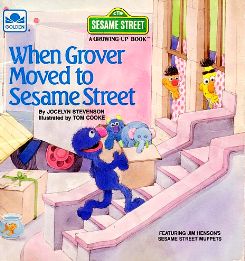 At this point, we get to the watershed moment in the history of Grover’s Mom — the turning point of her life. It’s documented in the book When Grover Moved to Sesame Street (WGS), a 1985 flashback of epic proportions.

Until this very moment, you may have assumed — without even thinking about it one way or the other — that Grover was a Sesame native, born and raised on the Street.

But it’s not so. Here’s how the story starts: 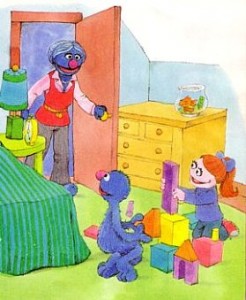 Grover Monster did not always live on Sesame Street. A long time ago he lived in a different neighborhood, and his best friend Minnie lived next door.

One day when Grover and Minnie were playing in Grover’s room, Grover’s mommy walked in.

“Yes,” she said, “but it means that we must move to a new place — a place called Sesame Street.”

Now, for readers who grew up in the 70’s — how many of us had just that same moment? 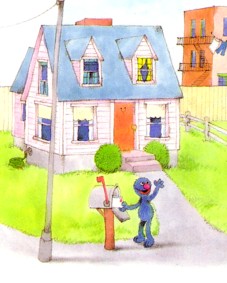 You’re playing innocently in your room, everything’s fine, and all of a sudden your Mom walks in — with a new hairstyle, groovy new threads and a belt made out of a piece of rope — and she tells you that she has a “new job.” And that “new job” means you have to move out of your suburban house and into an apartment in a run-down section of the city. We’ve pretty much all been there, haven’t we?

I mean, a “new job.” Honestly. Grover may think that’s terrific, but I have no confidence in this “new job.” A new job that you move for means more money, right? It doesn’t mean that you move out of your house in the suburbs with a big lawn and go to a brownstone walk-up in a run-down city neighborhood. That doesn’t sound like a “new job” to me. 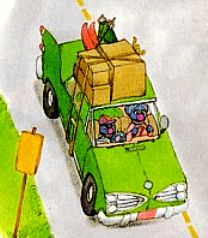 What that sounds like to me is: Your dad is gone, we can’t afford to live in this house anymore, I’m a single woman and I want to live in the city, so here we go.

Because Dad, in this book, is not just off-screen, as he could be in some of the Perm Mom stories. He’s not at work, he’s not in the other room. Dad is not in the picture.

Grover and Mom pack up the house, put everything in a moving van, and they drive their car — just the two of them — to their new apartment. Nobody mentions Dad, there’s no family picture that includes Dad. It’s Mom and Grover, moving house. 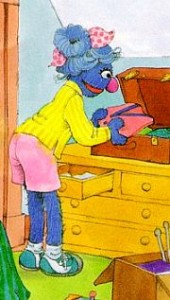 Now, there’s obviously a couple possibilities for what could have happened to Dad at this point, which are basically Divorce or Death. There’s no direct evidence either way in the book, but I’d lean more towards Divorce, just because Mom seems really happy about the whole thing.

There’s eleven pictures of Mom in the book, and in every single one, she’s smiling — not just a bland, pleasant expression like Perm Mom often had, but an actual open-mouthed grin.

She’s happy about this move. This is what she wanted. She seems relaxed and confident. She seems free.

And by the way, I don’t mean to be crude about this, but check out her can. Not in a disrespectful way, but take a look. In all of the Perm Years stories — and they number in the many — there wasn’t a single picture that suggested that Grover’s Mom had anything in the way of a back porch. Most of the time Perm Mom was sitting down, often in a rocking chair. 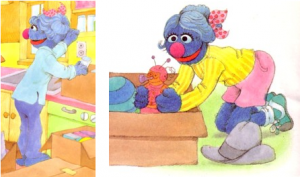 But in this book, there’s three different pictures that show off her butt, on three consecutive pages. Forget the long dresses and granny glasses. The girl is putting it out there. This is not your father’s Grover’s Mom. 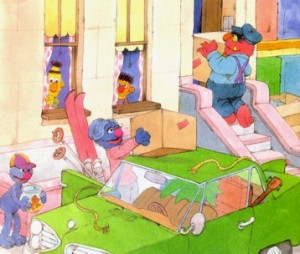 And check out what she’s got packed in the car — skis! A guitar, a potted plant and a big pink pair of skis! Up to this point, Mom’s leisure time activities have consisted of a) knitting and b) nothing else. All of a sudden, she’s learning to play the guitar, and she’s skiing.

It’s out with the old Mom, and in with the new. Mom is moving to the big city, she’s getting a job, and she’s making a new life for herself.

Once they get to Sesame Street, Grover worries that he doesn’t know anybody there, and he won’t have any friends. But within one afternoon, he meets Big Bird, Betty Lou, Cookie Monster and all the rest, and everybody’s nice to him. “I think I am going to like it here on Sesame Street,” Grover says. 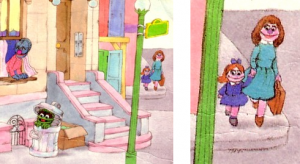 Mom is looking out the window, smiling. Grover is adjusting. Grover will be fine. And who’s that coming around the corner?

It’s Minnie, Grover’s best friend from the suburbs, walking hand in hand with her mother — who’s carrying a briefcase. It’s a new world.