My Week with Grover’s Mom – Tuesday: The Perm Years

The Perm Years — the era when Grover’s Mom had curly brown hair and granny glasses — is the best documented and least understood period of her life.

Perm Mom makes more appearances in the Sesame books than any other variant, but we know almost nothing of her personality and inner life. She remains aloof and guarded, an impregnable mystery. She is the Mona Lisa of Grover’s Moms.

She keeps a fixed, pleasant expression on her face, and almost never changes it. You can never tell what she’s thinking, except that she loves Grover and wants him to drink his milk.

After all, she comes from stoic farm stock. If she didn’t worry the day all the cattle got sick in the middle of a tornado, then she’s not going to bother getting upset now. 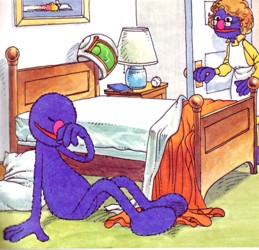 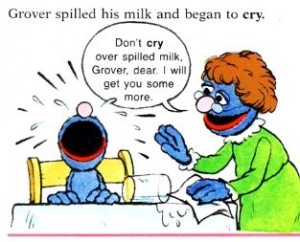 It’s pretty impressive, though, considering how much she has on her plate. Grover is a clumsy, insecure child who needs to be comforted and reassured approximately once per book. He’s scared of the dark (IUA, SSD). He can’t go to sleep without falling out of bed (AGS). He can’t even drink a glass of milk by himself without spilling it (SSD).

But Mom maintains a zenlike calm, even in the most extreme situations — like Grover getting carried away by a helium balloon (SSD). 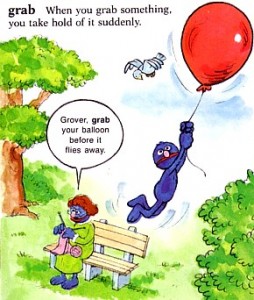 Here’s what we know about her daily life during the Perm Years: 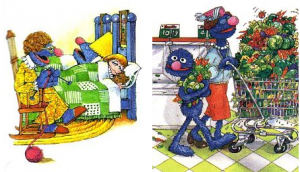 She likes to knit. There’s a tremendous amount of knitting and sewing (SSD, GBS, WIS). 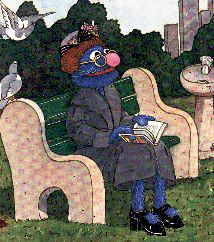 She likes to cook (GGS, LE). She buys a heaping basket full of vegetables and spends an entire weekday making vegetable soup (WIS). (That night, Grover says to himself, “Tuesday was vegetable soup day.”)

She likes to read (WIS), and she often reads bedtime stories to Grover (SSD, GBS).

And that’s about it. Oh, there’s one other thing we know about this period of her life: Dad doesn’t seem to be around much.

In all the books and stories that feature Grover’s Mom, we’ve only found two passages that even mention Grover’s Dad. The most important one is in the poem “I Used to Be Afraid,” in The Sesame Street Library volume 2:

When I was little I used to be scared
Of being alone at night.
I’d pull the blankets up over my head
And pray that the sky would get light…

But then my mommy sat by my bed
And said there was nothing to fear,
‘Cause nothing scary went on in the night
And she and my daddy were near. 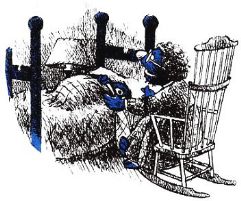 Not that he’s near at the moment. Mom is the one sitting by Grover’s bed in the illustration. Mom is the one who’s home cooking and knitting and taking Grover’s temperature. Dad is off doing who knows what.

And this, I think, is the key to Mom’s supernatural calm: She’s bottling up a resentment that’s about to pop.

Think about it. It’s the late 60’s, she’s in her early 20’s, and she looks like hell. She’s left her impoverished farm family behind, but now she finds herself a housewife with an absent husband and an adorable but hyperactive child. She already looks decades older than she really is, and she doesn’t dress well.

A protective and faithful mother, she doesn’t let Grover see the tension that lies under the surface. She just knits, and cooks, and bides her time.

The lid is about to blow.

Tomorrow: Mary Tyler Mom! Grover’s Mom is gonna make it after all…