My Week with Family Feud Part 5 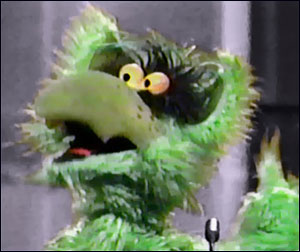 Okay, you wanna talk Thanksgiving? I’ll give ya Thanksgiving. I personally will be giving thanks at the end of this week, when I no longer have to listen to Louie Anderson’s screechy, nasal whine.

“Come aaaahhhhnnnn! Let’s play Feuuuuuuuuud!” I can’t believe Louie Anderson is employed in any capacity. He’s so horrible. Do people actually watch this show of their own free will? It’s enough to make me lie back and long for death.

In order to get through this, I’ve started fantasizing that the host of Family Feud isn’t Louie Anderson — it’s elfin performance art diva Laurie Anderson. Laurie comes out on stage playing the theme song on her electric violin. Behind her, huge screens show repeating film clips of telephone poles and deserted mesas. Laurie welcomes us to the show: “There was this man. And there was this woman. And they were playing…” Plink, plink, plink. “… Family Feud.” She paces around the stage. “It was a long road.” Glance at the telephone poles. “It was a very…” Plink, plink. “… Long road.” And then she plays an eight-minute piano solo on her tie.

I mean, wouldn’t that be great? I’d pay good money to see that. Unfortunately, we’re stuck with Louie instead. Well, as long we’re here. Come on. Let’s play Feud.

The Muppets have a whole new strategy today. I think they’ve decided that there’s no way they’re going to win the game, so they’re just being funny. It’s working. Louie asks Johnny where he’s from, and Johnny says: “I’m from Camden, New Jersey.” That joke is probably lost on a lot of people, but I actually live in Philadelphia, across the river from Camden, New Jersey, and I assure you — that is a very funny place for Johnny to be from. This fills me with joy and I can get through the next couple of minutes of Louie.

The first question is: How would a stupid man try to fix a toupee on his head? Sweetums’ answer: “Avocado!” The other Muppets jeer and hiss at him. Then it’s Kermit’s turn: “I think perhaps he might try — and I don’t mean anything by this, folks, but — to screw it!” Man. Apparently that whole “mammary glands” thing really juiced Kermit up. Johnny buckles under pressure and answers “Cannolis” again. They lose.

Then the lights dim, and Laurie Anderson comes out. She’s wearing a bright white suit, and she’s standing in a dramatic spotlight. The synthesizer swells. Laurie has come to take me away from all this. I go with her, into the light. Laurie brings me to Performance Art Heaven, which is a big empty warehouse in Soho, backlit with rear-projection screens showing black and white film clips. There are no game shows in Performance Art Heaven, and no country music, and everyone has a clever criticism of American culture.

It’s wonderful. I’m at peace here. I don’t ever want to go back.