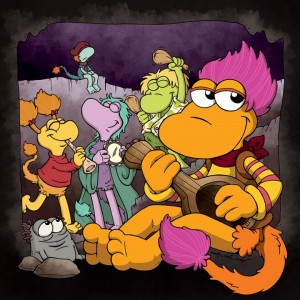 This week, the final issue (for now) of the Fraggle Rock comic book hits the shelves. But before I evaluate the book’s contents (spoiler: it’s pretty good), I want to talk about Fraggle Rock as a franchise for a little while.

Fraggle Rock has always been unique among the Big Three Muppet productions, in many ways. Some of these are obvious in the show itself. It was more focused on character relationships than the curriculum-driven Sesame Street or the comedic free-for-all Muppet Show. It also favored a more leisurely type of storytelling, taking a half-hour to tell a single plotline — no sketches or inserts to be found.

But for me, the most important difference was that Fraggle Rock was designed to end. While Sesame Street has been an ongoing concern for 41 seasons and counting, and the gang from The Muppet Show has lived on through movies, specials, and new TV shows, Fraggle Rock consisted of 96 episodes. That’s it. The characters took one final bow in Muppet Family Christmas (and sort of appeared in a terrible hand-drawn nightmare), and then it was over.

The final episode, entitled “Change of Address,” definitively closed the book on the show. To me, it always seemed very much like the creative team saying “These were our characters. This was our world. Goodbye.” Anyone else would have to be crazy to try to replicate that magic, I always thought. Fraggle Rock was a beautiful, perfect work. To revisit it would only invite comparisons, and the new work would inevitably come up short. 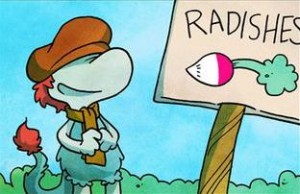 Naturally, then, I was skeptical when the folks at Archaia Comics announced that they were planning to release Fraggle Rock comic books consisting of short stories. But when I purchased the hardcover collection of the first miniseries, I was surprised to find that it was actually a good deal of fun. Wednesday, April 13, saw the release of Fraggle Rock volume 2 #3. Let’s see how it compares to its predecessors.

The bulk of the issue is devoted to “My Gift is My Song,” a 20-page story written and drawn by Katie Cook. Mokey’s birthday party is coming up, and everyone has a gift all picked out except for Boober. Beside himself with panic, he searches over the rock, seeking advice from a number of other characters along the way. I won’t spoil what he ends up giving her, but the title provides a big fat clue.

Cook’s fondness for the show is clear, as everyone seems in character. Boober has the right balance of prickliness and practicality (he inadvertently insults Red at one point, which is absolutely something Boober would do), and everyone he encounters seems “correct” as well. Cook also captures the series’ sense of humor. One gag involving Wembley and a kissing plant made me laugh out loud, and the Trash Heap’s brief scene is also quite amusing. 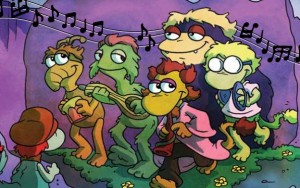 In the first volume, Cook contributed not only the activity pages (we get two more here, including fun instructions to make a radish flower), but also the cute clock-watching-is-no-fun story “Time Flies.” This story is three times as long as that one, and Cook really takes advantage of the extra length. She draws a number of characters that I’ve never seen her attempt before, and they all look terrific. I especially love her Cantus. His design isn’t too far removed from the rest of Cook’s Fraggles, but his hair and goatee keep him from looking too youthful.

She even draws the Inkspots, who are somehow even more adorable than I would have imagined!

The issue’s other two stories are both quite short. First up is “Shopping with Silly Creatures” written by Katie Strickland and drawn by Lindsay Cibos. In a postcard, Uncle Traveling Matt tells Gobo about his experience in a Laundromat, where Silly Creatures feed their old clothes to ferocious beasts and take new ones from nearby magical caves. 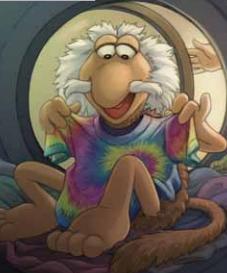 It’s a funny little lark, very similar to the kind of thing Uncle Matt would write about. I can’t say I’m crazy about Cibos’ art. She seems to be going for a photorealistic look, which renders everyone kind of stiff and dead-eyed-looking. Still, it’s only four pages long, and it’s nice to see a funny new Traveling Matt adventure, so I won’t complain too loudly.

Finally Red’s competitive streak comes to the forefront in “Red’s Chomp-a-Thon” written by Paul Morrissey and drawn by Nichol Ashworth. The titular Fraggle organizes an eating contest, but decides she’ll only enlist Fraggles she can beat (conveniently, this means the other four main characters). But all the scheming in the world can’t keep Large Marvin from entering the competition.

Here’s why this story excites me on a gut level. Because I’m a nerd, and Large Marvin isn’t even the most obscure character in it. The World’s Oldest Fraggle shows up to judge the competition, and also to get confused about what kind of contest it is. Morrissey throws in a reference to Wembley’s little-discussed crush on Lou Fraggle. We even get a hint that Cotterpin is starting to bring the concept of “fun” to Doozer society, as she designs a building contest. 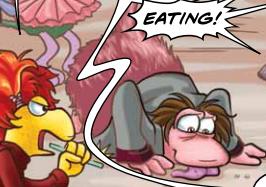 In addition to its funny, Fraggly script, the story also benefits from Ashworth’s terrific art. The characters are pretty close likenesses of the puppet, but they’re loose and cartoony enough that their expressions really sing. When Large Marvin licks the floor of the cave, his look of sheer desperation is one the puppet could never make, which makes the sight gag even funnier.

This issue, like the five before it, is good enough to overcome my initial concerns about the series. For example, it really bothered me at first that they don’t replicate the structure of the show like BOOM’s Muppet Show comics did. But honestly, I don’t even know how that would work on the printed page. The Doc/Sprocket segments would just seem like filler, and they’d have to be drawn in a radically different style. As I mentioned at the top of this review, the show can’t be replicated. So I’m glad that they didn’t even try.

Instead, we have six issues (maybe with more to come) of a whole bunch of different writers and artists telling stories about characters we love. Some of the stories are better than others, of course, but it’s really nice to see the world of Fraggle Rock alive again, in something that captures the show’s spirit.

“Nice” is the best word I can think of to describe it. This series isn’t essential. It isn’t going to make any new Fraggle Rock fans. But if you already own all four seasons of the Fraggle Rock TV show on DVD, go out and buy the comic book if you want. You’ll probably enjoy it.

Click here to give Mokey a birthday present on the Tough Pigs Forum.