My Day with the Animated Fraggle Rock, part 1

Last year, Fraggle Rock fans rejoiced at the fact that we finally got our hands on DVDs of the entire series of the show. What more could any Silly Creature want? And then the unexpected happened: someone found some Betamax tapes of the 1987 Fraggle Rock animated series in some dude’s basement and assumed that someone might actually want to buy it. Never having bothered with it before, I went ahead and ignored its release. Because ignoring things is usually the way I deal with problems.

Cut to a few weeks ago when I was strolling through my local used book store and spotted the Fraggle cartoon DVDs for a cheapo price. Being the weak-willed fanatic I am, I feel the urge to own just about anything with Jim Henson’s name on it, so I caved and bought the set. But what am I going to do with these DVDs? If I try and watch them, I’ll get bored and never finish. I had to set a limit, or perhaps even a precedent. I needed to watch the Fraggle Rock cartoons in one sitting. Not just for me, but so you don’t have to.

Over the next week, I’ll be posting my notes from my experience watching the FraggleToons. Everything you’ll read here was written live and in the moment, hopefully appropriately capturing my state of emotion at any given time. Come along with me on this journey of over 6 hours and 24 episodes of Fragglemation; we’ll laugh, we’ll cry, we’ll throw heavy objects at the TV. It’ll be fun!

So without further ado, I bring you My Day with the Animated Fraggle Rock! 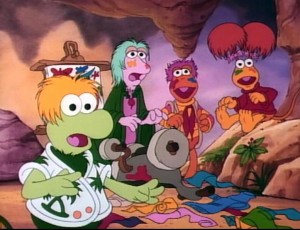 Episode 1 — No Fraggle is an Island

Ten seconds into the intro and I can tell that this show is going to try a little too hard to recreate the original show while just barely missing the point. The cartoon uses the same theme song, but instead of that awesome bass line intro, it sounds like an old MIDI file (and while MIDIs are retro, it’s a very different kind of retro than what we’re aiming for). All it does is remind us that the puppets are gone and we’re going to have to deal with these cartoon characters for the next few hours.

Also right away, we can see that the cartoon is going to try and take advantage of the new medium. There are lots of interesting-looking creatures, which didn’t need to be built by the Muppet Workshop. Plus, lots of Fraggle feet!

So, part of this first episode deals with Boober feeling “fed up to here”, which convinces the rest of the Fraggles to move away from the Rock, thus making them understand Boober’s need for loneliness. I question both the logic and practicality of this decision.

Apropos of absolutely nothing, Gobo sings a couple verses of “I Can Do It on My Own“, which was originally sung by Red in “Let the Water Run”. This show is trying so hard to be like the real Fraggle Rock, they’re even stealing songs! But of course, just like everything else, it’s just different enough to point out the fact that it’s actually, y’know, different.

One episode down, and while it’s a little off-putting, it’s not nearly as bad as I thought it would be. I might even go as far to say that it’s almost (dare I say it?) good! The quality isn’t anywhere near the original show, but it’s familiar enough to avoid all that eye-rolling. Then again, I wonder how I’ll feel after 23 more episodes… 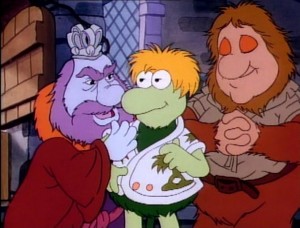 Boober found a “Wishing Stone”, and Wembley goes all Tom Hanks and wishes to be big. He doesn’t wish to get rid of the Gorgs or for unlimited Doozer sticks or an all-access pass to Universal Studios, but he wishes for a couple inches. If only Wembley had e-mail, he’d have offers for that every day!

The Doc and Sprocket scenes so far are interesting. The backgrounds are all photographs, rather than painted like most other animated shows. We never see Doc’s face, which reminds me of another Muppet-related cartoon (hmm, do you think Nanny’s real name is Mrs. Ardath?). In this episode, Sprocket does his Ned Shimmelfinney impression, which makes him look like he just ate a week-old chocolate-covered ball of mayonnaise. Silly Sprocket, you shouldn’t be eating chocolate!

In basic cartoon plot form, Wembley isn’t careful what he wishes for and keeps on growing until he can’t fit in the Rock anymore. So he goes into the Gorgs’ garden and is immediately accepted as a long-lost Gorg cousin, which further proves the theory that these three Gorgs are the only ones of their kind. They must be so lonely. Or desperate. Yeah, more like desperate.

Wembley wishing to be bigger and growing to Gorg-size seems very much like the sort of plot we’d see in the original Fraggle Rock, though I can’t quite picture how they might’ve done that. Would they have built a giant Wembley puppet? Or used some clever blue screen effects? I almost wish they would’ve tried it, if only to see how far they’d go to create the effect of a giant Fraggle. Somehow, the animated version just doesn’t have that same realism and scope to bring the “wow factor”. Probably because it isn’t real. And maybe a little scopeless. 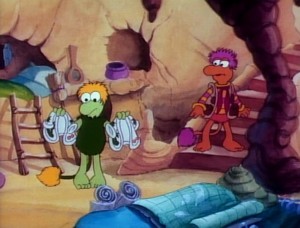 Episode 3 — Necessity is the Fraggle of Invention

This episode begins with Wembley trying to decide on which banana tree shirt to wear, which means that he spends the entire scene completely nude. Maybe there are some benefits to this cartoon thing after all…

Then again, this was just another episode about Wembley wembling, and then making some sort of important decision by the end. It wasn’t the Worst Thing Ever (WTE), but there was nothing that stood out about this episode in any way. I’m starting to worry that the enthusiasm I had after the first two episodes may not stick around much longer. 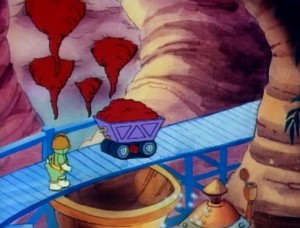 The first scene in this episode shows the Doozer stick manufacturing plant, which is under the Gorg’s garden. If I’m not mistaken, we’ve only seen this once on the show and once in a piece of stock photography. It’s pretty cool to see some sort of connection between the Gorgs and Doozers. Though it makes you wonder, how much easier would the Fraggles lives be if they knew they could just grab the Gorgs’ radishes from underground. We probably would’ve had a lot fewer episodes.

Here’s our first Uncle Traveling Matt bit, in which Matt watches a cowboy herd cattle. (Of course I’ve heard of cattle! Um, sorry.) The photographic backgrounds are back, so I guess that’s a cool little touch they’ll be putting in every Outer Space scene. But Matt’s clumsiness and accidental wisdom just isn’t the same without Dave Goelz’s performance. Oh those Silly Animators. You never know what they’ll do next.

So we have yet another episode with a cliché Fraggle plot: The Gorgs are doing something evil, the Fraggles cause a little mayhem in trying to fix it, and circumstances allow the problem to fix itself. And in the end, everyone gets to eat radishes, pleased with the return to the status quo, racism and all. 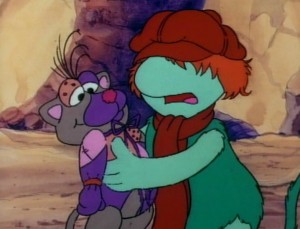 In this episode, Boober has a lucky item that makes him super brave, but then loses it only to find that the magic was inside him all along or whatever. Sound familiar? It should.

This episode and the last one feature more songs stolen from the original series: “Without a Hat” and “Go with the Flow“, both of which completely change the meaning of the songs. “Without a Hat” was originally about Boober’s reliance on inanimate objects, but now involves the Fraggles putting on hats to simulate their own cowboy round-up. “Go with the Flow” was sung by The Trash Heap to teach a “focus on the positive” lesson, but is now about Boober and Wembley exploring a river. Being pretty familiar with both of these tunes, I can’t decide if I prefer the changes because they help separate the cartoons from the puppets, or if I despise the changes because they tarnish the original messages. Either way, this sort of confusion is what I’ve been feeling since I started this little project. I wonder what the Trash Heap would say… 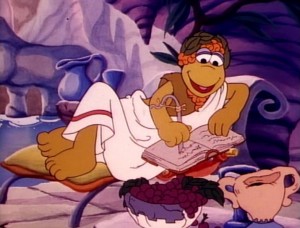 Episode 6 — Fraggle for All Seasons

Fraggle history time! Did you know that Fraggle Rock had its own Greek renaissance? Apparently it was known as “Fragglus Rockus”, and had its share of philosophers, ancient Doozer architecture, and, um, togas. Mokey is yet again in the center of a story about Fraggle Rock history, after her time traveling stint in “Mokey, Then and Now“. I kinda like the idea that Mokey is our official Fraggle historian. Though if that were the case, then all of our history books would be written in her hippy dippy poetry.

Mokey hangs out with her friends one-by-one, searching for the “Fraggle for all seasons”. Is it Red because she loves having fun? Or Wembley because he tries to be everyone’s friend? Or Boober because he loves… laundry? It’s probably not Gobo, because he’s kind of a dick. In the end, Mokey is crowned as the Fraggliest Fraggle, thus teaching the lesson that you can save a lot of time by being a little more egotistical. I’ve learned so much! 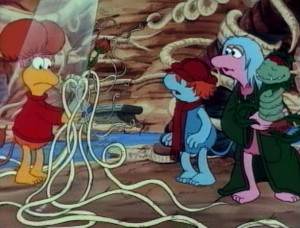 Red’s competitive nature gets out of hand! What an original concept! Uh oh, I’m starting to get cynical. That’s not a good sign for my animated Fraggle Rock journey.

In this episode, Red steals a small flower from Doc’s workshop for the Fraggles’ plant-growing festival, but the lack of sunlight and the addition of Gorg fertilizer (yeah, that’s probably Gorg poop… good luck getting that image out of your mind) makes the flower mutate and terrorize the denizens of Fraggle Rock. Normally these bizarre happenings don’t seem so out of the ordinary, but since this plant came from our own universe, it makes me wonder if there isn’t something paranormal about Doc’s house too. Maybe it was built over a Doozer burial ground. That would explain so many things…

Head on back for part 2 in just a couple days! I know, you just can’t wait.

Click here to criticize a 23-year-old cartoon on the ToughPigs forum!