My Day with the Animated Fraggle Rock, part 2

If you’re just joining us, then you’re in the middle of our 3-part look into the deeper meanings and inlaid themes of the Fraggle Rock cartoon, which provides a unique point-of-view into the inner workings of certain subcultures to which we are all familiar. But really, it’s part 2 of my experience sitting through the entire Fraggle Rock animated series in one single day. (The first way sounded smarter.)

Be sure to catch up with part one, and then keep on reading right here! 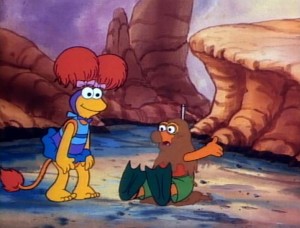 Episode 8 — The Best of the Best

It’s Red’s record breaking day! She’s setting new records in washing laundry, diving, and rock sculpting, all of which accomplish nothing but ticking off her friends. It sounds like she’s trying to break the record of being the biggest Fraggle jerk, but that title belongs to Gobo.

Two episodes about Red’s competitive streak in a row? Are the writers already running out of ideas? Are they failing to see the Fraggles as the three-dimensional characters they were originally conceived? Or are they just failing? All of the above. Fail. 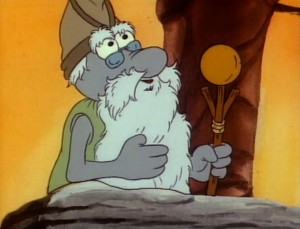 Episode 9 — Where No Fraggle Has Gone Before

Here’s our first glimpse of the World’s Oldest Fraggle, though he just seems old, rather than the silly, dotty geezer that Dave Goelz portrayed. And that’s just plain sad. The rest of the episode has something to do with Gobo traveling someplace new and spending too much time celebrating and not enough time preparing, then probably learning some sort of valuable lesson or something.

I have to admit, now that I’m just past the first third of my Fraggle Journey, my attention is starting to fade. There’s all sorts of excitement going on, what with the Gorgs chasing Gobo and Wembley up the side of a building, but there’s something so… two-dimensional about the whole thing. I just can’t put my finger on it. 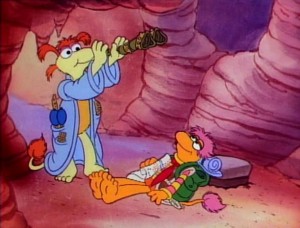 While Gobo laments his choice of profession, who shows up? A squirrelly-looking Cantus the Minstrel! He sings “Let Me Be Your Song” with a series of images of Gobo cavorting with strange creatures and exploring new landscapes. And as amazing as this might’ve looked on the live show, I still can’t help but compare it (unfavorably) to the original. With just the simple imagery of the puppet singing to an empty cavern, this song held twenty times the meaning it does here. Maybe it’s not that the cartoon is guilty of repetition or lack of talent, but that it could never have the soul that the puppet version had. Besides, why they would let anyone but Jim Henson sing this song is pure blasphemy.

Anyway, Fake-Cantus’s song lulls Gobo to sleep (as I’m sure it had the same effect on many of us) and he wakes up in ancient Fraggle times and meets Redith, Wemblith, Mokith, and Booberith, who allow him to create their first map and teach a valuable lesson in cartography. And then he stepped on a butterfly and when he got back to the present, the Germans won World War II.

I still don’t know what “Gobo’s Song” is. 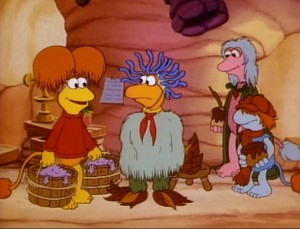 Episode 11 – Wembly and the Bemble

95% of this episode involves Wembley shouting “The Bemble! The Bemble!” and convincing everyone to overreact about a mythical creature. Of course, the Bemble turns out to be real. But not really. I’m not quite sure if the lesson here is to believe your friends when they’re concerned about something or not to make up crazy stories or to not believe crazy stories or that a “tickling monster” is the stupidest thing ever created. 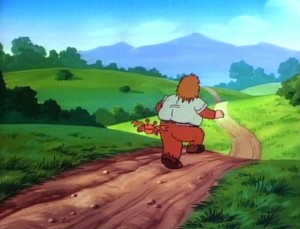 In our first Gorg-centric episode, Junior is appointed Ambassador so he can deliver invitations to the next big Gorg party. That sounds like a job for a mailman, not an ambassador. Since we rarely saw anything outside of the Gorgs’ garden, it’s a real treat to see what lies beyond! There’s a long road that leads into the mountains, which suggests some sort of civilization. Of course, Junior is incapable of anything beyond tripping over his own feet, so he ends up back at home before he can find the neighbors. Oh well, I guess we’ll just miss out on this opportunity to expand the Gorg Universe.

So now I’m more confused than ever. Do the Gorgs even have neighbors? If so, are they also Gorgs? Who paved that road, and where does it lead? Or is it a road that leads all around the universe in a big circle? That would explain how Junior ended up right back at home.

Though it’s probably for the best that they didn’t show us anything else from the Gorg world. Would we even consider it in-continuity if they revealed something so huge in the animated series? 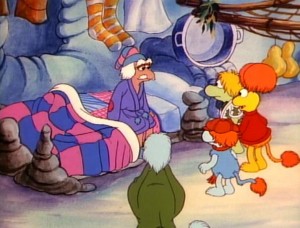 Uncle Traveling Matt is coming home! Again. For at least the third time. First in “Uncle Matt Comes Home“, and then again in “Uncle Matt’s Discovery“. It makes me wonder if the cartoon has anything new to say, not just in this episode, but in the whole scope of the series.

And now I’m at the end of the first disc (out of two). The title screen has been playing on a loop for a good 20 minutes because I am having trouble getting myself off the couch to put in the second DVD. I feel like I’ve been watching this cartoon for a week, and I can’t believe I’m only halfway through. But I promised myself (and you faithful readers) that I would get through this series in one sitting, and by Pa Gorg’s Beard, I’m gonna do it! 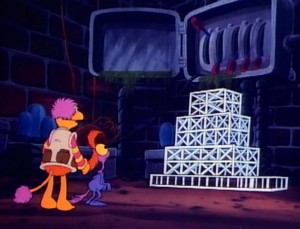 With great trepidation, disc two has been inserted into my DVD player and we’re on our way. I find that I’m getting a little more tired, a little less patient, and a little less entertained with each episode that goes by. The cartoon isn’t good enough to hold my attention for this amount of time, but it’s not bad enough to revel in its horribleness. Is it bad that I wish that this show was worse?

From the title of this episode, I was expecting something similar to “The Bells of Fraggle Rock“, when the Fraggles all freeze and almost die of hypothermia. But no, the “freeze” in this episode has to do with the crisis of the Fraggle pond dipping below room temperature. So, uh, I guess cold water is just as thrilling as freezing to death, right?

And then of course, Gobo sings “Shine On, Shine On Me“, which was originally sung to celebrate the return of life to Fraggle Rock in “The Day the Music Died“, but is used here to celebrate the return of electricity to Doc’s workshop. Once again, this episode is lacking something in importance, if only by comparison. Which is the only way any of us could possibly view this cartoon. 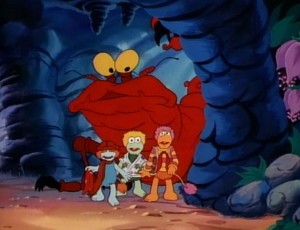 Here’s an episode in which Boober assumes something horrible happened to Red because he found a stained shirt. Some exciting things happen and some Fraggles cry because they think Red died. But I have to admit, I paused this episode halfway through to watch some Star Wars fan videos on YouTube, so I might’ve missed something. But I doubt it. Is this the first sign that I might not make it all the way to the end of these DVDs in one sitting? Or is it a sign that I really like wasting time on YouTube?

I still have over an hour and a half of animated Fraggles left to watch today. I’m seriously starting to doubt my ability to be able to actually, y’know, watch it all. 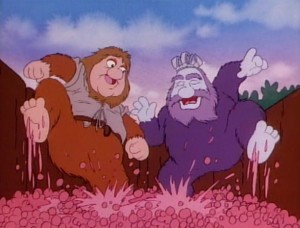 We get to see yet another example of the Fraggles and Gorgs’ coexistence in this episode, when Boober discovers that the Sweet Water Lake, which also acts as a reservoir for the Gorgs’ yumberry tree, is dried up. What’s interesting is that neither species actually needs the sweet water. The Fraggles just think it’s delicious (so delicious, in fact, that the possibility of losing it forever convinces Boober to put himself in the path of Junior Gorg’s rage) and the Gorgs just enjoy the fruit of the yumberry tree. Not to downplay the benefits of delicious food and beverages, but I can’t say it’s important enough to make anyone care.

It’s a valiant effort on the writers’ part to try and find another connection between the two species, but the running theme in the cartoon is that neither one even comes close to acknowledging the link like they did in the original series. It seems like they’re hardly even considering the “let’s make a show to bring about world peace” idea. Could a show all about these conflicts between the species bring about a world war instead? It’s a good thing we have the original show to keep us from the horrors the cartoon might bring about!

Head on back here in just a few days for our final chapter in My Day with the Animated Fraggle Rock!

Click here to declare Fraggle war on the ToughPigs forum!