Song of the Cloud Forest 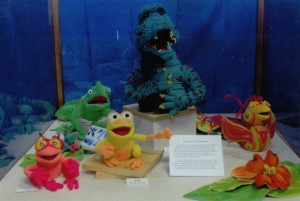 In Leland, Mississippi, there’s a delightful little two-room museum called Birthplace of the Frog: The Jim Henson Delta Boyhood Exhibit. If you’ve never been to it, I highly recommend that you make the trip. The tour guides are well-informed and charming, the walls are covered with nifty Muppet merchandise that you might not otherwise get to see in person, and there’s a giant Kermit doll with whom you can take photos. 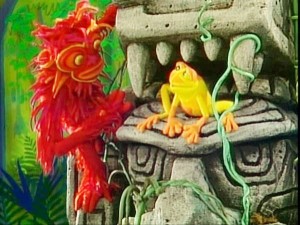 In a way, that’s very appropriate. The special stars a golden toad named Milton (Dave Goelz) who is one of the last of his kind and who dreams of finding a mate. Much like Milton, the Jim Henson Company of today is doing whatever it can to survive, making do with the limited resources it has left now that its best-loved properties have been stripped away.

That reduction of the company’s library has allowed minor Henson properties like this one to get a lot of attention that they wouldn’t have otherwise. Like Dog City, Song of the Cloud Forest is available on DVD. Neither of those programs were ever released on VHS, because the Jim Henson Company still had a stake in Kermit and Piggy and Elmo and Cookie Monster. Back in those days, they had no reason to think about Song of the Cloud Forest. But now it’s held up at the Jim Henson Museum as a shining example of the man’s work.

Can “Song of the Cloud Forest” – a random half-episode of a show no one watched 25 years ago – handle that level of responsibility? Much like Milton’s quest of finding love and repopulating the rainforest with golden toads, it seems unlikely. And yet, much like the way Milton’s song ends up attracting a girl named Ruth in the end, I think this special could absolutely be that standout example if enough people paid attention to it. This is an absolutely delightful program.

First of all, the script is by David Young, who wrote a lot of the most thoughtful and mature episodes of Fraggle Rock. It strikes the same tone – a deft balance of melancholy and hope – as many of his classics for that series. Different things here remind me of “Marooned,” “Red’s Sea Monster,” and especially “River of Life.” 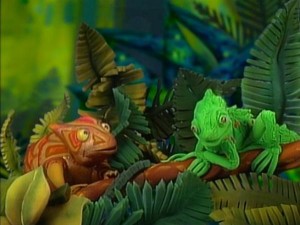 This special is designed to push a very specific message – the rainforests are being destroyed, animals are dying, and it will have terrible consequences for us all – but unlike the Oceans episode, it delivers that message in exactly the right way: by showing us first an interesting world, and then characters worth caring about.

The visuals are best-remembered thing about this special, and justifiably so. Even after all these years, the computer-generated backgrounds look amazing. This was a new process for Henson, and the experiment pays off wonderfully. Nothing about this gorgeous alternate universe – all jagged edges and neon colors – resembles our real world, which makes it a whole lot easier for me to buy into the reality of it. From the opening sequence where the animals all play instruments, it’s clear that this is a special place.

Even better, it’s populated with characters worth caring about. Dave Goelz and Steve Whitmire display their typical chemistry as Milton (our worried-but-practical hero) and his goofy friend Wilf the howler monkey. The rest of the animals aren’t as well-developed, but they’re all fun and engaging. It’s easy to imagine an ongoing series with this cast, as they’d certainly lend themselves to additional exploration. 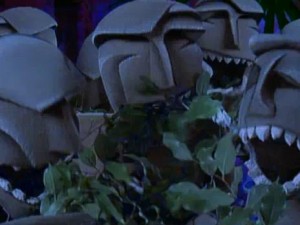 When these creatures worry about Milton and the forest, it seems like a genuine concern. When they’re horrified at Ralph Robin’s absurd vision of rainforest-chomping humans, we become horrified right along with them. And in the end, when Milton finally unleashes the song that connects him to all of the forest’s living things, we feel a palpable sense of relief. This is a lovely place to visit, and it’s wonderful to imagine that it will keep on existing after we leave.

Like “Song of the Cloud Forest,” the MuppeTelevision segments have a large cast of new characters, played by talented puppeteers like Steve Whitmire, Kevin Clash, Gord Robertson, and Fran Brill. This was partially out of necessity – Frank Oz was off directing movies, Richard Hunt was in England shooting Ghost of Faffner Hall, and most of Jerry Nelson’s characters are inexplicably absent. But whatever the reason, this was a bold new Muppet gang – for the 80s, and for the future! 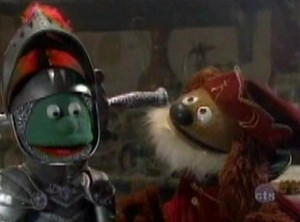 That was the plan, at least. “Fitness” is only the 7th episode, and it seems like the creative team is already realizing that those characters aren’t going to work out. Some of them make appearances here, but for the most part they’re pushed aside so we can get updates on all of our old friends played by Jim Henson.

Jim is the unquestioned star of the episode, which shouldn’t be a surprise. His name is in the title, after all. He has every right to take the spotlight. What’s fascinating, though, is how those characters are used. Nearly all of his Muppet Show regulars show up, and mostly in ways that are different from their old shtick. The Swedish Chef is now part of a double act, trying to exterminate French chef Jacques Roach. Dr. Teeth has become a record producer, hanging out in the background of a number with special guest Smokey Robinson. Rowlf basically plays Dr. Bob, but they had the terrible idea to dress him as Merlin and use only labored medieval puns. 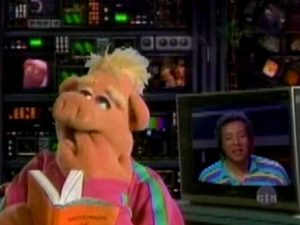 The most surprising change is the use of Link Hogthrob, whose panic over getting Canadian Swine Fever provides the main control room plot. In theory, it’s exciting to see Link get such a big role. Link was a lot of fun on The Muppet Show, and with very few exceptions he was a sketch character, not a backstage one. But this attempt to expand him falls flat. He repeats the same joke a half-dozen times, and it wasn’t all that funny the first time. Mostly it just makes me wish his old co-stars Piggy and Strangepork were around instead.

Fortunately, two classic Muppet Show teams do appear intact, because the episode also has a very welcome guest star – Richard Hunt, in his only appearance on the show. Hunt appears just twice, both times as part of a classic duo. Statler and Waldorf get in a few good zingers, and unlike Jim’s other characters, they appear exactly as they did in their heyday – cracking jokes from a balcony. 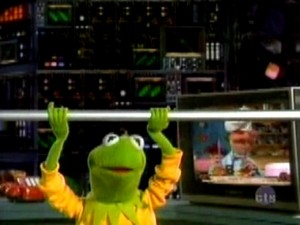 In this particular episode, it’s striking how the show finds its greatest success when it stays closest to The Muppet Show – sneezing chickens zipping around the room, Kermit casually doing pull-ups between sketches. The closing number, “Jump (For My Love)” is exactly the kind of high-spirited song that’s perfect for the end of the show.

And yet, all of those moments would be better if they happened in the Muppet Theater. The control room has no sense of space. On The Muppet Show, the chickens would have been crashing into things, which is much funnier than just zipping back and forth horizontally. Kermit’s workout would have occurred somewhere tangible like his desk or the dressing room, so the incongruity of a pull-up bar would have added to the joke. Worst of all, the song happens in a visually dull blank white room instead of on a set of any kind.

There’s a lot of good stuff, but the show isn’t quite there yet. At this point, MuppeTelevision is a strange hybrid of The Muppet Show and something that isn’t nearly as appealing. Given time, I really do think it would have found a voice of its own. Come back next time, when we’ll get a better look at what that voice might have been (Hint: It’s incredibly 80s.) 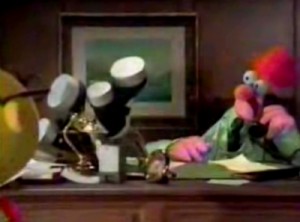 Click here to wear a dapper yellow sweatsuit on the Tough Pigs Forum.