My Weeks with The Jim Henson Hour, Part 2: Oceans/Lighthouse Island

It had to be this episode.

I’m not exaggerating when I say that The Jim Henson Hour is one of my favorite TV shows of all-time. I once wrote a twenty-page book chapter about the series, and I’d write a whole book about it in a heartbeat. More than anything else in his career, the show allowed Jim Henson to blend all of his passions. It’s undoubtedly flawed, but in just 12 episodes, it showed more creativity than some shows do in 12 seasons – a startling mixture of 1960s experimental Jim, 1970s mainstream comedy Jim, and 1980s fantasy Jim. It’s a thrilling, exhilarating marvel, and I’m comforted just knowing it exists. I’m so excited to look at each of the other five episodes I’ve been assigned.

But this one? This is the pits. It’s not that I object to the premise of either half, it’s just that they’re both executed very, very poorly. Let’s take a look at what went wrong. 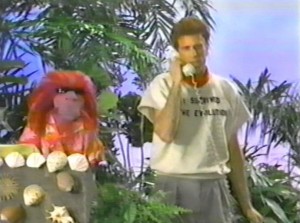 I’ll say this for Ted Danson – He’s really passionate about saving the ocean.

Even if the six clearance copies of his book Oceana that I saw at Barnes & Noble the other day didn’t make that obvious, this episode’s final MuppeTelevision sketch certainly would. The episode’s overall theme is “Oceans,” and it contains some moderately entertaining silliness about Muppet Central being flooded (plus one absolutely delightful moment of Kermit doing an impromptu dance in the puddles), but that final segment dominates the episode to such a degree that it’s almost impossible for me to talk about anything else.

In the sketch, a fish named Ted (voiced by Danson) grows legs, jumps onto dryland, and evolves into a human (played, naturally, by Danson). Along the way, he makes all kinds of “progress” that slowly destroy the ocean. His old fish friends call him to tell him that they’re dying, but it’s too late. They all die, and the episode ends with Kermit saying a grief-stricken “Good night, everybody” to the camera.

While I applaud the message of environmentalism, I can’t imagine that this heavy-handed mess convinced anyone watching to change their views on the subject, let alone their behavior. By the time Ted says the actual words “I shouldn’t have dumped stuff in the ocean. I’ll stop” out loud, the show has moved so far from the realm of entertainment that it’s hard to imagine anyone paying attention (except the already-conscious who are excited to hear a lecture on saving the environment.) 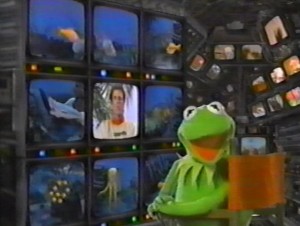 It’s not that the Muppets shouldn’t ever do serious messages. They absolutely should, and they did so with great success many times on The Muppet Show – the stark, lovely anti-hunting version of “For What It’s Worth,” for example. Even more strikingly, one of the best episodes of Fraggle Rock (“River of Life“) has essentially the same message as this sketch. So why is that episode a brutal, heart-wrenching masterpiece, while this one just makes me shake my head?

The message isn’t the problem here. It’s how that message is delivered. I get that this isn’t The Muppet Show, but there are reasons why that series was so entertaining. One of those reasons is that every single episode ends with a big musical number, leaving the audience with a smile on their faces. “For What It’s Worth” isn’t even the closing number of the Bob Hope episode – that’s the much goofier “Don’t Fence Me In.”

Similarly, “River of Life” ends with the rousing, soaring “We’re Part of Each Other.” But more importantly, it stars Boober Fraggle, a character we’ve known for over three seasons by that point. When Fraggle Rock – one of TV’s most wonderful places – is ravaged by pollution, it rips me apart inside. When Boober saves it, I feel joy and relief like I’ve rarely felt watching television. When I think of that episode, I remember how strongly I was moved and inspired.

Here, I just remember how dour everything is, because it’s a five minute sketch starring a bunch of characters I’ve never seen before or since. There’s no reason to feel for them, so there’s no impact when they all die (in one of the story’s two timelines). There’s no closing number because all ocean life is dead. Kermit doesn’t thank the guest star because the guest star just killed all ocean life. There’s no joy of any kind – just a sad cut to commercial. This was billed as a TV comedy show, but it feels more like a funeral for all ocean life. The second episode is too early for that to be effective.

There is some fun stuff in this episode – most notably a Steve Whitmire-performed fish singing a terrific version of “Splish Splash” – but it all gets swallowed up in the audience-shaming slap-in-the-face finale designed to make us feel bad for doing something as frivolous as watching television.

Remarkably, the second half is even worse. 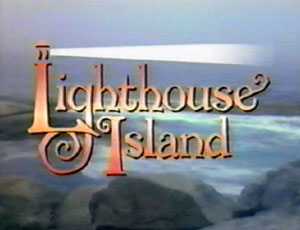 The Muppet Wiki page for this episode’s second half, Lighthouse Island, tells you that it’s a fantasy about a teenage boy named Zeb Norman (played by Chris Makepeace of Meatballs semi-fame) who visits a mysterious island to find a present for his fiancé. It tells you that he encounters a variety of obstacles, including a sea monster that turns into Jerry Nelson. It even has a video revealing the show’s twist ending, so you can skip the first 21 minutes.

Skipping the first 21 minutes is a very appealing prospect indeed, because what Muppet Wiki doesn’t tell you is that Lighthouse Island is unquestionably the worst thing Jerry Juhl ever wrote.

I don’t say that lightly. Jerry Juhl is a genius, he’s one of my heroes, and the vast majority of his work is sensational. Lighthouse Island is, on the other hand, is thoroughly mediocre and decidedly sub-genius. Given the chance to stretch his abilities and create a serious fantasy, he falls flat on his face. The opening narration contains the sentence, “It won’t surprise you to hear that Lighthouse Island is an island with a lighthouse.” Things don’t improve from there.

I get no pleasure from this. It’s heartbreaking, especially since this was an idea Juhl had in mind for 18 years. As outlined in this Jim’s Red Book entry, he had envisioned it in 1971 as an anthology series, with each episode focusing on a different resident or visitor in the magical island community of Lands End. The story we finally got in 1989 – with young Zeb Norman and his mermaid bride Rosalie – was intended as the pilot all those years earlier. 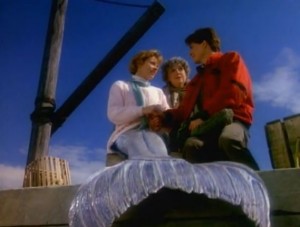 For his sake, I hope that sitting in a drawer all those years caused it to decay, because I hate to think that Jerry Juhl could write anything this awful. The problem isn’t just that both parts of the double-twist ending are predictable from the moment we first see a photo of Rosalie (from the shoulders up, against a backdrop of the sea). It’s not just that the characters are drab and derivative (Everyone in town is said to be afraid of the Clara the Magic Person, but she never does anything scarier than the occasional high-pitched giggle). It’s not even dreadful verbal gymnastics like this bit about the No Name Tavern – “It hasn’t got a name. No name isn’t a name. If no-name was a name then there’d be a name. But there’s no name. Not even a no-name.”

The problem is that every bit of it is completely, unforgivably dull. I only remember the details I mentioned because I was taking notes to write a review about it. Otherwise it would’ve all slipped my mind by now. It just moseys along for 25 minutes, sending its characters from one tepid excuse for magic to the next, never eliciting any response (until a sigh of relief that it’s over).

The sense that anything can happen is one of the most appealing things about The Jim Henson Hour for established fans, but it was also potentially one of the most puzzling aspects for viewers at the time. Like Ryan mentioned earlier this week, it was probably jarring enough to go from the Muppets to the Storyteller. But at least the Storyteller was possibly familiar, so some audience members might have assumed that every episode would contain those two elements. In that sense, this is the first episode to break format. Unfortunately, it probably gave many viewers the impression that the second half would consist of half-baked ideas Jim Henson was too rushed to complete.

Even on the show’s best weeks, the Muppet and experimental segments were often at odds with each other. Here, the more serious closing segment can be seen as an attempt to bridge that gap. It’s a real shame that the attempt failed, because I do think it was a noble one. But make no mistake – it did fail. Spectacularly.

Things are only going to get better from here, folks, so come back next week!

Click here to become a merman on the Tough Pigs forum!