Lately, my Tough Pigs articles seem to have a Pixar slant. Whether it’s talking Toy Story at Christmastime or discussing how Muppet*Vision 3D can act as a complement to the new Toy Story Land coming to Walt Disney World, I sense I’ve unwittingly created a pattern. Well today, that comes to an end. I’m not going to talk about Buzz and Woody.

I’m here to talk about Mike and Sulley. (Please, come back!)

Yep, the third and fourth episodes of Muppets Tonight feature the stars of the future Pixar smash, Monsters, Inc. (On a show that stars Fungus on a semi-regular basis!) Crystal and Goodman are natural fits as guest stars. They’re comedic actors, both had multiple appearances on Sesame Street by that point, and they’re no strangers to the variety format (Crystal having spent time as a cast member on Saturday Night Live, and Goodman hosting a whopping 13 episodes of the show). Plus, their breadth of work in the family comedy genre made them ideal celebrities to star on the fledgling show. So without further ado, let’s dive right into the episodes. 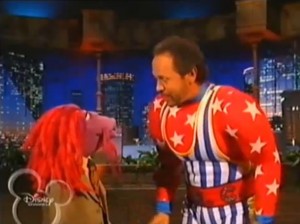 In Crystal’s episode, Bill Barretta, who was still relatively new to the Muppet troupe, is an absolute standout. He can take the simplest comic premise (such as the opening of the episode, where Clifford has to remind new doorman Bobo not to let anyone into the studio if their name isn’t on the list) and turn it into something really funny. There’s just something wonderful about Bobo’s regular-Joe mannerisms that make for a fun contrast with the exaggerated performances of the other Muppets.

Following the opening titles and their incomprehensible backing vocals (“You’re gonna see something… never have seen? You’re gonna hear things you never would hear?” We may never know for sure), Billy Crystal makes his grand entrance, dressed as an American Gladiator. Considering American Gladiators’ original run would end less than two months after this show originally aired, that joke got dated really quickly. Crystal claims that he’s brought a rare screen test from one of his most famous movies, which launches us into that venerable standard of The Muppet Vault: Movies!, a scene from When Harry Met Sally, but this time, Meg Ryan is out and Miss Piggy is in. 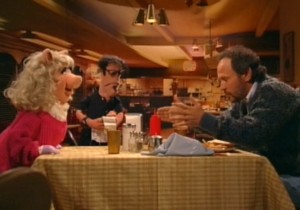 It’s no secret that not everyone is enthralled with The Muppets, featuring beloved childhood characters tackling more adult content. But what not everyone realizes is that the Muppets have been doing that for years. The When Harry Met Sally sketch is a perfect example. What we see is a remake of the infamous diner scene, only the faked orgasm is replaced with a faked sneeze. The mannerisms are nearly identical, and kids wouldn’t get that part of the joke, but adults get exactly what’s going on. I actually enjoy their family-style version of the scene. It almost says “this is the only way we could get away with this.” And like many great Muppet bits, it works on different levels for adults and kids, but everyone can enjoy the joke.

For me, 1996 meets 2016 again in the following scene, where the crew pesters Crystal into pulling out his famed impressions of Sammy Davis, Jr. and Muhammad Ali. Crystal says he doesn’t want to keep doing the same shtick over and over again, and in a way, that’s exactly what happened to the Muppets at the time. Muppets Tonight has a tendency to put older characters from The Muppet Show’s era in the background, leading with newer characters and more up-and-coming Muppet performers. The show definitely has a feeling of a sort of passing of the torch, which could be expected as long-time performers like Frank Oz and Jerry Nelson started to reduce their workload with the Muppets.

Wow, after that deep thinking, thank goodness there’s a really funny sketch to follow, featuring that classic doo-wop song, “The Lion Sleeps Tonight.” The various animals of the jungle sing the song, while the lion (performed by Frank Oz!) is desperate for a little shut-eye. After pleading with the animals to stop singing, the lion chases the other animals off the set and around the KMUP studios, leading to a great running gag for the rest of the show. I really love the visuals in this one. It seems like a marriage of the design and artistry of The Jim Henson Hour with the humor of The Muppet Show. 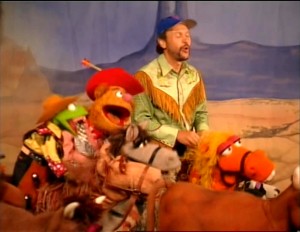 Going back to retreading old territory, two later segments in the show are very evocative of past Muppet Show sketches: “The Eagle’s Nest,” a panel on hot-button political issues led by Sam the Eagle, is extremely similar to the panel discussions from the first season of The Muppet Show. Right after that is “City Schtickers,” a parody of Crystal’s popular City Slickers films, where Kermit, Fozzie, and Crystal crack Western jokes and sing “Ragtime Cowboy Joe” while their horses heckle. I don’t know about you, but to me, it reeks of Bob Hope singing “Don’t Fence Me In.” (Though that could just be the smell of the horses.) And no wonder: Crystal’s riding none other than Paul Revere!

The rest of the show is pleasant enough, with some decent but predictable sketches in the UK spot “The Tubmans of Porksmith” (Spoiler alert: Howard’s fat!); a bit with Bobo, Johnny Fiama, and Sal (Spoiler alert: Sal says/does something dumb!); and the fun closing number “Now You Has Jazz,” where Crystal strangely implies that the best jazz music is done in an alleyway by the light of a trashcan fire. (Public service announcement: Jazz music is best played indoors, unless you’re in New Orleans. They seem to be pretty cool with it there.) 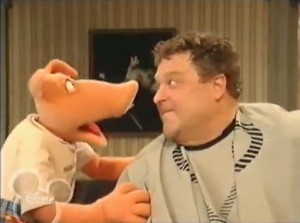 The vibe I get from the early episodes of Muppets Tonight is that they were truly trying to introduce new characters to compliment the ones people already knew and loved. Two of the biggest beneficiaries of this emphasis are Andy and Randy Pig. Now, of all the Muppet fans I’ve gotten to talk to over the years, Andy and Randy are kind of a divisive topic. People either love them (They’re so stupid, they’re hilarious!) or hate them (They’re so stupid, the writers should be shot!).

Well, if you’re one of the people who hate Andy and Randy, avoid this episode at all costs, because they’re front and center. It opens with John Goodman preventing them from electrocuting themselves while changing a light bulb (apparently, only Crazy Harry can play with electricity), and in gratitude, Andy and Randy pledge themselves to be Goodman’s slaves. Naturally, their incompetence leads to Goodman having his stuff damaged and repeatedly getting injured.  Goodman even feigns falling out a window so that Andy and Randy can save him, making them “even,” but of course they bungle saving him, leaving Goodman to do the closing number from his hospital bed in a bout of Andy and Randy-induced insanity. 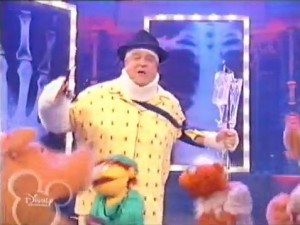 Goodman’s cover of the 60’s hit “Feelin’ Alright” plays as a fever dream, laced heavily with psychedelic imagery and Andy and Randy appearances. And for those who might be concerned for Goodman, he’s playing along as a bluesman, so it looks like he’s fine. (And he comes away with an idea for a movie.) But the best part of the plot is at the end, where Goodman is back on the set of Roseanne, safe and sound, until Andy and Randy arrive, announcing that they’ve joined the crew of the show to stay with him. Personally, I like that little stinger. It’s nice to see the Muppets out in the real world, interacting with other shows. Plus, it’s worth it, if just for the cameo by Jerry Nelson.

Otherwise, Goodman makes for an excellent guest star. It’s clear he’s game for anything, whether it’s a World War II drama with a platoon of rats or staring in an astronomic parody of The Honeymooners. In fact, the only complaint I have is that he isn’t in more of the sketches. Goodman has good chemistry with the characters. I’m surprised he hasn’t done anything with the Muppets since this episode. Had Goodman been involved, I’m convinced Muppets Most Wanted would have won the Academy Award for Best Picture, without even being nominated.

Elsewhere, the noble experiment of blending new characters with old continues. This one happens to have a good mix. While this episode has “Tales from the Vet,” the UK spot “Fairyland PD,” and a Johnny and Sal bit, it also has Gonzo and Rizzo having “fun” with pencil sharpeners and Miss Piggy and Fozzie in the “Lunarmooners” sketch. It’ll be interesting to see if this show finds equilibrium for its characters. 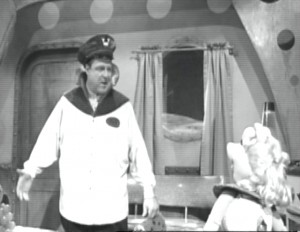 It’s clear that the people in charge wanted folks to know that Muppets Tonight was not The Muppet Show, though it did have the same idea at its core. A big effort was made to have the audience fall in love with a new stable of funny, weird, and likable characters the same way they did back in the 70’s, and for me, it’s starting to work. Some of the characters have managed to stick around twenty years later (mostly Bobo and Carl), so it’s clear there’s something succeeding. But we’re only four episodes in, so it’s too soon to tell if this experiment is an underappreciated classic or failed attempt to recapture the Muppets’ glory days.

Click here to have what Miss Piggy’s having, only less pepper, on the Tough Pigs forum!