In my last review, I felt that Muppets Tonight was still trying to find a sense of equilibrium between old and new, family-friendly and edgy, and timeliness and timelessness. The show continues to find itself in its seventh and eighth episodes with guest stars Sandra Bullock and Jason Alexander. Back in 1996, these were very timely choices for guest hosts. Bullock (years before she won an Academy Award) was a rising star in action films and romantic comedies, while Alexander was one of the stars of Seinfeld, one of the biggest sitcoms on television at the time. 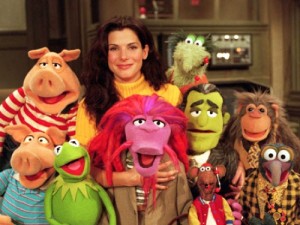 As for content, in Bullock’s episode, parodies reign. The main plot itself is not only a parody of Speed, but a sort of reworked version of the “First Show” episode of The Jim Henson Hour’s MuppeTelevision segment. A mad bomber calls into the station and claims that a bomb will go off if the show’s ratings go below 50. (Which of course is an actual level of rating. Yep, 50 will do. Just go with it.) So naturally, the show goes to a throw-everything-at-the-wall-and-see-what-sticks format, with parodies galore, from Sid Knishes and the Mosh Potatoes to Frankie Yakovic and his Polka Dots to Bullock starring in the new romantic comedy “While You Were Slapping.” (Think a romantic/dramatic scene, but with more slapping. Whatever image you’ve come up with in your head, you’re probably right.)

Meanwhile, Gonzo’s Muppet Babies tape gets mixed up with Zippity Zap’s Seinfeld tape to produce “Seinfeld Babies,” where “The Contest” is changed from a more– ahem- adult topic to diaper changes. It’s another prime example of Muppets Tonight taking an adult pop culture moment and making it more accessible to all ages. Everyone gets the joke, but on different levels. 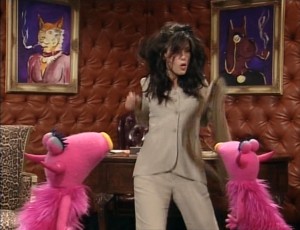 Speaking of Muppet Babies, this episode also has an unusually high amount of references to the Muppets’ own past works. KMUP’s hold music (which the mad bomber seems to enjoy) is none other than Kermit’s performance of “The Rainbow Connection,” straight from The Muppet Movie’s soundtrack. Meanwhile, another iconic Muppet song appears in another sketch. Bullock plays a psychiatrist analyzing her patient, Kermit, who notices a strange occurrence every time he says the word “phenomena.” Of course, the Snowths appear, and begin singing “Halfway Down the Stairs.” Kidding! I bet even someone who still calls him Fonzie Bear could guess this one. The whole thing’s an excuse for Bullock to break out in a chorus of “Mahna Mahna.” (Or Mah Na Mah Na, if you want to be pretentious.) I do appreciate her willingness to throw herself into the verse as wild and unhinged as any time Jim Henson performed it. Bullock doesn’t appear in the episode nearly enough, but when she is there, she goes for the gusto, which works great when you’re onscreen with Muppets. 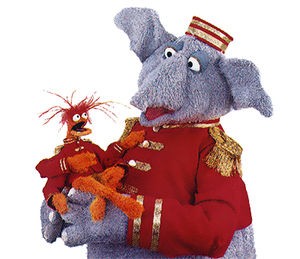 But perhaps the most timeless part of the whole show is Seymour and Pepe taking to the stage for the first time on the show. The bit is impossible to describe without ruining the joke, so I’ll just link it here. It may very well be one of the funniest things ever done on Muppets Tonight. To me, this is the sketch where Pepe truly becomes the Pepe we know and love. (Or at least we know and tolerate. Or at least we know and don’t picket on the street in front of Disney’s offices about.) When the joke fails, he doesn’t stay lighthearted and try a different joke like Fozzie would. If it bombs, it’s the audience’s problem. To me, that’s Pepe. He never thinks it’s his fault, there’s always someone else he can shoulder the blame onto. You have to get with him or get out of his way. He may be the only one to come close to Miss Piggy in the diva category. It’s moments like these, when you see a character rise above the deluge of new faces to take his place in the Muppet roster, that make Muppets Tonight a series worth revisiting. 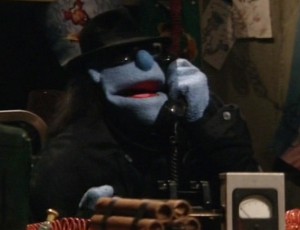 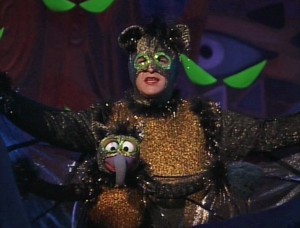 Puns and parodies continue to dominate in Alexander’s episode, which continues the longstanding Muppet tradition of changing character backstories to suit the needs of the plot. The premise is that Gonzo and Alexander went to college together at the South Bay Regional Polytechnic Institute for the Performing and Industrial Arts Night School, Downtown Campus. (I guess that means Gonzo went to Danhurst College’s grad school.) Gonzo and Alexander’s reunion inspires them to remount their ill-fated musical production of “Bats,” which ultimately was the wedge that drove them apart back in the day.

Alexander believes that the acting and original songs should be the centerpiece of the show, while Gonzo wants to put in pop music and special effects. Disagreements become arguments, prompting both of them to leave the production. Eventually, Clifford and Rizzo trick Gonzo and Alexander to do the production as the closing number, and when Alexander’s acting bores the audience, Gonzo’s disco music and lasers save the day. Where most viewers might have expected the two to compromise to make the show amazing, eventually, Gonzo is the outright winner, which may be a pushback to having the show be completely family-friendly. (At least that’s what I think. I think a lot about Muppets. I guess that’s why I’m here. Well, that, and I work for free.) 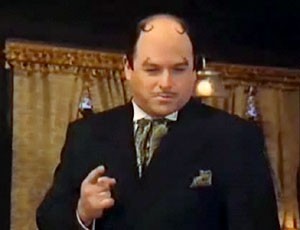 Even more surprisingly, Gonzo and a musical about bats isn’t the weirdest part of the episode. This may be one of the oddest assortments of sketches for an episode so far in the series. Alexander appears in two parody segments: the first, “Murder on the Disoriented Express,” where he plays Agatha Christie’s iconic character Hercule Poirot (who everyone gets confused with Hercules, and eventually Superman), gets repetitive quickly, while the second, “Muppet Bandstand,” has Alexander boogieing with Miss Piggy in the late 1970’s while host Kermit watches on. (Because we all know Kermit and Piggy had nothing to do in the late 70’s.) There’s also a UK spot with Polly Lobster and Clueless Morgan. It’s nice that these characters found something to do after Muppet Treasure Island, but it’s a bit short and not up to their fun dialogue found in the film.

Meanwhile, the Muppets’ past continues to creep its way into the show with “Pigs in Space: Deep Dish Nine” (“…The Next Generation of Pigs in Space,” if you want to be insufferable). Considering how popular the original “Pigs in Space” sketches are, I’m surprised that Muppets Tonight only did this sketch three times in the entire run. Princess Vendela (conveniently played by supermodel Vendela) boards the ship, which I’ll call the USS Swinetrek-A. She says she will take the crew members as her slaves, to which the males (i.e., everyone but Miss Piggy) readily agree. Maybe it’s me, but slavery sounds like a bad thing, even if the slave master is a gorgeous supermodel. 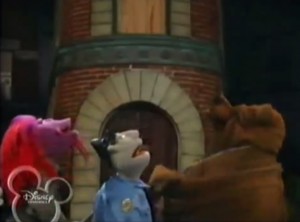 Still, it’s not as frustrating as this week’s “Fairyland PD” UK spot, which may be one of the darkest things I’ve ever seen in a Muppet project. (And I’m including “Shiver My Timbers,” which still creeps me out to this very day.) Clifford and Bobo come to a building to talk Humpty Dumpty off a ledge. Bobo tries to take him back to “the good days” of high school, which prompts Dumpty to jump. The officers agree there’s no saving him, so they decide to do the next best thing: make him into an omelette. Think on this one, dear reader. In a family-friendly show like Muppets Tonight, a character commits suicide. Suicide. On a Muppet show. I can’t think of that happening anywhere else in the Muppet universe. I wonder how the discussion on that happened…

PRODUCER: Okay guys, we need to prove that this isn’t your parents’ Muppet show. How can we do that?

WRITER: How about we have Humpty Dumpty… commit suicide! For laughs! And then…we have Clifford and Bobo decide to eat him!

EXECUTIVE: But wouldn’t people be upset to see that in a Muppet production?

PRODUCER: It’s an egg! Who cares about an egg?

PRODUCER: Sacrifices must be made in the name of edginess!

EXECUTIVE: Well, I’m the guy who greenlit Capitol Critters, so it’s not the worst decision I’ve ever made.

I’m sorry, but I can take some cynicism when it comes to the Muppets, but this goes too far, at least in my opinion. I need something to calm me down. Something that I’ll always find funny. Something like Muppet bloopers. Thankfully, both Bullock and Alexander’s episodes have them playing over the end credits! Those are always good, and they’re great ways to show what skilled improvisers Muppet performers are. I’d vote for any candidate that promised me more Muppet bloopers. Those are like gifts from heaven. Anyhow, that puts us at the end of two more episodes of Muppets Tonight. The search for balance continues, even if the line between good taste and tastelessness can get a little dinged up now and then. 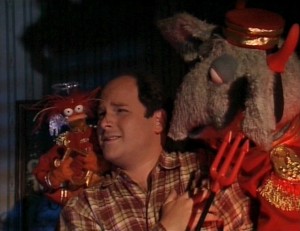 Click here to cross an elephant with a rhino on the Tough Pigs forum! 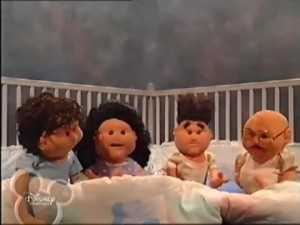