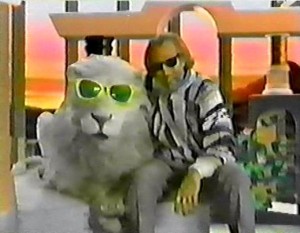 And we’re back.  After Dog City and its departure from the standard episode structure, The Jim Henson Hour returns to the “half an hour of MuppeTelevision, half an hour of some crazy thing Jim Henson felt like making” format — but something is different. It’s right there in Jim’s opening remarks, in which he wishes us a Happy Mother’s Day: This is the week when the show was moved to Sunday nights. Also, don’t forget to call your Ma.

It wasn’t just any Sunday night time slot, either. This was the slot normally occupied by The Magical World of Disney, the prime time home of classic and recent Disney movies, as well as original productions like Mr. Boogedy, which scared the crap out of me. It was certainly a step up for the Henson Hour after its original Friday night time slot.  As far as I can tell, The Jim Henson Hour replaced a show starring Melvin van Peebles called Sonny Spoon, which sadly was not about a talking spoon. That’s what Jim Henson was talking about in that quote that’s on Muppet Wiki where he says, “They put us in a time slot that they had been consistently not doing very well in, and we also did not do very well.”

And it’s true, unfortunately.  This is the episode where Kermit learns about ratings, so we might as well talk about The Jim Henson Hour’s ratings.  They were pretty dire, with the show consistently placing in the bottom five shows for the week.  So this Sunday night thing was less a vote of confidence than an act of desperation.

But why was it failing? America was still fond of the Muppets, right? Muppet Babies was in the middle of its unusually long Saturday morning run. Two years earlier, A Muppet Family Christmas got good ratings, AND Jim was inducted into the Television Academy Hall of Fame, making it official that he was Awesome at Making TV Shows. And The Muppet Show had been one of the most popular shows in the world less than a decade earlier. But when this episode aired on May 15, 1989, people avoiding Jim Henson’s new show in droves.  What happened?

As a Henson fan, my natural impulse is to point a finger at the network. They must have done a bad job of marketing the show! That has to be the explanation! And honestly, I was just a kid when the show was on, but I don’t remember any of my friends or their parents talking about it.  (Although I swear I saw a commercial featuring an old man who sat down to watch the show and gradually got younger and younger as he laughed and marveled, ending with the tagline “The Jim Henson Hour: It’ll make you feel like a kid again!” But I’ve never seen this pop up on YouTube, and I’ve never met another Muppet fan who remembers it. So either it didn’t air very often, or it was all a dream.)

I’m sure we’ll talk about the whys of the show’s failure in a future installment, but we do have some proof of the fact that NBC wasn’t sure what to do with the show. The clip below, posted by YouTube user WozzaFraggle and recently brought to my attention by Tough Pigs’ own Kyle, shows Jim and Kermit promoting The Jim Henson Hour on The Today Show, where Jane Pauley lets it slip that she’s been told not to refer to the show as an anthology. But if it’s not an anthology, what it is? For anyone who gave it a fair shake, it’s a weird and funny and often remarkably entertaining television stew.  But for whatever reason, that fair shake just wasn’t shaking.

The official title of this fifth-aired episode is “First Show.”  This is not because the producers couldn’t count, but because this was in fact the first show taped. As this Jim Henson’s Red Book blog entry tells us, they started taping the episode in July 1988, including Jim’s host segments and the MuppeTelevision stuff, which featured Bobby McFerrin as the guest star. I was surprised to read in Jim Henson: The Biography that McFerrin was signed up as a guest star months before his song “Don’t Worry, Be Happy” became a huge hit. I was all prepared to do my incredulous “What was Jim thinking when he chose these little-known guest stars?!” schtick. But it turns out McFerrin had already won five Grammys by this time, so I guess Jim had plenty of reasons not to worry and to be happy about his guest star choice. 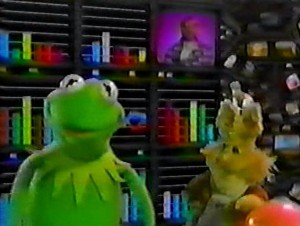 Here’s my advice to you: If you ever get a prime time network TV variety series, do not, under any circumstances, do an episode about your own show’s ratings. In the MuppeTelevision segment this week, Vicki introduces Kermit to Muppet Central’s new high-tech ratings tracking system, which allows them to monitor the interest level of viewers across all demographics, including Mr. Harry Stapleton (a great cameo by Jerry Nelson!).

But Mr. Stapleton may have been the only one who watched the whole show, as according to Jim Henson: The Biography, this episode ranked 72nd of 77 programs on television that week.  This despite Kermit’s promise that the show would contain “a lot of great, funny sketches, and songs, and… maybe some sex?”

(I know of one other TV show that did an episode about ratings, and that’s 1993’s The Paula Poundstone Show. What’s that? You didn’t know Paula Poundstone ever had her own prime time network TV variety series? EXACTLY.)

But it’s not like this is bad TV. Presumably Jim and the NBC suits held this one back for a reason instead of airing it first, but there’s a lot of good stuff here. I’d say it’s even better than the “Science Fiction” episode that they did show first.  There’s a gloriously violent nature documentary sketch involving military caterpillars shooting butterflies out of the sky. The alien yuppie drama “hurtingsomething” finds married couple Fern and Anthony repulsed by the sight of a human lawyer before cuddling with their gigantic, terrifying pet tarantula. Bobby McFerrin does a cool bit where he scats with wild-looking graffiti drawings that jump right off the wall, a fun and successful example of using technology to entertain in the Muppet manner. 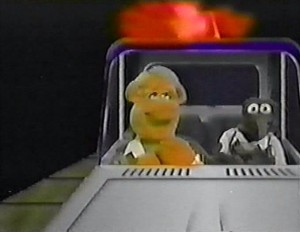 Speaking of a fun and successful example of using technology to entertain in the Muppet manner, the last sketch before the closing number is the cleverest use of the bluescreen set we’ve seen on the show so far. Vicki introduces the latest step in ratings-tracking tech: As soon as viewers get bored with a show, it morphs into a different genre of show that they’d rather be watching. Thus, Link finds himself thrown from a soap opera to a game show to a cop drama to a sci-fi show, as the show acknowledges the challenge of keeping an audience in a new era of channel-surfing.

For as much fun as all this is, though, Jim must have suspected that people would be disappointed not to see all their favorites from the old Muppet Show, despite the presence of Kermit and Gonzo (Okay, and Link.  Oh, and Lew Zealand, who makes a brief cameo in the closing number, playing timbales using fish as drumsticks!).  I wouldn’t be surprised if that’s why Miss Piggy’s Hollywood was chosen as the second half-hour for this Sunday-night gamble episode.

Miss Piggy’s Hollywood is the perfect way to get a good dose of the pig into the show.  The special finds Piggy attempting to give us a peek into the fabulous Hollywood scene, which she really, really wants us to believe she is a part of.  Gonzo is her producer, Fozzie provides a report from the Comedy Store, and George Wendt shows us his boxers.  Piggy tries so hard to be a glamorous showbiz insider, but it’s all a delusion that repeatedly falls apart, whether she’s getting caught planting a fake star for herself on the Walk of Fame or getting pushed into a swimming pool by Justine Bateman. 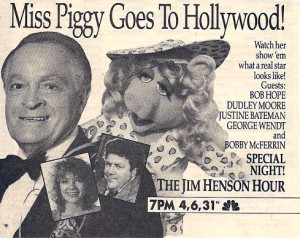 A handful of writers in the last couple of decades have forgotten to make Piggy sympathetic, but Bill Prady and Jim Lewis got it right here. If you ask me, Bill Prady should really give up that dead-end Big Bang Theory gig of his and go back to writing Miss Piggy specials. This one culminates in a scene at the home of Dudley Moore.  It starts out heartbreaking (Piggy admits her failure and cries in front of the camera), turns hilarious (Dudley Moore invites Piggy into his home, which is full of Piggy memorabilia), and almost gets too hot for TV (Moore and Piggy get up close and personal on his couch as he gazes into her eyes and confesses his desire to do something very special and intimate with her — singing a duet!).

A great first half, sketches that use technology effectively, and an entertaining second half starring the classic characters. The show must be on track now, right? Ah, if only. After this episode, NBC would wait almost two months before airing another one… and that one couldn’t have been what anyone was expecting or hoping for from the new TV show by the Muppet guy.

Click here to get pushed into a swimming pool by Justine Bateman on the Tough Pigs forum!