I know it’s cliché these days to write a “the Muppets are making comeback”-themed article, but I guess that’s pretty much what I’m going to do here. You’ve been warned… so you might want to stop reading if you hate the fact that the Muppets are popular right now. 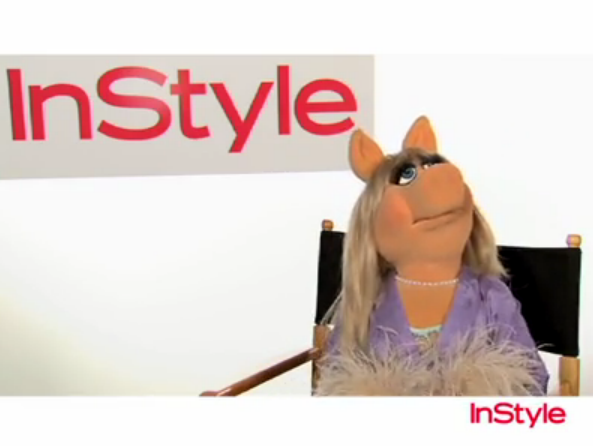 Back in the late 1970s and early 1980s, Miss Piggy was one of the biggest stars in the world.  And that is not even a cheap joke about her weight.  She was the breakout star of a ludicrously popular TV program, she appeared on talk shows, she wrote a book, she had a series of calendars.  I think it’s safe to say she was the most successful ungulate in show business, especially when you consider that Mr. Ed had long faded from the public consciousness by that point.

To everyone’s misfortune, however, Piggy hasn’t been nearly as ubiquitous for the last, oh, 25 years or so.  Sure, there was the occasional Baked Lays ad campaign or Dove “Real Beauty” commercial, but overall, the pig’s public appearances were few and far between for way too long.

All that has changed in recent months, as Disney has cranked up the volume on its marketing machine for The Muppets from Medium to Loud to Deafening.  Piggy is everywhere these days.  I can’t even imagine how sore Eric Jacobson’s arms must be from performing Piggy at New York’s Fashion’s Night Out, on The Tonight Show, on the Disney Channel’s So Random, and for various online videos.  Not to mention the upcoming appearances on WWE Raw, Project Runway All-Stars, and supposedly even Desperate Housewives, somehow, maybe.

Where else could she pop up?  How about the newest issue of In Style magazine, now available on newsstands?  I know there’s already a huge amount of overlap between In Style readers and Tough Pigs readers, but for those of you who may have forgotten, In Style is a periodical devoted to “fashion, beauty and celebrity lifestyle” news.  In other words, they’re the kind of publication with the guts to cover stories that the mainstream media allows to fall by the wayside.  If you spend a few minutes on their website, you’ll discover how Gwen Stefani chooses the perfect shade of lipstick, you’ll learn how to duplicate Lea Michele’s sexy bangs, and you’ll be granted access to THE ULTIMATE SHOE GUIDE.

What I’m saying is, this is an amazing magazine, and Piggy appearing it is a pretty big deal.  She gets a full-fledged photo spread, and good news for pig fans: She’s lookin’ fine.  These are new photos of a real Piggy poser, with none of the obvious PhotoShoppery that we’ve seen on the movie posters. Take a look: 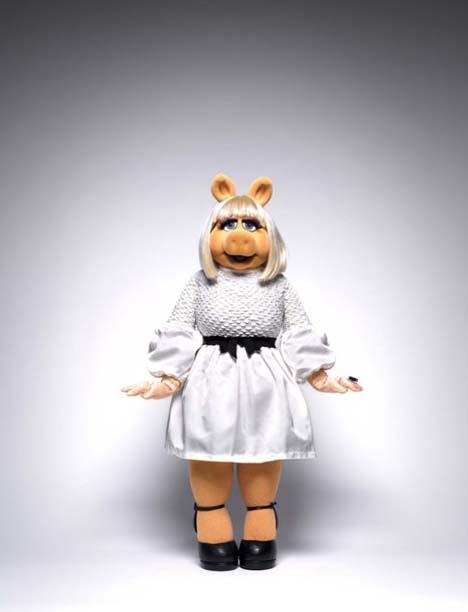 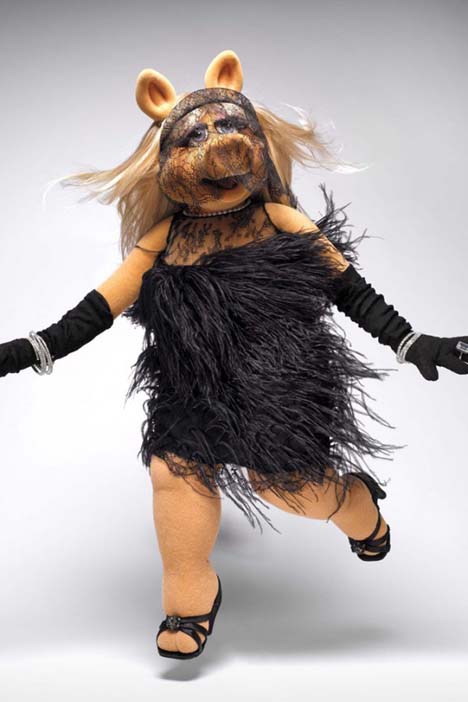 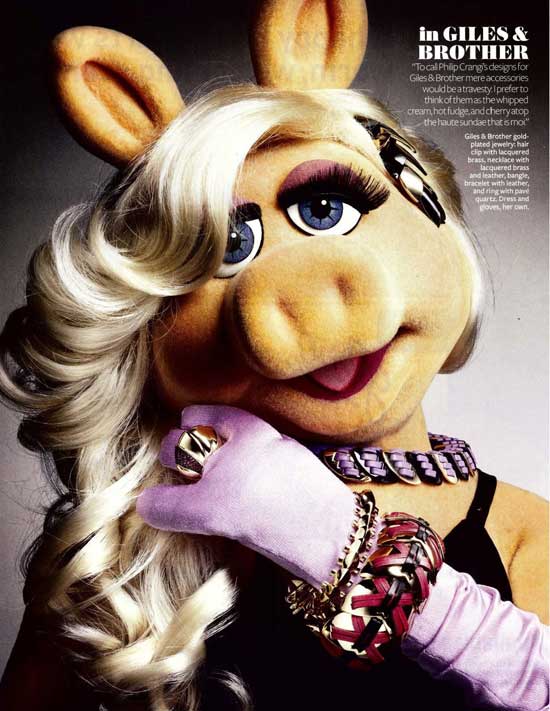 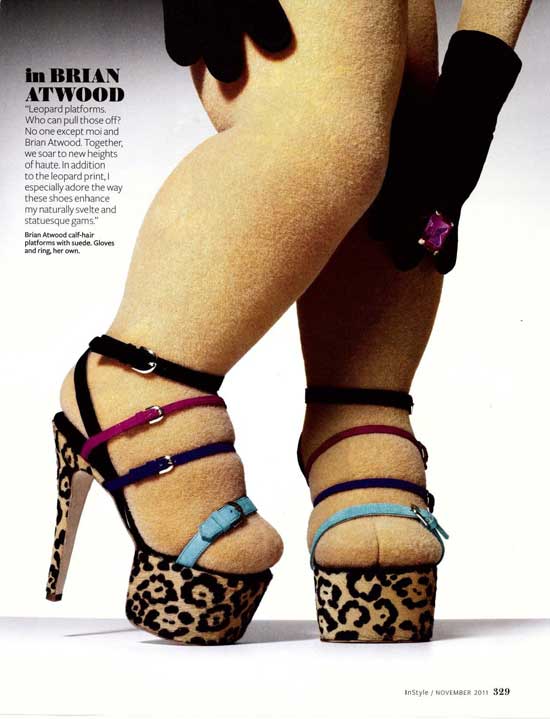 The captions are perfectly in-character, and I love that she’s modeling real designer clothing… If that doesn’t get people to buy those fashions, I don’t know what will.  Given our recent scrutiny of Gonzo’s toes, I can’t help but pay attention to Piggy’s toes here (My interest is purely academic, I swear!). She seems to have just two toes on each foot… I’m sure I’ve noticed that before, but it’s still quite fascinating.  I suppose it looks better than if she had hooves.

As if that weren’t enough, Piggy’s also featured in a video on In Style‘s Facebook page.  You have to have a Facebook account to see it, so if you’re one of that select group of 800 million people, you should be able to click this link right here to see Piggy talk about shoes, celebrity crushes, bling, and Lady Gaga.  So far 62 people have “liked” the video… Maybe you’ll love it so much you’ll be the 63rd!

It’s not just fashion designers who want Piggy to model their stuff… The cosmetics company MAC is also producing a limited edition Miss Piggy makeup line, which features eye shadow, eyeliner, and fake eyelashes.  They released this image along with their announcement: 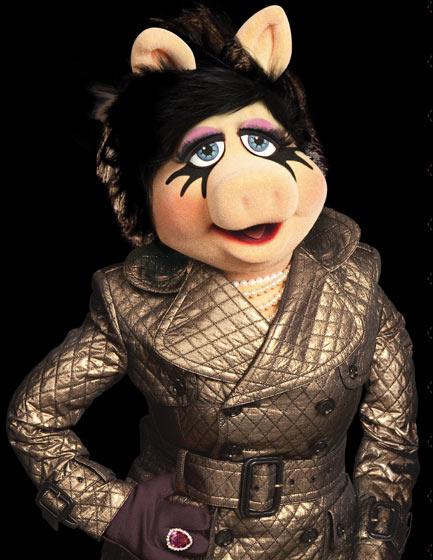 It’s a different look for her, but I think she makes it work.  Also, I predict that within the next few weeks every female celebrity will follow Piggy’s example and start wearing pearls with every single outfit.

For Piggy fans who like paper dolls but hate paper, there’s also a new game on Disney’s website called “Miss Piggy Photo Mashup,” which you can find right here.  I made this work of art: 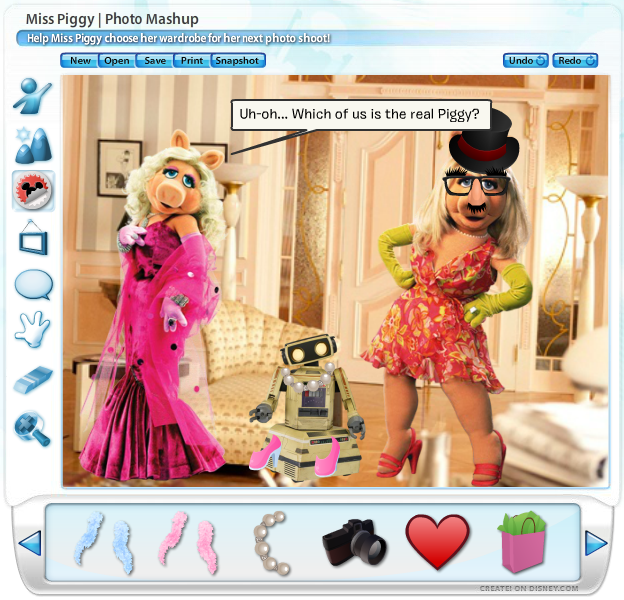 I thought I was pretty clever for coming up with the idea of putting two Piggys in the same picture, until I looked through some of the other user-submitted pictures and realized that everyone came up with that idea.  I think this entry (by user “rorylover76”) is my favorite, though: 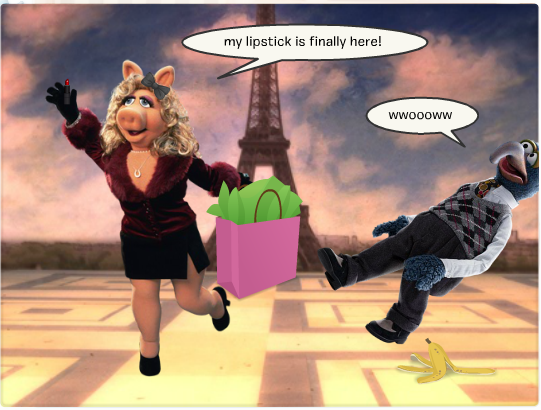 So… Piggy has a starring role in a major motion picture, numerous TV spots, a high-profile modeling gig, and a game on the internet where people can put a banana peel on her head if they feel like it. If I didn’t know any better, I’d say it was the late 70s all over again, except there wasn’t really an internet yet.  I mean, there sort of was, but it hadn’t yet advanced technologically to the point of being able to design new fashions for a pig puppet.  Anyway, the point is that this is a good time for the swine, and I can only hope she keeps it going even after the movie comes out. Who knows? Maybe she’ll finally get that Oscar nomination!

Some of the In Style scans above were stolen from IndieWire.  It would behoove you to click here to talk about Piggy on the Tough Pigs forum!