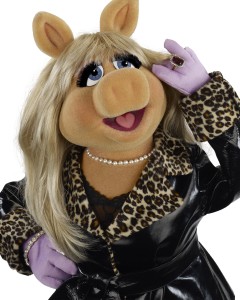 Man, Miss Piggy’s everywhere these days, isn’t she?  She’s in a parade at Disneyland, she’s on some show on the Disney Channel, she’s going to be on a professional wrestling show with her fellow Muppets… I even heard a rumor she’s going to take over for Andy Rooney on 60 Minutes.  And now comes another gig for the pig: Guest-judging on Project Runway All-Stars, which is a spinoff of Project Runway, which is some kind of fashion competition show that airs on Lifetime, which is a cable network for women.

Miss Piggy has long been one of Hollywood’s leading fashion icons, with several posters and calendars in her portfolio, so she’s definitely qualified to be a judge.  According to Reuters, the show’s new season begins on November 3rd, but no exact date is given for when Piggy’s appearance will air.  Presumably it will be before the release of her new movie on the 23rd, because if it came out after, what would be the point?

Click here to pass judgment on the Tough Pigs forum!