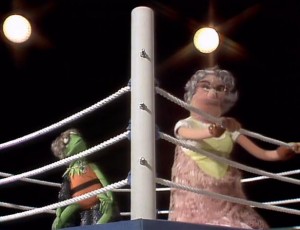 According to the website of the organization World Wrestling Entertainment), the Muppets will appear on the wrestling-based television program WWE Raw on Halloween.

You might not think there would be much overlap between Muppet fans and professional wrestling fans… and you’d probably be right, and that’s probably the point.  Apparently Disney wants every single demographic imaginable to know about the new movie, and guest-starring on Raw allows them access to a whole realm of potential movie ticket-buyers who presumably drink greater quantities of beer than the children who will see Miss Piggy’s guest appearance on So Random.

There’s no word on exactly what part the Muppets will play in the proceedings. It doesn’t seem likely that the core characters will be end up in the ring participating in any fights, but it would be pretty cool to see Sweetums smack some wrestler around, wouldn’t it?  The WWE announcement asks a few vital questions that I think are on everyone’s mind right now: “What will happen when Kermit the Frog meets The Viper? Will the Divas make Miss Piggy flip with jealousy? Will Beaker be confused for Sheamus?”  I must confess that I’ve never closely followed the WWE, so I can’t really guess at the answers to any of these, although I really, really hope the one about “the Viper” is a setup for a gag whose punchline involves a guy with a squeegee viping Kermit’s vindows.