Ernie. He knows how to dream big. The most remarkable thoughts he thinks have a way of being true. Ernie is the only candidate in this race who can mold reality to his will. Now he’s ready to take that large imagination and dedicate it to the United States of America. With his running mate Bert, he’ll do whatever it takes to lead this country into a bright and shining new era.

Ernie is a man of conviction. He can’t imagine anyone he’d rather be other than Ernie, and he’s known for seeing his plans through to the end, even if those around him can’t immediately see the value in his actions. He’s no self-absorbed fanatic, however. When he has to, Ernie is more than willing to put down the Duckie in favor of serving the greater good. As President, he’ll do what’s best for the people of the United States, not what’s best for himself. By the hilarious musical sting at the end of his first four years, he’ll have carried out big plans on these issues and more:

The Economy
Ernie hails from Sesame Street, and he knows how to cut government spending. He and Bert have shared an apartment for nearly forty years, and they haven’t spent a dime – not on food, not on utilities, and certainly not on earmarks. Also, both Ernie and his running mate have experience in helping workers see the value in their jobs. Ernie, during his stint as Old King Cole, showed his fiddlers three how to form a trio and Bert taught sheep how blankets are made. They’ll continue this commitment to the American worker from the White House.

Education
Education is not even an issue in this campaign, because my candidates are so far ahead of the other platform. They have a collective 78 years of experience in early childhood education, having dealt with subjects ranging from sharing to counting to keeping your room clean. Even with their decades of experience, they aren’t senile or out-of-touch. They’re veterans, but they’re as youthful – and as eager to help the children of America – today as they were in 1969. 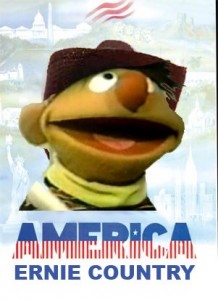 The Environment
Ernie is an avid gardener, and he and Bert have spent time on America’s farms, even briefly running one of their own. VP candidate Bert has shown a remarkable vigilance in aiding our feathered friends over the years, even teaching one special bird how to play checkers. They will ensure that our precious natural resources – both our flora and our fauna – get the love and attention they so richly deserve.

Foreign Policy
Ernie and Bert have real, tangible international experience. In their careers, they have adapted to dozens of different cultures – Egypt, The Netherlands, and Brazil, to name only a few. They’ve not only visited, they’ve taken the time to learn local language and customs fluently. This international focus doesn’t mean they’re light on homeland security. Ernie defeated a dragon – the ultimate terrorist – just by saying “Mr. Dragon, you better behave.” And the dragon was so scared of him that it ran away, and the Kingdom was free. Ernie’s simple, decisive tactics will keep this nation safe.

Health Care
Ernie has a unique solution to the current health care situation – instead of relying on insurance companies, the American people should learn to take better care of themselves and each other. He demonstrated how to care for a sick friend when Bert came down with a cold, and he taught Cookie Monster how to eat a healthy breakfast. We don’t need to wait until after something bad has happened, he says. We can prevent it from ever happening in the first place. With the help of President Ernie, we can get free of the suffocating gasp of insurance and breathe freely.

Immigration
As you may expect from a man with his experience in world travels, Ernie welcomes immigrants to Sesame Street, and he’d do the same for the nation at large. For decades, he has allowed a thriving community of Twiddlebugs to reside in his window sill. They live independently, according to their own cultural customs, but they enjoy all the rights and freedoms of any other Sesame Street resident. He’ll take your tired, your poor, your Twiddled masses, and welcome them with open arms.

Space Travel
As he has stated many times, Ernie would like to visit the moon on a rocketship high in the air. Outer space – the real outer space, not his opponent’s cockamamie name for the Earth – is this nation’s future, and Ernie knows it. He knows that commercial space travel is the next logical step in this country’s development, and he won’t stop until someone like himself with no formal training can easily take that trip.

Ernie. He’ll spend all day developing innovative ways to attack this nation’s problems head-on, and he’ll keep his vice president up all night if that’s what it takes to see them through to completion. Can we afford anything less? 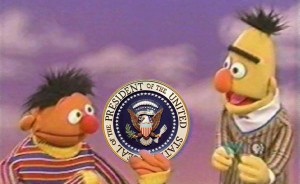 Click here to imagine an Ernie presidency on the Tough Pigs Forum!