Let’s get this straight: I love comic books. Not just the Muppet comics, but all comics. I love Superman and Uncle Scrooge and She-Hulk and Detective Chimp. And every year, I put on my finest Aquaman t-shirt and head out to the New York Comic Con to join thousands of other geeks, nerds, and fanboys (and girls!) for three days of unabashed obsession over our favorite funnybooks.

This year’s Comic Con was the first since BOOM Studios and Archaia Comics started publishing the Muppet and Fraggle books, so we decided to go the extra length and meet some of these people that are currently creating the only new Muppet material out there. We had a lot of fun and even encountered a few surprises!

The Archaia booth had a table just for Fraggle Rock writers and illustrators. Among the ones I was able to meet were Tim Beedle, Grace Randolph, Nichol Ashworth, Neil Kleid, Sam Humphries, and letterer Dave Lanphear. Every one of them had a ton of enthusiasm for Fraggle Rock, and I don’t think it was just because they were shilling the new hardcover collection. Even though we’ve interviewed most of them via e-mail here on ToughPigs, hearing them talk about their passion for the Rock is more than enough to make me yearn for volume two. 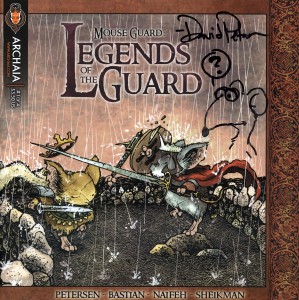 Also at Archaia was Muppet comics cover artists (and upcoming Fraggle Rock writer/artist) David Petersen. I probably shouldn’t be saying this on a public forum, but when David and I met, harsh words were exchanged and we came pretty close to an all-out fist fight. But before fisticuffs ensued, we set some ground rules: No punching (David’s career is dependent on the preservation of his hands), no hitting in the face (my career is dependent on the fact that I’m so good lookin’), no hitting below the belt (see previous comment), and no attack mice. By the time we realized that our fight rules only allowed us to give each other back massages, we completely forgot what we were fighting over. So David drew a picture of Rizzo for me and I was on my merry way. 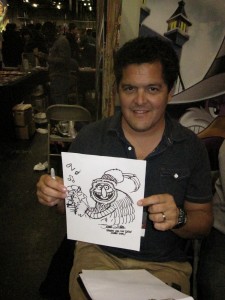 Right across the aisle from Archaia was the BOOM Studios booth. They were so close, the Fraggles could spit on the Muppets. Artist James Silvani, the chap responsible for 3/4 of Muppet King Arthur, was stationed there to sign copies of his current project: Darkwing Duck. Of course, I had to ask for a quick sketch, and James drew me a totally groovy Dr. Teeth. It was very mellow and profitable (though not really either of those things).

Sitting next to James was Jesse Blaze Snider, writer of the fantastic Muppet Snow White. From our Q&A with Jesse, we knew he was an excitable guy with a deep love and respect for the Muppets. But you don’t really get the scope of it until you meet him. Jesse and I talked at length about Kermit’s role as the “everyman”, the under-representation of Big Mean Carl, the difference between the Muppets telling a story and failing to tell a story, and what exactly Muppet fans want to read. Jesse’s pure enthusiasm blew me away, and I can’t help but think that there aren’t many guys like this who would be as perfect for his job as him. Here’s hoping Jesse starts work on a new Muppet project soon!

The final BOOM representative was the way-too-talented Amy Mebberson. Amy was busy doing sketches for Con attendees of dozens of Muppets, including some interesting variants like Green Lantern Kermit, Skeeter the Vampire Slayer, Lady Gaga Piggy, and Sam the Eagle as Captain America. She was kind enough to show me what she was working on every time I passed by, and she even drew a stunning Miss Piggy for me. We are so lucky to have a talent like Amy Mebberson working on our very favorite property. In an imperfect world, she’d be working for, I dunno, Topo Gigio or something. 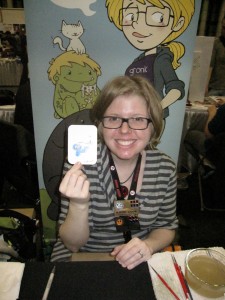 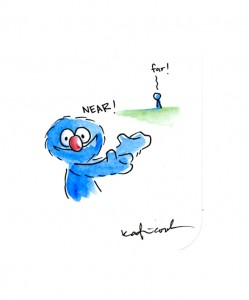 Camped out in Artists Alley (where the artists set up booths to sell their own sketches) was one of our favorites, Katie Cook. Katie’s table was covered in adorable drawings of cats as Marvel supervillains and mini paintings of Star Wars characters. I was very much looking forward to meeting Katie since she was the first artist we gave a spotlight to on ToughPigs who eventually got hired to draw Muppets. So yes, we totally take credit for her awesome success. But really, we’re thankful to have someone with her unique style working on Fraggle Rock. We’re all the better for it, including the Fraggles.

Aside from the booths, Comic Con also had panel discussions and screenings for the attendees. There were only three of note that had the potential to involve something Muppety. The first was Archaia’s All-Ages panel. Much of the panel consisted of David Petersen’s Mouse Guard and a new graphic novel called “Return of the Dapper Men”, and then Tim Beedle spoke briefly about Fraggle Rock v.2. They shared some sample art, including some beautiful pages from Grace Randolph’s lead story (which was described as “Fraggles meet Inception”). The miniseries will once again be 3 issues long and will continue in the anthology format. The best (potential) news was that Archaia is trying to convince Karen Prell to write a story for volume 3. C’mon Archaia, let’s make that happen!

They also talked about the upcoming Dark Crystal miniseries, which is “progressing slow and steady”. That’s partially due to the fact that Brian Froud is working hard on cover art, designing new characters, and overseeing the story. The plot, by the way, is a prequel to the movie, and will be “creating the myth of the world of Dark Crystal.” Sounds intriguing! I am officially intrigued.

Immediately after the Archaia panel was the BOOM panel (boy, they sure like being right next to each other), and we learned just about nothing. In my notes, I have one thing written down: “Mark Waid likes my shirt”. So yeah, Mark Waid told me that my shirt was cool. That guy is awesome. 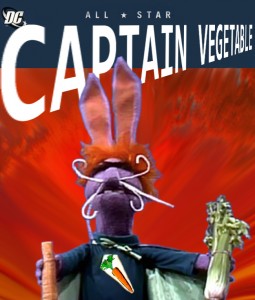 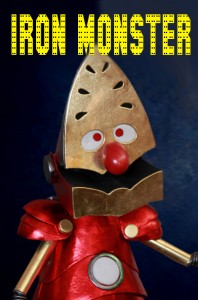 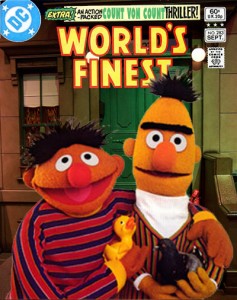 We have a little Comic Con tradition in our household where we make our own nerdy t-shirts to wear at the Con. Normally we opt for something comic booky, but since we were officially representing ToughPigs this year, we decided to go for something that toed the line between Muppets and comics. So in case you were wondering what Mark Waid was complimenting, it was one of the designs above.

The final panel of the day was “A Celebration of Childhood TV Memories” presented by Toonseum. The panel consisted of Jim Martin (Gary Gnu), David Newell (Mr. McFeely), Judy Sladky (Alice Snuffleupagus), Noel MacNeal (Bear), Noel’s son Maddy (he’s the short one), and the one and only Caroll Spinney (c’mon, you know this guy). We got to listen to these kids TV legends talk about how they get their start in television, Judy Sladky’s influence on the winter olympics, Noel MacNeal’s brush with death on the set of Follow That Bird, David Newell meeting Margaret Hamilton, and Jim Martin’s creation of Gary Gnu. The panel was a real blast, and I will never get tired of listening to Caroll Spinney talk about his craft. And it was great to see something as innocent as Sesame Street in the middle of the geeky chaos of Comic Con. Somehow it seemed appropriate.

And before you can say “Mr. Myxzptlk”, the Con was over. It felt like we were there for a week, but at the same time, like it was over in The Flash a flash. Many thanks to all of the awesomely talented people we got to meet this weekend, to marketing gurus Mel and Ivan and Chip at Archaia and BOOM, to those few ToughPigs readers who found us in the crowd and said hi (and to all of you who kept an eye out for us and missed us), and to Jerry Siegel and Joe Schuster, without whom we would be reading, I dunno, cookbooks or something.

Oh, and one last thing. Keep an eye on ToughPigs in the next few days when we’ll have some video treats for you! We’ve got lots of live interviews to keep you entertained and informed, including one with the great Caroll Spinney! 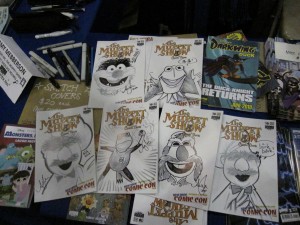 Click here to shout “Excelsior!” at the ToughPigs forum!