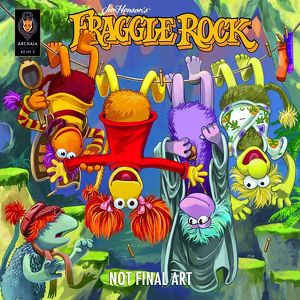 So, when you write a story for a Fraggle Rock comic, you basically have two options. You can attempt to create a story that feels like an episode of the show, with characters learning valuable life lessons and/or social commentary, or you can just have fun. The second issue of Archaia Comics’ Fraggle Rock, which will be in comic shops on Wednesday, May 26, contains three stories, and they each approach the task differently.

First up is “A Visitor From Outer Space,” written by Leigh Dragoon and drawn by Jake Myler. This story answers a question I had after reading the first issue, namely, “When do we see Doc in the comic?” Doc sets things in motion here when he brings home a stray cat he found. The cat gets spooked by Sprocket and runs through the hole in the wall that leads to Fraggle Rock. There’s really not much to this story… The Fraggles encounter the cat, they don’t know what it is, they’re scared of it at first, but then they decide to help it get home. 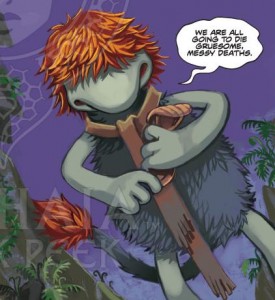 This story leans more toward the “just have fun” side, and it works fine. There are no surprises, but each Fraggle gets good “screen time,” and the art compliments the script really well. I especially like the way Jake Myler draws the cat, and some of Red and Boober’s facial expressions. I guess it’s probably tricky to draw Fraggles making faces because the actual puppets are so simple, but these Fraggles are perfectly believable. I was concerned for a second that one of the Fraggles besides Gobo was going to run out into Doc’s workshop, which just didn’t seem right… but then it didn’t happen so I breathed a sigh of Fraggle-geek relief.

The second story in the issue is “Different Tastes,” by Adrienne Ambrose with art by Joanna Estep, and it’s the comic’s first postcard from Gobo’s Uncle Traveling Matt. It captures the Traveling Matt vibe pretty successfully, and while it involves a modern-day device, I’m glad Ambrose resisted any temptation to show Matt doing something aggressively 21st-century, like visiting an internet cafe or going to a foam party. To say much else would pretty much give away the whole thing, but I will point out that I love that Matt is depicted as left-handed, as Muppets so often are. 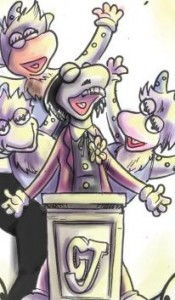 Finally, there’s “The Convincing of Convincing John,” by Neil Kleid and Fernando Pinto, which takes the bold step of giving that character an origin story. Of the three “episodes” in this comic, this is the one that most seems to aim for recreating the feeling of the show. Wembley learns a lesson — how to handle his stage fright — and Convincing John even sings new lyrics to his signature song from the show. In that way, I guess this story is in the same neighborhood as Roger Langridge’s Muppet Show Comic Book, in that Kleid isn’t about to let the fact that musical numbers don’t really work in print stop him from doing one anyway.

So it’s all right, and Pinto does an admirable job of translating John’s funny-looking visage to the page. Still, I don’t know that we really needed to know how Convincing John became convincing, and now that I look back over it, the whole thing would have been just as effective if it were a page or two shorter.

The issue wraps up with another cute activity page by Katie Cook, as Mokey teaches us how to make Doozer stick structures. There should be a disclaimer here: DO NOT EAT THESE DOOZER TOWERS, considering they’re made with salt water and toothpicks.

Nobody will ever produce Fraggle stories as good as those original 96 TV episodes, but Archaia’s teams of writers and artists are turning out some pretty pleasant Fraggle comics. If I knew any children, I would like to give them a copy of this comic, as it would probably pique their interest in both comic books and Fraggles, and that can only be a good thing.

Click here to tell it, sell it, spell it on the Tough Pigs forum!