Wow, what an exciting week! Not only did the new Muppet movie trailer leak, but… well, do you really need anything else to excite your week??

The trailer looks fantastic, as you can see for yourself. Just click on that little “play” button down there and watch the thing. Or watch it twice. Or, if you’re like me, set it up on an infinite loop through your subconscious.

Fantastic, ammiright?? And now, because we’ve got so much to say about so little, it’s time to over-analyze the parts we haven’t seen before. For more, be sure to check out our analyses of the “Green With Envy“, “Fuzzy Pack“, and “Being Green” trailers! 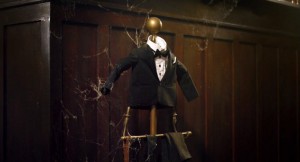 One of the first images we’re privy to is this one, of a tiny tuxedo on display. But I wonder, whose tux is it? If it was a Muppet Show reference, then wouldn’t it be purple? And who is so prominent that they’d have their tuxedo preserved like this? I have a theory, which is somewhere later in this article. If I remember to type it. 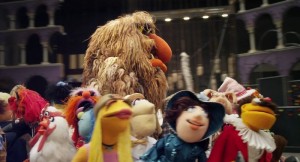 I really like this wraparound shot (well done, James Bobin). But one of the interesting parts of it is that we can clearly see Wayne and Wanda here, amongst the better-known Muppet characters. Will they be getting their own B-plot? Will Kermit reference the fact that he fired them after season 1? But most importantly, will they get to start and abandon a song after something goes horribly wrong?? 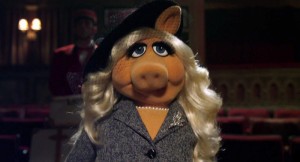 Some folks on the ToughPigs forum have noted the fact that Miss Piggy’s wardrobe is looking pretty fantastic in this movie. I’m kinda hoping for Miss Piggy to pull an “Evita” and go through a hundred different costume changes throughout the film. 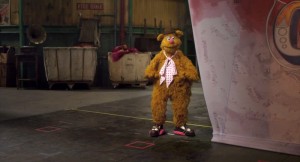 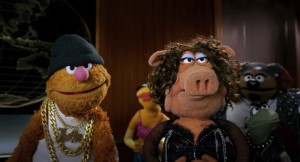 I have no idea what’s going on in this scene, but Fozzie and Rowlf are looking positively terrifying. Did they get all thugged up to ransack the bad guy’s hideout? Or are these some clever, thick-eyebrowed doppelgangers of our heroes?? And do you think Fozzie can make it without making a “Waka Flocka” joke? (Also, note that Fozzie’s necklace says “Foozie”. That’s not his name! That’s not his name at all!) 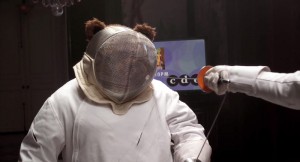 Man, I love Bobo. I’m so glad he’s in this movie. And I’m glad he seems to be working with the bad guys. He makes a great henchman. Henchbear. 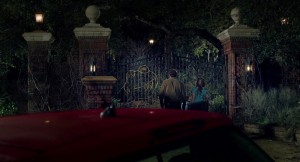 Looking closely at the fence, it looks like both Kermit and Piggy’s heads are etched into the bars. Did the happy couple actually live together before going their separate ways? And was it really necessary to electrify their fence? I mean, really. 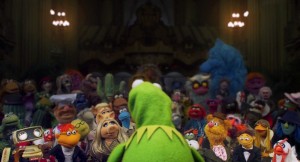 Ooh, look at this group scene. How beautiful is that? And it’s got an interesting mix of old and new, familiar and obscure characters. For every Scooter, there’s an Afghan Hound. For every Zoot, there’s a Mo Frackle. For every Cactus, there’s a Mutation. Even Pepe and Rizzo made it (despite fears that they might be left out of the movie). And it seems that this will be Kermit’s big “I believe in you” scene, pretty much guaranteeing some free-flowing tears from all of us. 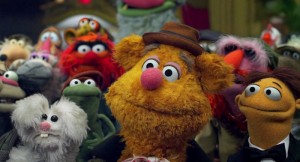 Fozzie’s eyebrows are looking a little gray here (normally, they’re dark brown). Do you think something traumatic happened to him that’s making him go prematurely gray?? Actually, it’s not all that premature; the bear is in his mid-thirties. 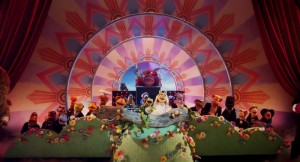 We’ve got a slightly wider view of this shot in the new trailer. One thing we didn’t notice before was that the Newsman is way off to the left there. I wonder if this is the first time he’s ever been asked to participate in a big Muppet sing-along. And if so, does that mean it has to end with something heavy falling on his head? 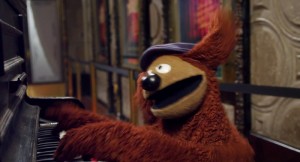 I don’t have much to add to this other than: I really like Rowlf’s hat. 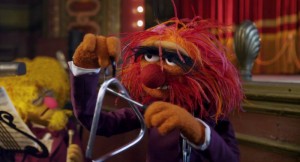 Animal’s playing the triangle, most likely referencing his background plot of trying to be less frantic and a little more serene. I’m calling it now: This will be the most predictable storyline in the entire movie. 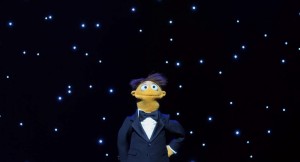 Boy, that tux sure does look familiar! Could it be the tuxedo from that first picture above??? 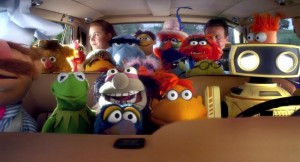 Gonzo sure looks uncomfortable in this shot (is he riding in the glove compartment??). I was thinking back to The Muppet Movie, and how they kept cramming characters into Fozzie’s car. It looks like all of the main Muppet Movie characters are here (except Piggy, who is probably missing for plot-related reasons, and Rowlf, who probably should be there), as well as favorites Sam the Eagle and Swedish Chef. But why is Crazy Harry there? I’m a little excited to find out. And who’s that designated driver? He looks like a mixture of R.O.B. and WALL-E. (Cue the Disney cross promotion jokes.) 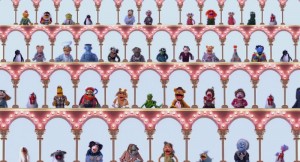 Wow, didn’t expect to see this! Look at all the characters! Manha Manha! Marvin Suggs! Old ladies! Frackles! Link and Strangepork in their Pigs in Space outfits! This feels so dang epic (despite the empty arches in the top row… I wonder if that was done on purpose). Someone on our forum also suggested that the reason we saw rebuilt characters like Thog and the Mutations may be because they’ll be used in a recreation of The Muppet Show opening sequence. I think I just had a geek stroke! 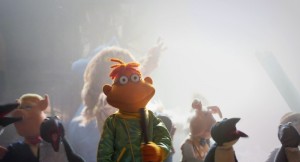 I will be the first to admit, I love “We Built This City”. It’s fun and terrible and catchy, and I’m really glad to see that the Muppets will be performing it. But I hope we don’t fall into a Muppets From Space situation with lip syncing popular songs in lieu of originals. I’d much rather hear Scooter’s rendition (with backup penguins, of course).

Honestly, if you’re not foaming at the mouth with anticipation for this movie, then you must not be a human being with human emotions. Because even greater than the confirmation of all these characters, plot points, and fun times, you should be just as excited as us that this new Muppet movie actually looks (dare I say?) good! Sweet merciful Frog, does it look good!

Thanks to the Muppet Wiki for providing all the images used in this article!

Click here to build this city on rock and roll on the ToughPigs forum!