So did you see the news item here on ToughPigs.com about the second teaser trailer for The Muppets? Much like the first trailer released earlier this week (Was it just this week? It seems longer. Do we really have to wait 179 more days to see this movie?), this one is not immediately recognizable as a Muppet film. Watch this:

But where the earlier preview appeared to be for a pretty generic-looking romantic comedy, this new one is going for something very specific. Take a look at the teaser trailer for The Hangover Part II that showed up in theaters months ago:

Basically, they took some footage from The Muppets and cut it to make a nearly shot-for-shot take-off of the Hangover trailer, but without the drunkenness.

I want to talk about what this means in the big picture, but first, some points of interest: 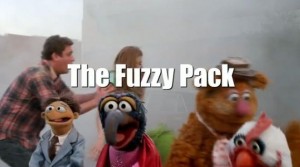 So overall, “The Fuzzy Pack” is not quite as thrilling for Muppet fans as the earlier trailer, but I think it has the potential to be even more effective at grabbing the attention of the movie fans who might not be able to identify Lew Zealand by name, but who would still be interested in seeing a Muppet movie.

It’s been about three years(!) since we first heard about this project, which was formerly known as So, That Guy Jason Segel Is Writing a Muppet Movie. That’s given us time to speculate about pretty much every aspect of it, including the marketing. Would Disney’s advertising campaign for the movie be dumbed-down, aimed straight at children with no effort to appeal to grown-ups? This would be terrible, of course, as all children are known to only enjoy dumb things, while all grown-ups only enjoy clever, sophisticated entertainment. Assuming the movie was good, would the ads accurately represent it, or would they only show the stupidest jokes, as so many trailers seem to?

Or worse: Would Disney even spend any money on advertising the movie, or would they let it drop into theaters quietly without telling anyone, ensuring that the only people who show up would be those of us who own multiple Bunsen Honeydew toys, which is a very limited demographic? 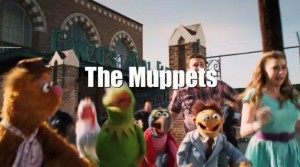 And now, six whole months before the movie opens, we already have an answer: Disney is not messing around with this Muppet movie.

Not only did they post the Green With Envy and Fuzzy Pack trailers on YouTube, they started Facebook pages for both fake movies (As of this writing, Envy has 6,504 likes and Fuzzy has 659). And it’s significant that they chose the romantic comedy genre and The Hangover as the subjects of these spoofs. The audiences for those movies are adults, not kids, which means they’re confident that the movie will be entertaining to all kinds of audience members of all ages. And it means Disney’s hopes for this movie as a kind of ’68 Comeback Special for the Muppets and their film career are as high as ours.

These trailers have gotten people talking, which is exactly what they were designed to do, and so far the response from the citizens of Internet-town has been mostly very enthusiastic, with only a few skeptics (and just a sprinkling of confused “Why isn’t the Count in this movie?”-type comments).

There’s still plenty of time until the movie is released, so I can’t wait to see if we get any more of these things. Will there be one that looks like an action movie? Or one that fools us into thinking it’s for The Hobbit? Or will they just skip straight to the actual, straightforward movie trailer? Only time will tell! Well, time and YouTube. And Facebook. Time and YouTube and Facebook will tell.

Click here to look for the Chef’s hat on the Tough Pigs forum!