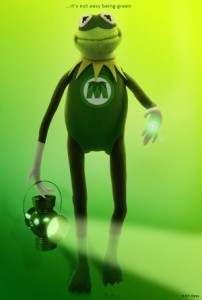 So, I’m about to write several hundred words about a one-minute teaser trailer for a movie that won’t be out for another 158 days. Every time I do something like this, I wonder if I’ve finally gone too far; if applying this kind of scrutiny to something so brief is actually too geeky.

And then I watch the trailer again, and I get all giddy about it all over again, and I realize there are lots of fans out there doing the same thing, so here we are.

In case you missed it earlier today, here’s the latest teaser trailer for The Muppets, the new Muppet movie with the shortest title ever.

And here are the things I have to say about it.

* The Green Lantern fakeout is amusing, but even more amusing are all the comments on the YouTube video that are some variation of “This movie looks so much better than the Green Lantern movie!” Yeah, I bet Ryan Reynolds wishes he were in The Muppets! Wait… Is he in it? I honestly can’t remember who is and who isn’t in this thing.

* I like Piggy’s hats! Miss Piggy is looking better overall than she has in years, but as a person who cares about the hats worn by a pig puppet in a movie, I like the ones we see here. This one is stylish: 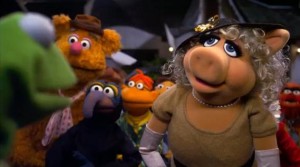 And, as some folks on the Tough Pigs forum have noted, this one recalls Muppets Take Manhattan Piggy: 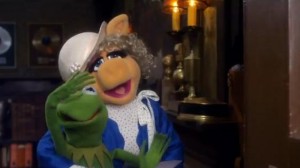 * In the previously-released trailers, we caught fleeting glimpses of some characters we never used to think we’d never see again, like Marvin Suggs, Droop, and Thog. And now here’s another one: Wayne! 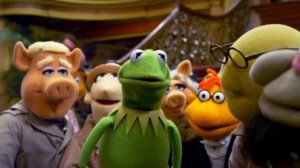 * At this point, I would only be 13.5% surprised to see Hilda show up in this movie. What I really want to know is, Who’s responsible for bringing back all these Muppets? The puppet builders? The puppeteers? Or could it be the creative team? We’ve heard Jason Segel and Nick Stoller and James Bobin talk about what big fans they are, but are they really such tremendous geeks that at some point in the production process one of them said, “Hey, you know who we should put in this movie? Wayne from The Muppet Show!”And of course, now our biggest reason for wanting to see the next trailer is so we can find out if Wanda made the cut.

* We have our first look at Chris Cooper as the film’s villain, Tex Richman. He seems pretty mean — and he has some cronies: 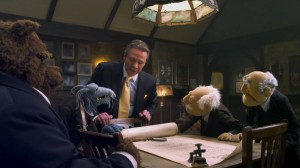 * It looks like Bobo has managed to get himself hired by the bad guy again, just like in Muppets From Space and Letters to Santa (Okay, Nathan Lane wasn’t really a bad guy, but he was totally uptight). I’m happy to see that Bobo will make some kind of appearance in this movie… I know the filmmakers have talked about how devoted they are to making it old skool, but Bobo’s a really funny character, and he’s been part of the Muppet family for a decade and a half, even if most moviegoers have no idea who he is.

And then there’s Statler and Waldorf… Ooh, are they conspiring with Richman to demolish the Muppet Theater? They’ve never really been presented as villainous before, but it could be fun.

Oh, and see that old, official-looking document on the table there? In the closer shot you can read the words “The Standard” on top of it. Which has led to some speculation on our forum that it’s the “Standard Rich and Famous Contract” Kermit and the gang signed with Lew Lord at the end of The Muppet Movie. If that’s true, it would be an unusual nod to continuity for the Muppets. And I’m sure Richman is up to no good with it.

* Did you notice the editing trickery when Jason Segel says “Wait, wait wait — stop”? You see him say that line, but then when he says “Is this another Muppet trailer parody? Why don’t we just show a real trailer?!” it cuts to the Muppets and Amy Adams reacting, which would indicate that the last part was recorded much more recently. 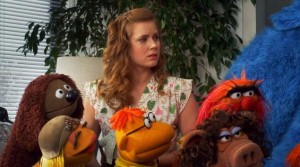 * Clever! I’m actually halfway wondering if Kermit’s “I had something in my throat” line at the beginning was looped-in as well. It would be pretty easy to do that with a Muppet.

* The bit I’m most curious about is this one: 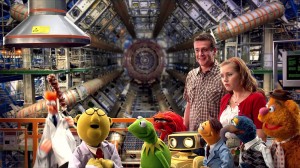 That is one crazy background behind them there. I’m guessing this is from the part of the movie in which Gary, Mary, and Walter go around finding the scattered Muppets and bringing them back together. But are Bunsen and Beaker working at the Large Hadron Collider? And is Beaker cleaning it with a toilet brush?

* Here’s one more cool thing, but I can’t claim responsibility for noticing it… It was posted on the Muppet Wiki by user MuppetDanny. In Chris Cooper’s close-up, there’s a photo hanging on the wall in the background that appears to include a familiar face: 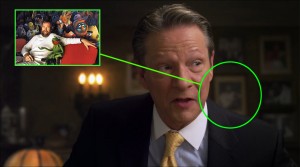 So when’s the full-length trailer coming out already? Well, one website has posted what purports to be a press release in which Kermit the Frog announces that the “official” trailer will be available next Monday at 8:00 AM Pacific time… but no other sites seem to be reporting that, so who knows?

But it’s gotta be soon! There’s no way Disney would let the summer movie season slip away without giving us more to get excited about. They’re going to make sure everyone wants to see this movie… Even if it doesn’t have any computer-animated aliens fighting each other in space. 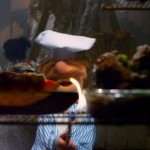 Click here to express your relief that the movie is not in Swedish — unless you speak Swedish! — on the Tough Pigs forum!