Ladies and gentlemen, frogs and pigs, welcome once again to the Tough Pigs April Fools tradition:

When TP pal John Hamilton sent in his votes for this year’s Pageant, he said, “I often worry that Muppets’ souls are trapped in these ugly toys.”

Now, he was talking about the huge Kermit doll that looks like it’s about to eat the toddler, but in the bigger picture, that’s a good way to describe the eerie specter that is the Ugly Muppet Toy. In the comments that follow, you’ll notice that on the whole people refer to an ugly toy as “him,” rather than “it.”

The ugly toys have souls. And some of those souls are very, very dark.

And, speaking of dark: To present the Pageant rules, we’ve got that unearthly trio, the homemade baby-head Sesame dolls. Take it away, kids!

Over the last two weeks, the Ugly Toy contestants were appraised and rated by you, the Ugly Toy consuming community. People rated each toy on a scale of 1 to 5, with 1 being not that ugly and 5 being extreeeeemely ugly. On the next couple pages, we’ll count down the “winners,” starting with the Not That Ugly toys, and working up to the toys that have been voted by You, The People, as the ugliest toys of the year. Color commentary from the voters is provided for your entertainment.

Thank you, boys! And good luck getting into grad school.

“I actually like the look of these. It’s the taste that’s ugly.”
– Scott Hanson

“That’s a good likeness of Kermit… and you can eat it! What’s not to like?”
– Jonathan M

“Ugly, only from the perspective that eating jelly pops is like chewing the insole of an orthopedic shoe.”
– Jay Fosgitt

“Those eyes are a travesty, and a careless move by Palisades.”
– Scott Hanson

“He looks wooden and lifeless. The dummy doesn’t look too good either.”
– Tom Holste

“I think Fozzie’s trying to look at the dummy and the microphone, at the same time.”
– Joel Swanson

“He’s Steppin’ Out of the short bus.”
– Peter Papazoglou

“Hold on there, I have a Rock n Roll Ernie. If you could just hear him sing Splish Splash,
you’d fall in love with him.”
– Ryan Roe

“I could swear Kermit had a neck. Daphnie deserved a Kermit with a neck.”
– John Hamilton

“It’s not really that ugly. Daphnie, however, may be hideous.”
– Carolyn Wiesner

“At least their heart is in the right place.”
– Mike Cervantes

“Can you imagine being arrested by Elmo? Seriously. Just try to picture it.”
– Grant Harding

“Maybe someone will remove their feeding tube.”
– Mike Cervantes

“This one’s Elmo, that one’s Zoe. One is sucky, the other blow-y.”
– Chris Smigliano

“I guess anything goes in Japan.”
– Carolyn Wiesner

“Whatever the hell is in that juice container, there sure is a lot of it.”
– Kynan Barker

“This Kermit is only good for scaring small children, and smuggling commercial quantities of cocaine.”
– Kynan Barker

“Won’t somebody please think of the children!”
– Kellie Bartlett

“This isn’t ugly. It’s just from 2002, when Muppet fans were sucked into an alternate universe where we all had to pay attention to stockcar racing.”
– Kynan Barker

“Whatever you do, don’t feed them after midnight.”
– Tom Holste

“I’d love to eat you!”
“… But as a common barn owl, my diet consists primarily of moths and small rodents.”
– Kynan Barker

“He just got out of the dryer.”
– Mike Cervantes

“Why do most Animal dolls look like a Muppaphone with legs?”
– Mike Horner

“I’m constantly astonished that toymakers live in a world where Animal’s head is pink. It’s not pink! It’s never been pink. It’s red! It’s not like that’s particularly rare or something — it’s one of the primary fucking colors!”
– Kynan Barker

“Looks like they got halfway through designing this toy and just stopped.”
– Kellie Bartlett

“… Jay Leno, after being punched in the nose.”
– Jeremy Wilcox

“… Count Olaf, from A Series of Unfortunate Plush.”
– Kevin Williams

“… That old dude from the Six Flags commercial.”
– Jonathan M

“It’s not funny, he has a very serious thyroid disease.”
– John Hamilton

“He looks like he’s witnessing a murder.”
– Grant Harding

“Show us where the bad man touched you.”
– Isha Matos 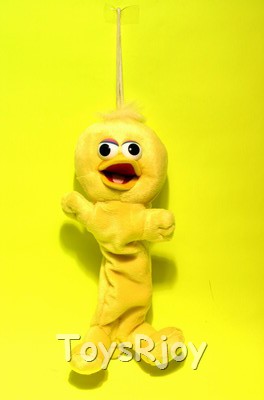 “I tawt I taw a Snuffleupagus!”
– Grant Harding

“Aw, I kinda wanna step on him.”
– Scott Hanson

“Weird coincidence — inside the Bird costume, that’s exactly what Caroll Spinney is shaped like.”
– Kynan Barker

“This is why Muppets shouldn’t drink when they’re pregnant.”
– Jay Fosgitt

How bad can it get? Click here for the winners!