“I am shocked and awed.”
— Michal Richardson

“Apparently the result of a Who Can Design an Oscar Doll the Fastest Contest.”
— Ryan DiGiorgi

“I like his style. Ghetto trash, yo!”
— Julian Kleibeler

“I must admit, I own this one and she is just as ugly in person.”
— Yancey Thrift

“Piggy’s sense of taste has been one of the most unfortunate casualties of the Muppets’ evolution.”
— Ryan DiGiorgi

“This is why you should always use sunscreen.”
— Justin Werfel

“This one should win. It’s biker-whore Piggy.”
— Jess Healey

The Ugliest Toy of the Year! 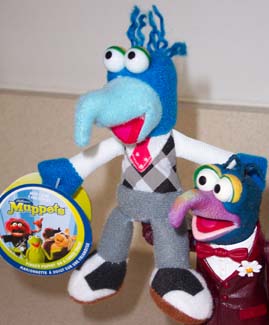 “Is the pretty Gonzo telling the ugly Gonzo to turn his head and cough?”
— David Beukema

“Too much caffeine!”
— Lucy Posen

“If the Muppets ever do PSA’s about not sticking things in electrical outlets… this is your man.”
— Emmy Miklasevich

So that wraps it up for this year’s Ugly Toy pageant! We’ll do the fourth annual pageant next year… unless, of course, there aren’t any ugly Muppet toys coming out this year for us to nominate.

But let’s face it, what are the odds? Same time next year!