Ladies and gentlemen, frogs and pigs, welcome once again to the Tough Pigs April Fools tradition:

Ugly Muppet toys hurt us, as naturally they would, and this is our annual chance to hurt back. That way, we can get it all out of our systems, so we’re ready to go back to our normal lives of shopping for Muppet toys. We need this once a year to blow off steam — like Mardi Gras, or a witch trial.

We assembled a mighty team of contestants this year — most of them critters just made in the last year or two. Tonight, we are proud and only slightly nauseated to present the startling results.

Here to present the rules for the evening is our glamorous presenter, the Mexican Piggy Doll. She might be a knockoff and she might not, but either way, she’s all Pig — and if she can hoist herself up off the couch for two seconds, she’ll explain tonight’s rules:

Over the last two weeks, the Ugly Toy contestants were appraised and rated by you, the Ugly Toy-consuming community. People rated each toy on a scale of 1 to 5, with 1 being not that ugly and 5 being extreeeeemely ugly. On the next couple pages, we’ll count down the “winners,” starting with the Not That Ugly toys, and working up to the toys that have been voted by You, The People, as the ugliest toys of the year. Color commentary from the voters is provided for your entertainment.

Thank you, Mexican Piggy Doll! You can, um, you can go now.

Seriously. Thank you. You can run along now.

“It must be Macarena Grover. Or is it part of a line of suggestively posed Muppets? I shudder to think what the Snuffleupagus would look like.”
— Ryan Roe

“He’s not ugly, he’s just having a little too much fun.”
— Carolyn Wiesner

“Poor Waldorf must not be very photogeriatric.”
— Mike Cervantes 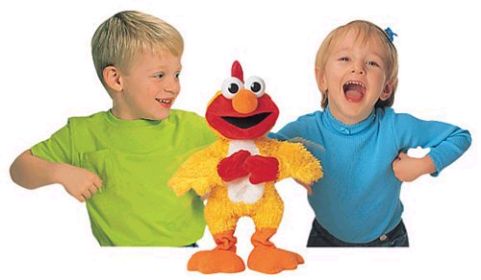 “The little boy tweaking his nipples freaks me out.”
— Quinn Rollins

“How can you hate this guy? Clearly, he’s the life of the party.”
— Ian Pugh

“Not really ugly. It just looks like she’s zoned out on Ritalin.”
— Ian Pugh

“On the whole, I wouldn’t recommend the Meg Ryan haircuts.”
— Michal Richardson

“As wrong as it looks, all bobble heads look like this.”
— Ryan DiGiorgi

“Now let’s all bobble our heads and pray.”
— Mike Cervantes

“I don’t watch Farscape, so I’m giving it the benefit of the doubt. The ugliness doubt, that is.”
— Ryan Roe

“Why does every Gonzo doll look like he’s just been electrocuted? (Then again, it’s Gonzo. Maybe he has.)”
— Tom Holste

“The Sababa boys try so hard. Let’s not discourage them.”
— Michal Richardson

“At least he looks useful for wiping up spills.”
— Justin Werfel

The other Fozzie Tuxedo toy
(Nanco, 2003)
sent in by Kevin Williams

“Poor guy looks like a tribble in a trenchcoat.”
— Mike Cervantes

“Either that’s a raisin in his navel, or yecch.”
— Ryan Roe

“Poor Fozzie. What has he done to piss off so many toy makers?”
— Emmy Miklasevich

“From the unreleased special: Statler and Waldorf: Gettin’ Jiggy With It ’03.”
— Tom Holste

“H to the eckle!”
— Michal Richardson

“Bert’s just realized that the calls are coming from inside the house!”
— Ryan DiGiorgi

“This is like attending Grampa Grover’s funeral. So sad.”
— Julian Kleibeler

“Awwww, I want it! I will adopt it and call it Nummy Muffin Coocle Butter.”
— David Beukema

“She’s just begging to have a house dropped on her.”
— Ryan Roe

“I saw Goodwife Piggy walking with the devil! I understand the people of Salem so much better now.”
— Michal Richardson

“Piggy does not respond well to the finger.”
— Mike Cervantes

“More depressing than anything.”
— Ian Pugh

“Oh snaps, someone at the beauty salon messed up while Piggy was getting her weave did! You fired, girl!”
— David Beukema

“He may have been cute before getting kicked.”
— Quinn Rollins

So who takes home the crown this year? Click here for the winners!