Ladies and gentlemen, frogs and pigs… as Muppet fans, we get hurt by ugly toys a lot. We buy these toys because we love them — or at least we love the characters that they sort of vaguely resemble — and then one day you turn around, and what have you got? No money in your pocket, and a shelf full of cross-eyed homonculi, most of which seem to be in carrot cars.

Well, the annual Ugly Toys Pageant is our chance to hurt back. Over the last two weeks, Tough Pigs readers have sat in judgement over 19 of the shadiest toys we could find, and rated each one on an Ugliness Scale of 1 to 5. And tonight… we reveal the Ugliest Muppet Toy of 2003.

This right here is the winner of last year’s pageant, here to pass his slightly soiled crown to the new champion. Over the next few pages, we’ll count down the “winners,” starting with the toys that are in fact Not That Ugly, and working our way up to the toys that have been voted by You, The People, as the ugliest toys. (On the scale, 1 is Not That Ugly and 5 is Extremely Ugly.) Color commentary from the voters is provided for your entertainment.

As always, protective eyewear should be worn at all times.

Not, Apparently, That Ugly

“This wouldn’t be so bad if it weren’t for the feet sticking out the front.”
— Isha May

“Cute Muppets on a crap non-Muppet toy. Why did gingham hubcaps never catch on?”
— Kynan Barker

“Both a vegetarian and an environmentalist, Kermit drives his Carrot car everywhere. Carrot car? The hell?”
— Lucy Posen

“Ugly rating: 1. What the fuck rating: 207. Why was this toy made? It makes no sense, not even in the context of Easter. The only possible explanation is that there was once a Muppet special called Kermit’s Magical Journey Through Bean Bunny’s Digestive Tract.”
— Mike Horner

“Looks like he waitin’ for a Fraggle to come along so he can jack ’em with a sock full of pennies.”
— Mark Pethick

“Not so bad. I think I’d have fun chewing on it, were I so inclined.”
— Michal

“Squeeze it… does it make a noise like ‘dweeeep’? Then it’s not so ugly anymore.”
— Kynan Barker

“Not that ugly, just tacky. (Only a true Muppet fan can distinguish between tacky and non-tacky Muppet merchandise.)”
— Mark Pethick

“Are we rating the bear or the Animal likeness on his shirt? Either way: another 3.”
— Tom Holste

“The world is coming to an end.”
— Mike Cervantes

“There’s something about Kermit’s posture and expression that make me uncomfortable.”
— Marian Bayusik

“This one gets a 3. Not so much because it’s ugly, but because it looks like a really stupid game.”
— Emmy Miklasevich

“As if this weren’t disturbing enough: Does the picture show that thing VIBRATING?”
— Michal

“Not ugly — adorable. But adorable in the Gary Coleman, Emmanuel Lewis way, where the first time you look, you go Awww, and the second time you go AAAH!”
— Kynan Barker 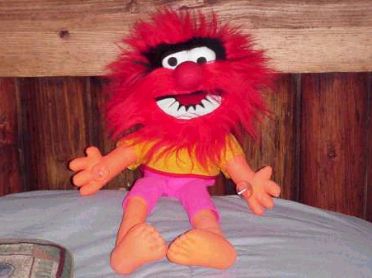 “Looks like Animal just got out of the dryer.”
— Carla Foss

“It looks bad as Animal, but could easily be remarketed as a Yosemite Sam doll.”
— Mark Pethick

“I know exactly where this is from, it’s Mexico’s Ebay. It’s been there for about two years now. No one has bought it all the time it’s been there.”
— Warrick Brownlow

“I think we just ran over Fozzie Bear.”
“I thought I heard something funny.”
— Mike Horner

“I actually have one, and I carry it around everywhere I go. Not out of love for the toy, but out of fear. I’m afraid that when I’m not looking, this toy will kill me.”
— Emmy Miklasevich

“This is apparently Drunken Street Person Fozzie, complete with bags under his eyes.”
— Isha May

“I think Kermit is choking on something.”
— Emmy Miklasevich

“Looks like Digit was doing squidgy things with his eyeballs.”
— R.D.

“Assuming that it’s not actually Big Bird, he looks like a goofy, fun character that I want to know better. I dub him… Bird McDoofington.”
— Dave Beukema

“Why are Count Dracula and Igor in this picture?”
— Tom Holste

“This is obviously from some late night French goth show.”
— Lucy Posen

“I don’t believe these are real… It just doesn’t make sense!”
— Zack Haumesser

“The challenge — and thus the educational value — of this toy is to try and guess which Muppets they’re intended to represent.”
— Kynan Barker

“Somehow ugly Animals don’t seem that ugly, perhaps because Animal’s not all that handsome to begin with.”
— Ryan Roe

“These German toys are kind of okay, in a Hello Kitty, aww, lookit the widdle freaks of nature way.”
— Kynan Barker

“I love when Rizzo wears that shirt, in all the numerous productions he’s worn it in.”
— Ryan Roe

“This one will haunt my dreams.”
— Jeremy Harper

“It looks more like a flamingo than Gonzo.”
— Emmy Miklasevich

“Why did that evil looking bird have to eat Gonzo?”
— Jake Barker

“It’s a good thing they labeled him, because otherwise we have no way to tell.”
— Michal

“Ugly, but in a rather cute way.”
— Helen Polson

Shield your eyes! Turn back now! Do not click here for the winners!