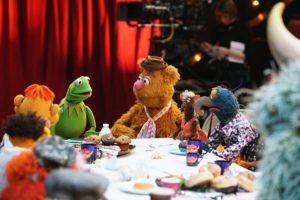 The Steve Whitmire/Disney story continues to develop. Early this morning, Steve posted an update to his blog in which he shared his views on the non-interchangeable nature of the Muppet characters.  Then, this afternoon, after Disney had released their statement on the matter, The Hollywood Reporter published an article featuring some new quotes they got from Steve.  In the article, Steve directly addresses the “two stated issues” he previously mentioned were cited by the Muppets Studio people when they informed him they would be recasting.  From the Reporter:

“The first issue was that they felt I had been ‘disrespectful’ in being outspoken on character issues with the small group of top creative people during the ABC series,” said Whitmire, who had been working with the Muppets since 1978. “I have been outspoken about what’s best for the Muppets since the Muppets came to Disney [2004], but the fact is I have respect for everyone who was involved in the creation of that series for their own particular contributions. At the same time, I also have insight into their limitations with respect to how well they know the Muppets.”

As for the second issue:

“The second issue was framed as ‘refusing to work on a particular project’ some 15 months earlier,” Whitmire explained. “I happened to get caught in the middle of a dispute on a contract classification between SAG-AFTRA and Disney Labor Relations, which occurred while I was in-flight to work on the project and the associated commercial. I did in fact shoot the commercial, but was unable to shoot the material for the project in order to comply with my obligations to the guild. Ironically, in that situation, my rep had negotiated a special deal with the guild so that we could do the work within the budget parameters for the project.”

Click here to read the full Hollywood Reporter piece, which also includes, by way of an example of Steve’s outspokenness, his critiques of the Muppets episode “Little Green Lie.” (That’s the one where Robin comes to visit and Kermit and Piggy pretend they’re still together for the little guy’s benefit.)

Click here to report on Hollywood on the Tough Pigs forum.