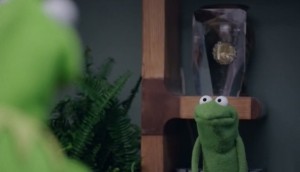 The latest episode of The Muppets is our fourth one since the series was retooled and it comes in our penultimate week of season one.  (There are two episodes left, airing back-to-back on March 1st.)  So we’re in that strange sweet-spot where the new showrunners have had enough time to insert their own voices in the show, but close enough to the end that we’ve got to start thinking about wrapping things up.

Part of the retooling involved bringing back some of what makes the Muppets great and had been missing from the first ten episodes.  But the tricky part is figuring out what that means.  As we’ve argued a few times in various ToughPigs articles, the Muppets mean so many different things to so many different people, it’s impossible to please everyone.  But when a change is gonna come, how will we know which voices to listen to?

In “Little Green Lie”, that question is asked by none other than Robin the Frog, who made his triumphant and tiny return to the Muppet troupe this week.  He’s not stuck in the past, but he’s being told that he is (by way of some trickery by Kermit and Miss Piggy), and that everything is just how you remember it.  You know, the good ol’ times.  Before everything was ruined or different and scary or not up to our expectations. 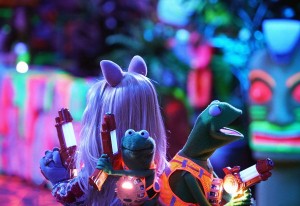 As cute as he is, Robin does not take to the truth so well.  He said, “I don’t like that everything’s changing” once Kermit and Piggy’s deception is revealed, and that was quite possibly the biggest complaint from the show’s nay-sayers.  It’s almost as if the Muppets aren’t allowed to grow and change like real people, and that we should expect them to always stay exactly where we left them in the ’80s.  But for Kermit and Piggy, that’s not a realistic way of seeing the world.  And for us, it would make for some pretty redundant storytelling, with the pair in relationship limbo for the past 40 years.

Kermit and Piggy comment on the public conversation too, asking “Why is everyone so obsessed with us getting back together?”  “Beats me, I don’t know if we’ll ever stop hearing about it.”  The question of when they’ll return to the status quo will always be the focus of their characters.  And if they do go back to being a couple, we’ll go back to hearing interviewers ask the same questions over and over about their relationship, because that is the rut that The Muppets has been trying to dig the franchise out of since it started. 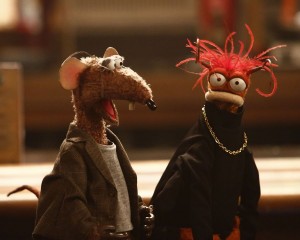 But one bit of fan service that paid off is getting Robin on our TVs again.  I loved the joke in Muppets Most Wanted when they referenced the fact that characters like Robin and Rizzo have been forced into the background to make room for everyone else.  But since Rizzo found his new role as one of the writers, Robin has been one of the few main characters left out of the series.  (Walter too, but that’s another article for another day.)  I loved seeing that little guy follow his Uncle Kermit around again, and Matt Vogel did an impressive job with his return.  Admittedly, I was a little thrown off for his first appearance due to my expectations of hearing Jerry Nelson’s voice, but that dissipated pretty quickly.  It helped that Matt added so much to the physical performance, having Robin act like a real kid, distracted by tchotchkes around Kermit’s office and putting his feet up on the desk and trying to eat hot wax.

“Little Green Lie” really did focus on the “little”, as the B-plot featured our other minuscule characters Pepe and Rizzo trying to get some.  Although this storyline had some great bits (notably seeing Sam, Carl, and Chip audition as their third wingman), it mostly fell flat for me.  Pepe is the show’s resident horndog, so it makes sense that he’d be terrible at picking up Good Morning America‘s Lara Spencer (another ABC show! Synergy!), but Rizzo is completely superfluous.  When Rizzo’s around Pepe, he becomes horndog #2, and when he’s around Gonzo, he becomes the weird, hungry rat.  He doesn’t have much of a personality when he’s on his own, and this storyline (as well as all of the other ones he’s been involved in) would run exactly the same if he wasn’t there.  It’s a shame too, because Rizzo has so much potential beyond being the sidekick to the sidekick.

A part of me wonders if the changes made on The Muppets were done in time, or if we’re going to spend the back end of the season making subtle meta messages about those changes.  But as Robin worried about losing what made his past great, the Muppets we know and love are still there for us.  As Kermit still assured him, “I’ll always be your Uncle Kermit.”  And Piggy will always be his “Aunt Miss Piggy”. 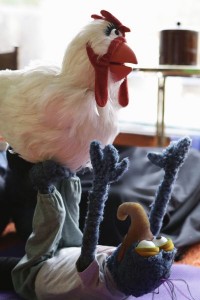 Best Joke: I had a lot to choose from.  Piggy’s “Robin’s divorced father’s head melted on his dashboard!?” got a big laugh out of me, as well as the Electric Mayhem’s guesses for ice cream (or as Uncle Deadly pronounced it, “iced cream”) flavors: Leather, spitachio, and WOMAN.

Best One-Liner: This category almost always goes to Uncle Deadly, doesn’t it?  His line reading of, “This is the third least important secret I’m currently keeping,” along with his creepy slink away from Kermit was utter perfection.

Best Physical Gag: My favorite bit was possibly the most subtle one: Gonzo and Camilla having dinner while they’re both playing with their smartphones, Camilla pecking at hers with her beak.

Lamest Joke: I wasn’t crazy about Fozzie’s “acting”.  Fozzie is great when he’s naive, but not so much when he’s played as stupid.  Come on, bear, you know that acting is different from quoting Star Wars with a weird Christopher Walken-esque brogue.

Missed Opportunity: No Bunsen and Beaker at laser tag?  Seeing as how the duo have been so underutilized on the show, it could’ve been nice to see Beaker get zapped a few times.

Best Puppetry Moment: The obvious one that stands out is Gonzo and Camilla’s couples yoga pose, which I’m still not sure how they achieved it.  But slightly subtler: Kermit using scissors!  Think on that one, folks.

MVP (Most Valuable Puppeteer): Matt Vogel for the win!  He had a tough job introducing a new character to the show who also happens to be a fan favorite.  Robin is officially in good hands.  Literally.

Guest Star Watch: Good Morning America‘s Lara Spencer is the only celeb this time, and it’s pretty great to see an episode of The Muppets that doesn’t rely on human beings for anything more than a cameo.  Spencer did a fine job, with a bit of an Easter egg for GMA viewers who happened to notice that she has a long history of flirtation with a certain King Prawn.

One More Thing: Did anyone else notice Gonzo’s Electric Mayhem t-shirt during the yoga scene?  I want!!!

Okay, One More Thing: I would watch an entire half hour of just The Swedish Chef putting on his own Muppet Show with characters made out of food. 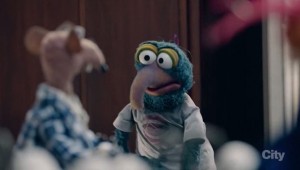 Click here to melt your Chewbacca on the ToughPigs forum!