I love comic books.  I also love Sesame Street, but you probably knew that already.  But my second love is comics, what with their penchant for superheroism and bright colors and sequential art.  So when the worlds of Sesame Street and graphic novels collide, I’m bound to get excited.

What’s really exciting isn’t just that there’s a new Sesame Street comic book (the first issue out of six is in stores now), but that it’s so good.  Amazing art, great writing, not too sappy, fun for both kids and people-who-claim-to-have-grown-up.  It’s presented in anthology format, so we also get a mix of different types of stories in different styles. 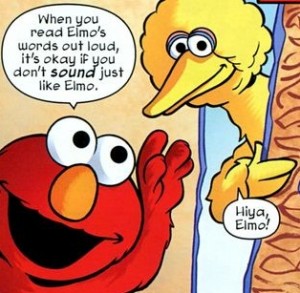 The first story is the most educational, and the most logical for this type of book.  It never occurred to me that kids might not know how to read a comic book, so Elmo teaches a lesson on how to read word balloons, dialog boxes, character voices and more.  Funny how Elmo accomplished in one page what Scott McCloud took an entire book to explain. 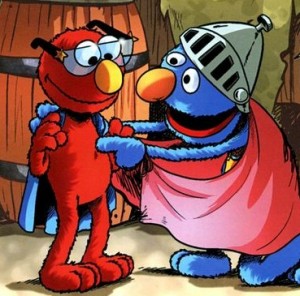 Next up is “Super Elmo” (which was reprinted in this year’s Free Comic Book Day issue), written by Jason M. Burns (who wrote the previous page as well as a Fraggle Rock comic book story) and illustrated by one of our all-time favorite artists, Amy Mebberson.  Amy also provided all of the variant covers to the comic, which really gives a legitimacy to this series, because of her talent and her strong connection to the Muppet fan world.  In this story, we get what we all really wanted: Sesame Street superheroes.  Super Elmo teams up with Super Grover to learn a few lessons on how to be a hero.  It’s really touching, and it gives Amy Mebberson the opportunity to draw Super Elmo pushing the earth away from a black hole and Super Grover flying into a lamp post.  Clocking in at 12 pages, it takes up the bulk of the issue, and it’s worth every panel. 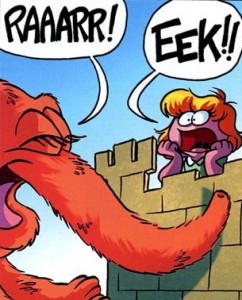 Another close friend of ToughPigs, Jay Fosgitt, provided two stories for the comic.  You may remember the time when Jay made a proposal for a Muppet comic back when those were still being published, and we were flabbergasted as to why it never happened.  We’re incredibly happy to see Jay get another chance at writing and drawing Muppets in an official capacity with this comic book.  His first story is “Little Castle Built by Prairie”, starring the unlikely pair of Prairie Dawn and Mr. Snuffleupagus.  It’s funny and adorable, and I want Jay to put together an entire book just like this. 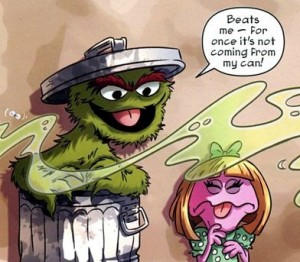 Paul Morrissey (another Fraggle comic alum) wrote the next story, “Smog Day Afternoon”, all about how Sesame Street stinks.  No really, there’s something rotten in Denmark, and Oscar is loving it.  Prairie Dawn, however, is not too happy about the pungent stench on her block, as most of us would agree.  The imaginations of both parties run wild, but it’s Oscar who wins in the end, who surprisingly gets to keep his horrible aroma around.  It’s nice to see Grouchiness win out once in a while. 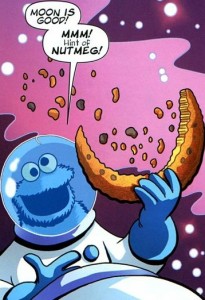 Patrick Storck, co-writer of Muppet King Arthur and writer of the underwhelming Muppet Sherlock Holmes has returned to the Muppet world with “A Dip in the Galaxy”.  Thankfully, his story about Cookie Monster imagining the moon as a giant cookie isn’t nearly as offensive as some of his previous work, but it’s also the least original story in this entire book.  Cookie Monster compares the moon to a cookie in his most well-known song, he tweeted his moon/cookie observation to NASA, and he even sang an entire song all about the moon being a cookie.  We at ToughPigs even poked fun at Cookie’s love/hate relationship with the moon in one of my favorite articles that I ever wrote.  I’m not saying Patrick Storck is a bad writer, just that he’s got to try a little harder to make a splash in the Muppet comics world. 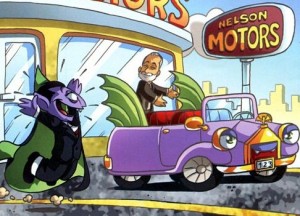 Next is my favorite page in the entire book.  The second story written and illustrated by Jay Fosgitt, “The Count Counts” stars The Count (natch) daydreaming about his Countmobile.  Once again, it’s cute and educational, but what sets it apart is a very special cameo by the late, great Jerry Nelson (who is apparently a car salesman in The Count’s imagination).  Coming so soon after Jerry’s passing, it’s the perfect, subtle homage to his Sesame Street legacy.  Nice one, Jay. 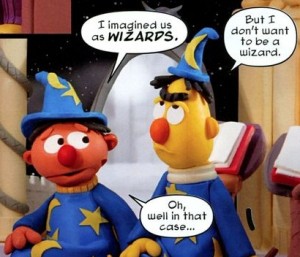 The final story is an odd one, made up of screenshots from episodes of “Bert and Ernie’s Great Adventures”.  It isn’t an adaptation, but a new story made up from pre-existing photos.  Jason M. Burns does a good job at creating a coherent narrative, which I imagine would be pretty tough under normal circumstances.  But since folks like us know where the art came from, it makes for a so-so ending to what’s otherwise a stunning book.

Anthologies are generally hit-or-miss, but even the “misses” in the Sesame Street comic book are great.  I love the varying art styles, the different types of stories, and the fact that it’s not too bogged down by the educational directives to keep it from being a heck of a lot of fun.  I couldn’t be more pleased with this book, and I can’t wait for the second issue.  And that comes from a guy who really loves comics.  And Sesame Street.

Click here to get superpowers on the ToughPigs forum!