Click here to read our review of The Muppet Show Comic Book #2, also due in stores this week! 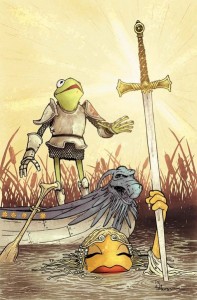 Picture this: A ragtag group of knights from very different backgrounds sitting around a round table discussing how to retrieve a fancy cup. Now exchange “knights” for “frogs and bears and chickens and things”, “round table” for “Murphy bed” and “fancy cup” for “Baseball Diamond” and the jump from King Arthur to the Muppets isn’t quite so drastic.

The first issue of Muppet King Arthur hits your local comic book store this week, and this debut issue features a green Arthur seeking out Excalibur, yanking it out of a rock, and figuring out what the heck he can do with it. Along the way, he clashes with Sir Sam the Eagle (who is once again inexplicably British), meets a groovy hippie chick in a lake, makes a magical friend in Rowlf’s familiar identity from The Jim Henson Hour, and (spoiler!) becomes King of England.

Luckily the King Arthur story isn’t as well-known as Robin Hood or Peter Pan, so there are still plenty of surprises, especially when it comes to wondering how the Muppets will fit into the parody. 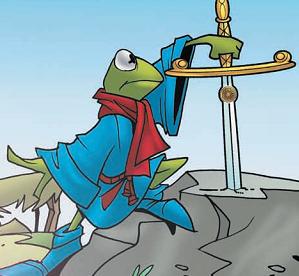 Writers Paul Benjamin and Patrick Storck do a great job at meshing the King Arthur legend with the mayhem of the Muppets. They’ve got the voices of most of the characters down pat: Kermit is snarky yet humble, Miss Piggy is self-centered yet not evil (despite her being cast as the villain), and Sam is strong-willed to an obnoxious degree. I was disappointed at the silence of characters like Gonzo and Animal, who appear as Sir Lancelot and Sir Gawain but have exactly zero dialogue. Fozzie, on the other hand, has plenty of dialogue, but every line is a pun. And while Fozzie should most definitely be punning as much as possible, it got tiresome after the second page.

Dave Alvarez, who has provided many brilliant Muppet comic book covers, handles the interior art and it’s great to finally see him tackle a real narrative. Rather than try and make the characters look like the puppets, Alvarez caricatures each Muppet so they are incredibly expressive while still wholly recognizable. This may be the cartooniest versions of the Muppets that we’ve seen in years, and the style is a perfect fit for a funnybook like this. 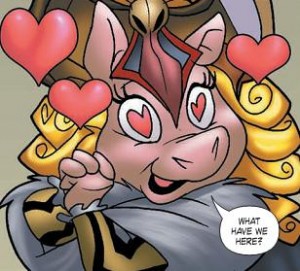 The highlight of the book for me (and for all you obsessive fans like me) were the in-jokes that the writers and artist slipped into the story. The cover art revealed the appearance of the silhouette of a famous Muppet dragon, and other cameos include an oft-imitated Dark Crystal character and a small group from one of the Tales of Muppetland specials. I’ll leave it up to you and your keen Muppet-spotting eye to identify the cameos in question.

The first issue of Muppet King Arthur was 24 pages of fun, and I can’t wait to see where the rest of the miniseries will lead us. Probably to some sort of grail, but that’s all speculation.

Click here to pull a sword out of the ToughPigs forum!