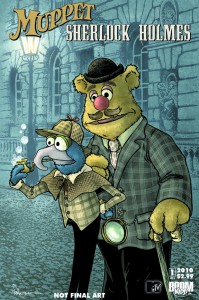 The first issue of Boom! Kids’ Muppet Sherlock Holmes comic book is out today. Coming right after Muppet Snow White, the previous adaptation comic, it has some pretty big shoes to fill… and I’m afraid it doesn’t fill them.

In this issue, Sherlock Holmes (Gonzo) and Watson (Fozzie) are summoned by Inspector LeStrade (Kermit) to investigate the mysterious illness of Julia Stoneleigh (Wanda), sister of Helen Stoneleigh (Janice). They go to Stoneleigh Wildlife & Preserves – a name that leads to several puns – where Julia lies ailing, and check out all the suspects, including Julia’s fiance (Wayne), the butler (Nigel), and a large venomous snake. Holmes suspects that Julia is being poisoned, and he sets out to determine who the culprit is.

So why doesn’t it work? It could be that Sherlock Holmes is just not a good basis for a Muppet parody. It looks like each issue of this series will be an adaptation of one classic Holmes tale, and this one takes on “The Speckled Band,” which is a cool story, but you know what? There’s nothing funny about it. I guess there’s not much that’s funny about Snow White either, but it has quirky elements like talking mirrors and seven dwarfs that lend themselves to comedy a lot more easily than murder by poisonous snake.

It could be that the characters from the Holmes stories don’t correspond well to the Muppet cast. Other than Holmes and Watson (and Dr. Moriarty, who may or may not make a foreshadowy appearance in this issue), the original stories don’t have any iconic characters. Readers might say, “Ha, it’s Kermit as King Arthur” or “Ha, it’s Piggy as Tinkerbell,” but nobody’s going to say, “Ha, it’s Rizzo as Dr. Roylott.” Even the two leads don’t quite click. I was intrigued by the notion of Gonzo as Sherlock Holmes, but unfortunately there’s not very much that’s particularly Gonzo-like about him. He’s just a silly detective. Fozzie-as-Watson is pretty much the same way, although he does get a few good/bad jokes in.

I don’t know, maybe my expectations were too high because this series is written by Patrick Storck and drawn by Amy Mebberson, both of whom have done such terrific work on past Muppet comics that anything less terrific suffers by comparison. Anyway, the great thing about the Sherlock format is that next month we’ll get a completely different mystery, possibly one that lends itself better to parody. Hmm… Is there anything funny about “A Scandal in Bohemia?”

Oh, and I should mention something I did like: It continues to be a delight every month to see which obscure Muppets show up in the comics, and there are some good ones here. Although, I always wonder about the casual fans who read these things, and there must be a lot of them because the comics keep being published. When they read this thing, are they aware that Wayne and Wanda and Nigel are old Muppet Show characters, or do they just assume they’re generic Muppety-looking people created for this issue? Or do they even think about it for more than half a second? Anyway, it’s great that Muppet comic books are being created by actual Muppet fans. 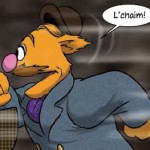 Click here to wear a deerstalker on the Tough Pigs forum!