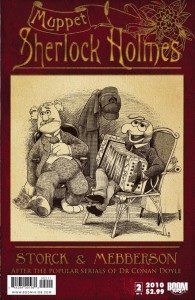 Last month, the first issue of the latest Muppet comic book miniseries, Muppet Sherlock Holmes, came out and our review was slightly less than positive. Okay, so we kinda hated it. I approached the second issue with some trepidation, and I was disappointed to see that the quality is about the same. But pleased, because writing negative reviews is always more fun than writing positive ones.

The story involves Gonzo/Holmes, Fozzie/Watson, and Kermit/Lestrade sneaking into a party at Miss Piggy/Adler’s mansion, where hilarity attempts to ensue. There are some fun gags, including one where our trio hides in a call box, a mail box, and a bush. And another when they create a series of distractions at Piggy’s party. But I noticed one glaring omission: This issue didn’t have a mystery. Sure, Gonzo was playing the part of a private investigator, scoping out the party with a series of disguises and ruses, but he never had to use his keen sense of elementary, my dear readers. And therefore it didn’t feel like a Sherlock Holmes story at all. Or at least, not like a parody of one.

My biggest problem with the issue is that none of the characters sound at all like themselves. Considering the fact that most of the other Muppet comics have that as a constant, this ends up being a pretty glaring error. Gonzo is manic, but not in his normal artistic/weirdo ways. Fozzie seems nervous and quiet, as opposed to under-confident and over-helpful. Kermit is almost happy-go-lucky, which doesn’t quite fit for either Kermit or Inspector Lestrade. Even the minor characters like Link seem to be shoehorned in without any consideration to their voices. Suddenly the Muppets seem interchangeable, as if this same exact script could work with characters from any other franchise. (Toy Story Sherlock Holmes? Winnie the Pooh Sherlock Holmes? The Ultimate Avengers Sherlock Holmes?)

Another problem is that the story is, dare I say, dull. Notice above that I summed it up in one sentence. Now stretch that out to 22 pages. Feel cheated? Me too. Writer Patrick Storck does all he can to fill in the gaps by cramming every panel with jokes, and most of them fall flat. For example, when Gonzo impersonates “Eddie San Tesla” to infiltrate Piggy’s party, Kermit says, “Hopefully nobody in there DOES know better.” And Gonzo replies, “This Mr. Better, is he a friend of Tesla’s?” Yep, he thinks “Better” is a person, and not the commonly used adverb. Sadly, this is not an isolated incident.

One improvement from the previous issue is that letterer Deron Bennett fixed that annoying problem involving different sized fonts in every word balloon. I don’t normally notice something as common-place as lettering in a comic, but it was pretty distracting in issue #1. The lettering is back to normal here, and I’m pleased that I don’t have to complain about that again.

Of course, the one thing I could never complain about is Amy Mebberson’s work. Her illustrations are the only thing that makes this book worth picking up. Every character looks pristine, and you can tell that Amy is having fun putting them in period clothing, with the hairstyles and mustaches of the time. She also does a fantastic job at slipping recognizable characters into the background. The highlights for me: A monocled Bunsen Honeydew, Behemoth in a bow tie, a multicolored JP Grosse, the back of Bert’s head, Gonzo dressed as Marvin Suggs, and even a blink-and-you’ll-miss-it cameo by Yorick. Take away all of the word balloons, and this comic becomes pretty great, thanks to Amy.

Speaking of art, this issue is the first that doesn’t feature an alternate cover by David Petersen. Which is a huge bummer. Hopefully it won’t be long before he’s back, because I miss his spindly-legged Kermit.

What this issue does have is an activity page, featuring a few connect-the-dots games and some fill-in-the-letters words. It’s a cute idea, though a little young-skewing for a Sherlock Holmes book. Still, I don’t hate the idea of including activity pages in Muppet books. I’m still in awe of Katie Cook’s pages in the Fraggle Rock comics, and I think it might be cool if BOOM stole that idea.

I wanted to enjoy Muppet Sherlock Holmes pretty badly. The idea behind it is a solid one, and Amy Mebberson is the most reliable Muppet artist working today. But somehow Patrick Storck found that magical combination between convolution and dullness, along with a healthy dose of unfunny puns. I’ll be happy when the next two issues go by, but with no new “Muppet Fairy Tales” book scheduled for December, I’m worried that this might be the line’s swan song. That is, unless I missed a clue…

Click here to wear a monocle without having eyeballs on the ToughPigs forum!