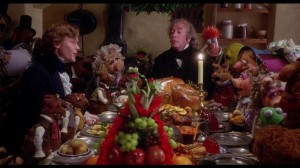 I have something to admit.  I never bought The Muppet Christmas Carol on DVD.  Sure, I got it on VHS way back when it originally came out, but when the DVD was released, I didn’t bother adding it to my collection.  I knew that there would eventually be a super-special release, chock-full of bonus features and exceptional video quality.  It only took 20 years, or 10 years since the DVD release, to get it.  Totally worth the wait.

Just in time for the holiday season, Disney finally answered our pleas and began the long road to releasing the Muppet films in HD-quality Blu-Ray.  It’s interesting to me that they chose to start with The Muppet Christmas Carol, rather than The Muppet Movie (which is coming to Blu-Ray sometime in 2013).  Maybe they wanted to test the waters with the best post-Jim film before tackling the original trilogy?  Or maybe, like us, they just love the movie so much that they couldn’t wait another minute before getting it onto shelves. 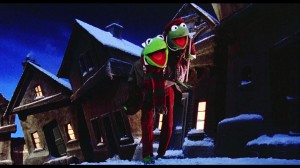 I’m assuming that you’ve already seen the film, so there’s no reason to review it in this space.  In case that’s why you came here, here’s all the review you need: The Muppet Christmas Carol is brilliant, awesome, and you should own at least three copies of it in various forms of media.  There.

The best feature of the Blu-Ray has got to be the crystal clear, high definition video quality.  Unfortunately, I don’t own an HD TV, so I can’t see it the way it was meant to be viewed, but I can still see the difference.  Especially compared to the VHS I usually watch.

A few bonus features from 2002’s DVD release made the jump, like the bloopers, a behind-the-scenes featurette, a feature about Christmas around the world, and Brian Henson’s commentary.  I can’t tell you how happy it makes me to have home video releases that look behind the curtain of the Muppets, even if the features are 20 years old.  Brian’s commentary is especially enlightening, as he doesn’t censor himself at all when revealing the secrets of the film.  If you’re interested in raised sets, marionettes, and forced perspective, then you owe it to yourself to watch the movie with this commentary. 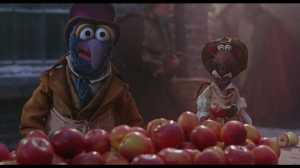 Totally overshadowing Brian is a second commentary starring Kermit, Gonzo, and Rizzo.  (Of course, not all at the same time.)  Really, it’s a commentary starring just Gonzo and Rizzo, with cameo appearances by Kermit, Statler, Waldorf, and the real Charles Dickens.  But who better to comment on the film than our omnipotent narrators?  Sadly, this may be as close as we get to a commentary by the Muppeteers, but at least we get a little insight from Steve Whitmire and Dave Goelz.  Only a little bit of what they had to say was about actually working on the film, while the majority was filled with scripted jokes and their (possibly genuine) reactions to seeing the movie again.  Although I would’ve preferred an actual Steve and Dave commentary, this one works particularly well, mostly because it’s hilarious.  I laughed through the entire thing.  Here’s a few examples of the funnier and more poignant/Muppet Wiki-worth comments I managed to jot down: 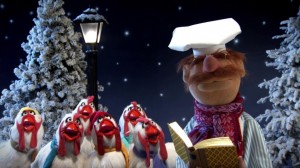 I’m loving the new “Disney Intermission” feature, which plays videos when you pause the movie.  Not because I need to be constantly entertained while taking a movie break (even though I do), but because it gives the Muppets an excuse to come up with new content.  These Intermission clips aren’t as good as the ones from The Muppets Blu-Ray, but they’re still quite enjoyable.  Each clip features a group of rats, penguins, or rats knocking on a door and singing Christmas carols.  One thing I especially like is that only one core character (not counting a rat who may or may not be Rizzo) appears in the series.  In what is probably the funniest and most satisfying of the Intermission features is the Swedish Chef reading “‘Twas the Night Before Christmas” in his native tongue, backed up by singing chickens.  If that doesn’t get your Muppety Christmas alarm going off, I don’t know what will. 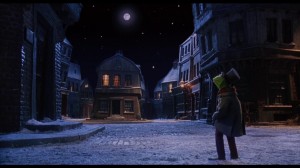 And now for the bummer: This release does not include the controversial “When Love is Gone“.  Whether you think the song stops the movie dead in its tracks or not, there are two very good reasons for keeping it in the film.  First, it provides a more thorough motivation for Scrooge by clarifying his heartbreak and disdain for the Christmas season.  And second, because it’s a piece of Muppet history and who are you to keep that from us, Disney Home Video??  Apparently they even altered the theatrical version (which does not include the song) to make the transition a little less confusing, which you can see compared in this handy video put together by the good people at the Muppet Wiki.  Still, the fact that the song doesn’t appear as a bonus feature seems unforgivable.

All in all, I’m incredibly pleased to finally have The Muppet Christmas Carol in convenient Blu-Ray packaging and no longer in my oversized VHS clamshell.  Not just because it saved me a half-inch on my DVD shelf, but because it’s representative of what Disney may be bringing to us soon: More Muppet stuff in the best quality available.  I look forward to the day when I can have the entire Muppet library at my fingertips without having to rewind when I’m done. 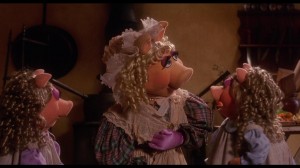 Click here to save my little broken body on the ToughPigs forum!