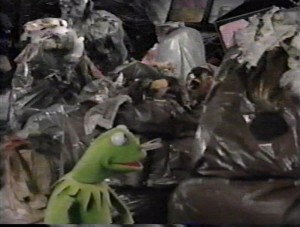 Most episodes of The Jim Henson Hour‘s MuppeTelevision have a theme that ties the whole episode together. Sometimes, as with the “Oceans” episode, that theme is also relevant to the second half-hour of the show. Today’s MuppeTelevision segment is called “Garbage,” and unfortunately, this is right about where that title became applicable to the whole series. This is the last episode of The Jim Henson Hour aired by NBC before the network tossed the show in the Dumpster of cancelled television.

But you know what? Even though the show wasn’t on very long before it aired its last episode, The Jim Henson Hour managed to cram in an awful lot of firsts, and a bunch of them are on display in this episode. Let’s take a look.

For one thing, there’s the garbage itself. Sure, by this point there had been Muppet animals of every species, as well as monsters, robots, and even singing fruit. But this episode of the show should have won a special achievement Emmy just for introducing talking garbage into the Muppet menagerie, in a control room plot that finds Kermit trying to keep the show moving while surrounded by piles of increasingly restless sentient refuse. And as Jim Henson shows us in his outro, the puppets were made with real garbage bags, which must have aided immensely in cleaning up the studio after they finished shooting.

I may mentioned this in a previous episode review, but The Jim Henson Hour also introduced the notion of casting non-guest-star actors in sketch roles on a Muppet program. In the Bootsie and Brad sketches, human actors play Barbie and Ken dolls, complete with severely limited joint movements, as they grapple with such significant issues such as what happens to Bootsie when she gets covered in dog slobber. Those guys crack me up, and the writers must have liked them too, as they show up in a remarkable four out of eight MuppeTelevision half-hours. Muppet performer Dan Redican also appears in a couple of sketches over the course of the series, and writer Chris Langham pops up in several roles, from an old lady in “Videotape” to the subject of an animal-hosted documentary in this episode.

Speaking of which, I believe this episode includes the first attempt at a Muppet TV show sketch that was filmed on location. This sketch finds a bear documentarian and a raccoon anthropologist named Dr. Emile Lundquist observing the strange behavior and rituals of the human species. The sketch is a short one, but the fact that they actually filmed outdoors in a real backyard sells the concept in a way a physical set or digital backdrop couldn’t have. Also, I love that the raccoon’s name is Dr. Emile Lundquist.

Oh, and this episode features the first-ever human anatomy lesson in a Muppet production! In the Bootsie and Brad sketch, Brad asks Bootsie about the difference between girls and boys, and she replies, “Girls have bumps!” And then there’s a callback to the joke in the documentary sketch, thus ensuring that all the children watching at home will understand exactly what separates the sexes.

Then of course there’s Waldo. Anthony or I might have more to say about him in a future installment, but Muppet Central’s resident computer graphic shows up in this episode to do his usual schtick of turning into different characters and objects while doing funny accents, a routine later ripped off shamelessly and obviously by Robin Williams for his performance as the genie in Aladdin. As a digital puppet operated in real time, Waldo himself was genuinely revolutionary in 1989. Just think: If it weren’t for Waldo, we never would have had Tizzy the Bee! Or Gerald from Sid the Science Kid! Or that cool animated talking Mario that can have a conversation with you at the World of Nintendo store in New York, which I can only assume uses some similar technology. 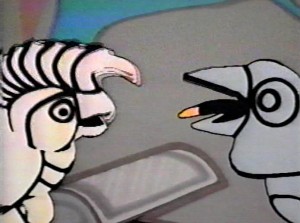 Speaking of technology, I can only assume this episode was the first-ever use of whatever process they used to create the segment where Kermit tells the story of how all the birds of the world got their colors. I really can’t tell how they did it. The birds all appear to be puppets, but with a computery outer layer that starts out gray and later changes to each bird’s hue of choice. Plus they’re seen flying across the screen with no rods, arm socks, or puppeteers visible, so it’s all very impressive and I’d love for someone to explain it to me like I’m a dodo bird.

Yes, this series and this episode are full of firsts. I could go on: This episode has the first Muppet guest star with an all-lowercase name in k.d. lang (Sadly, e.e. cummings had been dead for 14 years when The Muppet Show began or he might have set the record). lang has two delightful musical numbers, one of which is “I Love Trash.” There’s also the first Muppet cover of a Willie Nelson song, with the garbage performing “On the Road Again” on a barge in a final number reminiscent of TMS‘s”In the Navy.” And so on.

We’ve tried to be honest with our criticism about The Jim Henson Hour and what aspects of it just didn’t work, but you definitely can’t say it was short on new ideas. If it had gotten a second season, Jim and his collaborators might have figured out a way to take all those ideas and present them in a more coherent and cohesive package. But sadly, this episode got the same old bad ratings as its predecessors, so NBC pulled the plug. Fortunately for us, we still have a few more episodes to watch that didn’t make it in the original run.

Who is The Storyteller for? It was nominated for three Emmys in children’s programming categories, and it certainly stimulated the imaginations of many of the kids who managed to see it, but it can be pretty dark at times. “The True Bride” includes an innocent girl enslaved by a troll who beats her. “The Soldier and Death” ends with the main character wandering the earth forever because he can’t get into heaven or hell. The denouement of “The Heartless Giant” happens when a guy squishes the giant’s heart so he drops dead.

There’s definitely something to be said for preserving the classic fairy tales, presenting them as they were originally conceived rather than the way Disney would do them, and for not shielding kids from every little scary thing. Still, this show should probably come with a sign reading “You Must Be This Tall to Experience These Fairy Tales.” 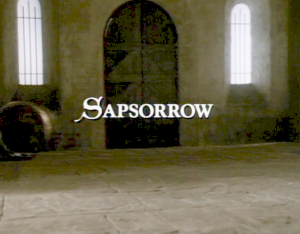 “Sapsorrow” may be the most accessible episode of the show. Which is perhaps unexpected, because it’s also the least creature-heavy. But it’s also light on scary stuff, and it has a protagonist who’s easy to sympathize with and root for. It doesn’t take itself too seriously, with the comedy team of Dawn French and Jennifer Saunders providing several laughs in supporting roles. And the final act of the story shares elements with one of the most famous fairy tales, but it’s different enough to be interesting. Any viewer of any age could jump into this episode without being weirded out.

Well, maybe they would be weirded out by the fact that the catalyst for the whole plot is a young woman being forced to marry her dad.

Storyteller episodes were adapted from the folk tales of various cultures, with series writer Anthony Minghella taking liberties as he saw fit to make them work for television. This one is mostly based on a German story recorded by the Brothers Grimm, called “Allerleirauh.” (You can see why Minghella changed the title to “Sapsorrow.”) Variations on the story appear across many cultures, including one called “Little Catskin” which is from the far-off land of Kentucky. But there’s always a girl who’s forced to get married against her wishes, and very often it’s to her father.

For the most part, Minghella’s adaptations retained the logic of fairy tale reality… which is to say, a lot of crap that happens on The Storyteller doesn’t make a lot of sense. Why does Hans My Hedgehog ride a giant rooster, anyway? But this episode is relatively free of that stuff, which works in its favor. I mean, it’s pretty stupid that the titular princess Sapsorrow has to marry her father just because the royal ring fits on her finger. But her response is pretty smart — she stalls for time by requesting incredibly elaborate and distinctly-colored dresses for the wedding, and while the royal tailors are cranking those out, her animal friends make her a disguise so she can flee the kingdom without being recognized. 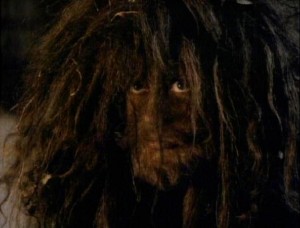 That’s where the Creature Shop shines in this episode, with the creation of Sapsorrow’s dirty, hairy “Straggletag” costume. You can still make out Sapsorrow’s facial expressions, but they really pulled off the “poor creature of fur and feathers” look. By the way, I’ve seen this episode at least a dozen times, and it was only on this viewing that I realized Sapsorrow/Straggletag is played by Alison Doody, aka Elsa from Indiana Jones and the Last Crusade.

It makes less sense that Sapsorrow falls in love with the prince she ends up working for in a neighboring kingdom, a snob who repeatedly belittles and insults her. On the other hand, a lot of people harbor crushes on those who won’t give them the time of day, so maybe this is the most tragically believable thing to happen on The Storyteller.

That snobby prince eventually falls in love with a mysterious woman who attends a series of royal balls wearing incredibly elaborate and distinctly-colored dresses. As she runs away one night, she loses a slipper, leading the prince to vow that he will marry the woman whose foot fits the slipper, and leading the audience to ask, “Hey, did they steal this from Cinderella?”

But here’s where The Storyteller diverges from tradition. Cinderella was always conventionally beautiful, both before and after her bibbidi-bobbidi-makeover. When the prince discovers that the slipper fits the Grizzlor-like creature he knows only as Straggletag, he could easily announce that he changed his mind, but he sticks to his promise. This is an admirable twist on the old concept, although it’s never quite clear when he suddenly became so open-minded. Still, it goes a long way toward making him seem as deserving of a happily-ever-after as our hero Sapsorrow.

In a recent interview with New York magazine’s Vulture blog about current plans for various Henson Company franchises, Lisa Henson said she has considered producing a new series of Storyteller episodes. I’d like to see that happen. There are certainly still heaps of folk tales unfamiliar to most audiences, and it would be fascinating to see if today’s top fantasy writers and directors could adapt the old stories in ways that stand up to the standards of modern storytelling. And if they were to look to the original series for inspiration, they could do worse than to take a few cues from “Sapsorrow.”

And that was it for The Jim Henson on network television. Muppet fans would have to wait a few years to see the next episode, when it popped up on Nickelodeon. And it’s a doozy, as Jim Henson tells us everything we always wanted to know about Muppets, but were afraid to ask. Stay tuned!

Click here to get covered in dog slobber on the Tough Pigs forum!