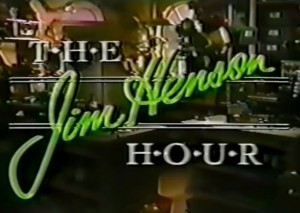 Welcome back to My Weeks with The Jim Henson Hour! So now we’ve watched every episode, and last time around, Anthony Strand covered the Inner Tube pilot that served as the seed from which the strange but colorful Jim Henson Hour flower grew. But there’s one more thing to watch, and that’s Jim Henson’s pitch reel from 1988, which was produced to convince the networks to buy the new show.

In this little production, Jim Henson hangs out in the Muppet workshop, wearing a sweater that would make great camouflage in a herd of zebras, and explains what the new show will look like. (Illusion-shattering fact alert: It’s not really the Muppet workshop. It’s just a cool set full of nooks and crannies and puppets that come to life.) In these reviews, Anthony Strand and I have mentioned more than once how the tonal inconsistencies of The Jim Henson Hour probably contributed to its demise, but as seen here, the original concept was even more all-over-the-place.

Here it is, as painstakingly restored by Muppet fan and media wizard Garrett Gilchrist:

As soon as Jim starts talking, it’s clear that what he has in mind won’t be like anything else on TV.  This hypothetical Jim Henson Hour will have a rotating format that changes every week: The first week will be an hour-long version of The Storyteller, the second week will be a “Muppet Show of the future” called Lead Free TV (which is apparently just a new name for Inner Tube), and the third week will be a “picture-book special” like Emmet Otter or Tale of the Bunny Picnic. 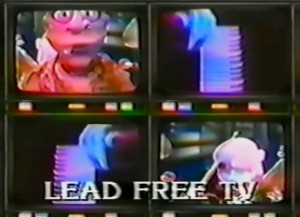 So let me get this straight, Jim. You want your show to be 25% dark fantasy, 25% bizarre Muppets surrounded by omnipresent technology, and 25% magical fluffy bunnies. So far, this is sounding like a show with the worst identity crisis in the history of television. And it sounds awesome.

Which is to say it sounds awesome to me, a diehard Henson geek whose favorite TV shows have a tendency to get canceled fairly quickly.  Most TV viewers like to have a general idea of what to expect when they tune in to a series every week. Even if the show had stuck to the four-week schedule, you can’t expect the audience to keep track of which week in the rotation it is. “Let’s see… Is this a Storyteller week or a picture-book week? Last week was Lead Free… or was that the week before? Ah, forget it, let’s just watch 60 Minutes.”

And what about families with small children? Back when The Storyteller and The Jim Henson Hour aired on TV, I was old enough to watch them, but my younger siblings were occasionally frightened by the various evil giants, screeching griffins, and tentacle monsters seen on the show. I wasn’t scared, of course. I wasn’t scared of any of it.  As long as there was no blood.  And all the lights in the living room were on. But it would be tricky for parents to figure out a Jim Henson Hour viewing plan where the whole family could watch weeks two and three, but Baby Betsy had to stay in her room for week one while Johnny got to watch the show.

I’m probably over-thinking it. But I’m not the only one, because the network didn’t buy the show until Jim agreed to make the format more predictable. It’s an understandable decision.  Can you imagine anything more disorienting for a viewer? 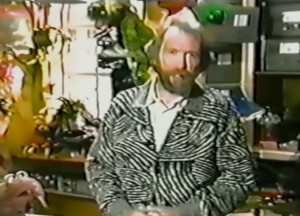 Jim Henson could. Week four, he says, will be devoted to shows where “almost anything can happen.” Like what? “We might do a mystery with Kermit and the gang, or a comedy about an enchanted bowling ball, or we might also do a musical that takes place in a spaceship with creatures unlike anything you’ve ever seen before.”

By the way, the enchanted bowling ball idea was also mentioned in Jim Henson: The Biography, which makes me wonder if there was ever an actual script, or at least an outline or some notes. I, for one, would love to see this production in some form. Hey, Jim Henson Company! As long as you’re making terrific comic book adaptations of Jim Henson’s lost projects like Tale of Sand and The Musical Monsters of Turkey Hollow, how about giving us Jim Henson’s Highly Amusing Enchanted Bowling Ball?

The show Jim describes sounds like it would be incredibly fun for him and his gang of mad geniuses to produce.  But it would also be really, really expensive.  Everything except Lead Free TV, which would presumably have the same cast and setting every episode, would require completely new sets and puppets to be built, not to mention all the fancy special effects.

Maybe that’s why Jim makes it a point to assure the viewer that, along with all the crazy new stuff, everyone’s favorite Muppets will be along for the ride.  You know, the Muppets!  The stars of hit movies and the most widely syndicated show in the world!  Guys like Gonzo, Kermit, Piggy, and Animal, all of whom pop up in this presentation.  It’s like Jim is saying, “Yeah, sometimes we’re going to do weird stuff like our Labyrinth movie that nobody saw, but other times we’ll do Kermit stuff!” 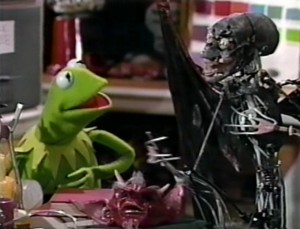 The format merry-go-round wouldn’t make it to the final version of the show, but a lot of the ideas here did.  The Lead Free TV characters would never be seen or heard from again, but Jim’s enthusiasm for computer-generated sets led to their virtual TV station evolving into MuppeTelevision’s control room.  And Jim’s belief that it’s super-awesome to show the audience how Muppets work would carry over to his end-of-episode demonstrations and the entire Secrets of the Muppets show.

Jim concludes his presentation by saying, “We think [The Jim Henson Hour] is an hour families will want to spend together watching quality television. What more can I say?”  That’s the point where I stand up and say, “You don’t have to say anything more!  I’ll take 200 episodes!”  Then I remember I’m not a network executive in 1988 and I sit back down.

The Jim Henson Hour that made it to NBC was a compromise, but it was still jam-packed with ideas.  They even managed to break the “half an hour of Muppets, half an hour of something else” rule more than once in the show’s short run.  And if nothing else, it gave Jim Henson the chance to produce a nice handful of creative stuff that probably never would have gotten made otherwise.

Now we’ve really reached the end of Jim Henson Hour viewing material. But wait, there’s more! Come back next time when Anthony and I will wrap up “My Weeks with The Jim Henson Hour” with a stimulating discussion about the whole shebang. 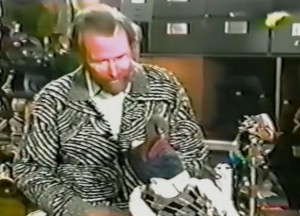 Click here to create a world that doesn’t really exist on the Tough Pigs forum!